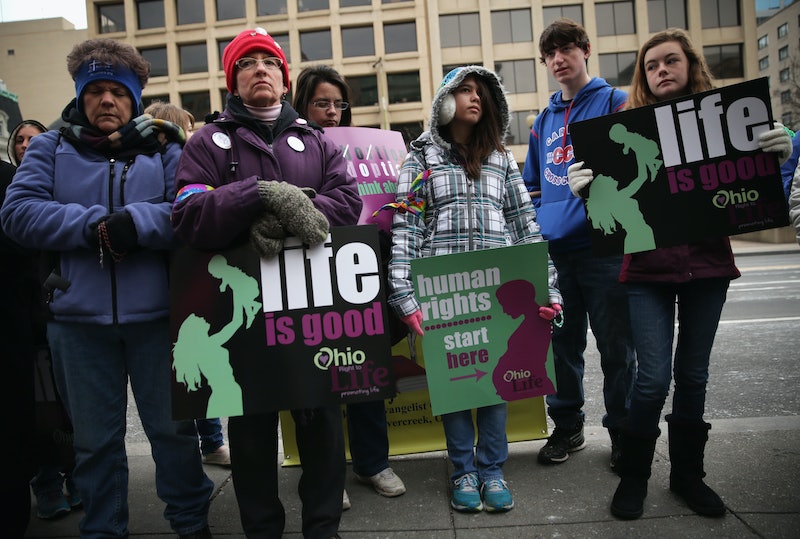 We're going to need to get a good old-fashioned slow clap going to start this off. In a cheap and pathetically transparent bum rush for the Republican presidential candidacy, several Republican nominees, including Rand Paul and Ben Carson (neither of whom are doing very well in the current polls) are getting behind the tragically ironic #WomenBetrayed movement. The hashtag is being used by conservatives on Twitter to spew their anti-choice rhetoric and to try to sell us all on the idea that Planned Parenthood is evil and "betrays women." The joke is on them, because pro-choice activists have taken the hashtag into their own hands to demonstrate that the people women should mistrust and feel betrayed by are conservatives.

Pointing out the hypocrisy of claiming that Planned Parenthood betrays women (one in five women visit Planned Parenthood in their lifetime, so clearly, the organization isn't helping anyone), and also directing attention at the major failings of conservatives to protect women, the hijacked hashtag is kicking ass and making some poignant statements.

Currently, there are 50 cities across the U.S. planning to host anti-choice #WomenBetrayed rallies, but at this point, I think they can all put away their little signs and go home. The hashtag has been thoroughly taken over by pro-choice supporters, who understand what women's rights are really about. It renders the initial message impotent, and, frankly, a little pathetic. Here are some of the tweets that set the record straight about #WomenBetrayed, and put anti-choice protesters firmly in their place.

When Was The Last Time You Did Something About Rape Culture?

There's a serious problem with glorified depictions of rape in film and television (ahem, Game of Thrones), not to mention the fact that plenty of folks still find punch-down rape jokes to be funny. It might be a good idea to think critically about this topic instead of trying to pull much-needed funds from Planned Parenthood.

Ohhhh, there's never been a point at which you've had to worry about being pregnant or having a kid? You're going to sit down and shush now? That's what I thought.

Will Someone Explain Why I Can't Make My Own Sexual Decisions?

I'm not sure I've ever really heard an argument defending this one, even a bad argument. There's just no good explanation for this.

Can You Leave Us Alone So We Can Get Work Done?

Seriously, it's hard enough as it is.

Like STI testing, cancer screenings, and health education services? Just checking to make sure you know what you're trying to completely defund.

In The Meantime, Can We Talk About Your Deplorable Treatment Of Mothers?

I don't hear anyone talking about paid time off for new parents and pregnant workers.

Oh, And About Your Serious Race Problem ...

Anti-abortion groups have been twisting the history of slavery in the U.S. to argue that Planned Parenthood actively seeks to harm black women. *silently rages*