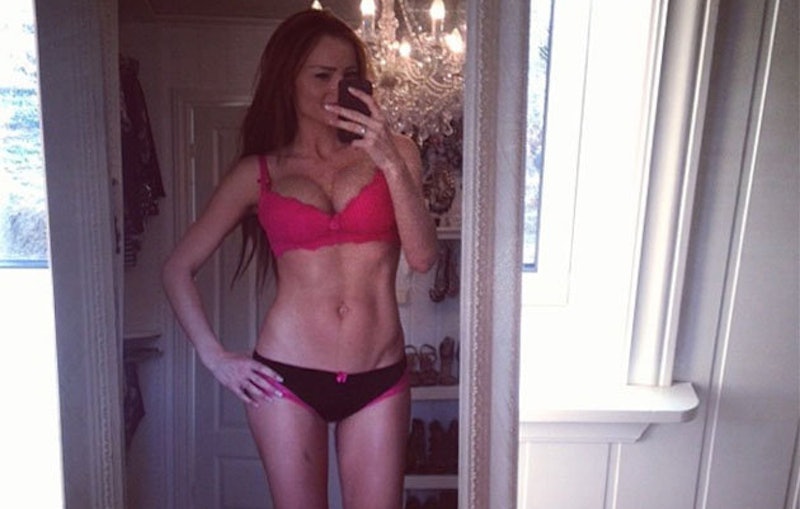 Norwegian fitness blogger Caroline Berg Eriksen, wife of Norwegian soccer star Lars-Kristian Eriksen, recently posted an Instagram picture that would make her the Internet's new Maria Kang. While Americans were busy wallowing in their food comas on November 28, Eriksen was having a photo shoot for one to celebrate the fact that she was no longer eating for two. The result, above, was a selfie highlighting her abtastic post-baby body — a mere three days after giving birth. The picture itself came via Facebook and Twitter with the humble braggiest of captions:

"I feel so empty, and still not 4 days after birth."

Detractors were quick to react with rage, and as soon as the tryptophan wore off, Americans joined the anger party, likening Eriksen to Maria "What's Your Excuse" Kang, who became Internet infamous when she posted a picture of her own super-svelte post-baby bod with the heading "What's your excuse?" And earlier this fall, Lea-Anne Ellison of Los Angeles underwent scrutiny when she posted pictures of herself lifting weights while eight months pregnant.

So what is it about this new breed of "fit moms" that has everyone so angry? And should we even be angry in the first place? The answer to the latter is yes…and no. The problem isn't that moms (or extremely new moms or soon-to-be moms) are uber-fit. The problem isn't even that they flaunt their taught abs and toned limbs for the world to see. The problem comes when there's an expectation that all women can or even should aspire to that.

What made Kang such an easy villain wasn't her body, it was her implication that any woman who didn't have one just like it was lazy. Body size and type are determined by a multitude of factors, including many over which women have basically zero control. Sure, genetics play a role, but what about other pieces of the puzzle? If a woman isn't genetically predisposed to having a Kang-approved body (or even if she is), finding the time to work out to achieve it might not be possible based on her circumstances. Kang is lucky enough to have a supportive partner and the flexible schedule that comes with being self-employed (she owns two residential care homes for the elderly). Kang also has access to middle- and upper-class luxuries like a gym membership. Not every woman has the means to achieve these results, a fact Kang has acknowledged in many a "sorry I'm not sorry" statement since the image went viral.

Now for the "no" portion of that answer. While most critics have focused their ire on exactly the issues raised above, these images have also sparked some debate about how active women should be during pregnancy, for the sake of their unborn child. Ellison faced fire for her CrossFit pregnancy pics, captioned:

“8 months pregnant with baby number 3 and CrossFit has been my sanity. I have been CrossFitting for 2 1/2 years and...strongly believe that pregnancy is not an illness, but a time to relish in your body’s capabilities to kick ass.”

Ellison's critics called her every variation of "bad mother" in the book, claiming that she cared more about her workout, her looks, and her Internet fame than her child-to-be. These fears stem from a long-standing myth that women needed to cease exercise during pregnancy, something past generations believed to be true. Science has stepped in though, like it so often does, to shed truth on the old wives tale. High-risk pregnancy expert Dr. Laura Riley, spokeswoman for the American College of Obstetricians and Gynecologists, said to WebMD:

"You need to be physically active during pregnancy. It has terrific benefits that are associated with a better pregnancy outcome and even shorter labors. It's a win-win for baby and for mom."

The most important thing, experts agree, is for expectant mothers to know their bodies and to be mindful of their pre-pregnancy level of activity. If you lived a sedentary lifestyle before conceiving, jumping into a CrossFit regime to help your post-baby figure isn't a great idea. But if you've been CrossFitting for a while, like say, two and a half years, and want to maintain your level of activity, may be okay to do that — as long as you listen to your body.

So, for a fitness blogger like Eriksen, a former personal trainer like Kang, or a CrossFit enthusiast like Ellison, a runway-ready body after baby might be feasible quickly (within days, if you have amazing Norwegian genes and the means of a professional soccer player to back you up). It's not going to be feasible for everyone. But the point is that neither is wrong and neither makes a woman an inherently bad mother. It's a novel idea, but maybe we could try not judging women's worth in every arena by their abs, or lack thereof.