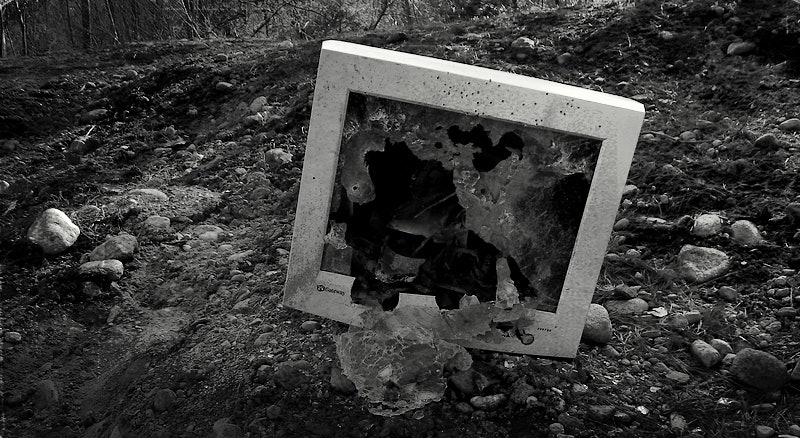 If you are reading this sentence, you're likely doing it on a computer, tablet, or smartphone. But even though technology has become such a central part of our world, have you ever wondered what might happen if it turns on us? After all, technology is only as good as the people who use it... and as these freaky creepypastas about computers drive home, not everyone — or everything — is good.

Perhaps because creepypasta is a uniquely digital phenomenon, a disproportionate number of the genre's stories involve items like computers or cell phones. A lot of the earliest examples of creepypasta were based around technology — “Normal Porn for Normal People,” “The Grifter,” and “Username666,” to name a few — but even as time has gone on, the flow of technological nightmares has not abaited. Many of the stories address our own growing preoccupation with technology, asking how much is too much and what happens when we cross that line; others dive into things like the seedy underbelly of the Internet, which is both demonstrably scary and frightening in its unknowability; and still more have asked whether there is a connection between technology and mortality — or immortality.

Like all creepypastas, there are spookily good technology pastas and laughably awful ones. What the good ones all have in common, though, is this: They're enough to make you swear off technology for good.

Case in point: These seven tales.

You might want to watch yourself the next time you reboot.

It's perhaps unsurprising that a story from Christopher Howard “Slimebeast” Wolf made its way onto this list, but, well… here we are. “Funnymouth” taps into what's arguably the biggest fear about the Internet: You never really know who's on the other end of that screen name. This fear was perhaps more prevalent back in the early days of the Internet — before Facebook and other social networks compelled us all to put our true identities online — but it has by no means disappeared; as such, it still hits a nerve with most of us, especially if you're in the generation that grew up alongside the Internet (rather than after it became mainstream).

Fair warning: If you have nightmares about all your teeth falling out, you might want to skip this one.

Like “Funnymouth,” “Are You Still There?” takes place primarily in a chat room. This time, though, it deals with not the question of who's behind each screen name, but with the fact that text-based chat rooms — again hearkening back to the early days of the Internet, before Skype and webcams and Google Hangouts — only reveal to you so much. We've all experienced the irritation of having someone suddenly stop typing in the middle of a conversation… but have you ever stopped to wonder why they went silent?

“Look Up” deals more with mobile technology than with traditional computing machines — but when you think about it, smartphones are essentially very tiny computers we can carry around in our pockets, so I think they're all more or less part and parcel these days. In any event, “Look Up” is part cautionary tale (like most traditional urban legends); we spend so much time glued to our text messages, email, and social media these days that it's worth remembering what we might be missing by looking down at our phones all the time. It's also, however, partially about the longevity of the Internet. Tons of discussion has circulated recently about “the right to be forgotten” — but what if the real reason we can't wipe our online existence entirely isn't what we think it is?

No, Google Glass (or any other piece of tech from any other company, for that matter) won't turn you into a literal mindless zombie. But “Property of Google” brings up some interesting questions: We all accidentally broke a toy or two when we were kids, right? Whenever we scrawled “Property of” and our names on the bottoms of our favorite toys to stake our claims on them, we more or less made ourselves into the almighty power of our toys' world. It's not something we outgrow, either; if high-tech devices are “toys” for adults, then we continue to assert our control over the things we own even as we continue to get older.

And what happens when those toys break?

In some ways, “Binary DNA” reminds me of “Lost Episodes” — not because of its content, or even due to its style of writing (which, admittedly, has potential, but still needs some work), but because of what it accomplishes: It draws together a whole bunch of classic “weird computer file” creepypastas — “Barbie.avi,” “Smile Dog,” and so on — into one particular universe. I'm not sure I'd call “Binary DNA” an origin story; it does, however, attempt to give all these on-offs a context or a greater meaning.

It's not the most poetic of titles, but this story taps into what I feel is one of the weirdest, most troubling aspects of social media: The question of what happens to someone's accounts after they're no longer able to manage them themselves. Facebook allows other users to make memorialization requests (with the proper documentation, of course) — but there's still something eerie about a Facebook profile with no one to run it. It's like a literal ghost in the machine.

I've generally tried to compile a list for this particular roundup of stories you may not have already read — but I kind of had to include “Psychosis.” A favorite that's frequently cited as one of the best creepypasta stories out there, it might make you not just swear off technology for good, but go kill your computer with fire for good measure. It's long… but it's worth it.