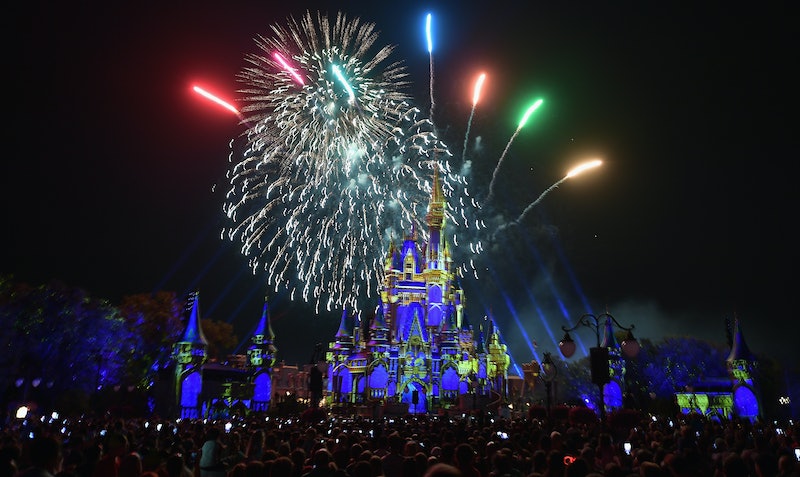 In the big, wide world of creepypasta, there's one I keep coming back to again and again: “Abandoned by Disney.” Written by Christopher Howard Wolf, frequently known by the moniker “Slimebeast,” it does what all good creepypasta should do — have us asking ourselves, "Is 'Abandoned by Disney' real?" While you may already know the answer to this one (hint: You're probably going to be disappointed by it), what makes it so effective is the fact that it has just enough realistic details to make us go, “But… what if?”

Let's take a closer look, because you know you love spooking yourself silly.

According to the story, Disney once attempted to open a resort in Emerald Isle, North Carolina. Called Mowgli's Palace, it allegedly drew its inspiration from The Jungle Book; lush and green, it was meant to showcase the fine attention to detail for which all of Disney's parks and resorts are known. As “Abandoned by Disney” would have it, though, the project was fraught from the start, with locals disapproving of everything from the resort's theme to the fact that a major corporation now owned so much of Emerald Isle's land. Despite the outcry, however, the resort was built anyway — and it even got as far as opening up for business.

But then, it all just… stopped.

The resort was abruptly closed, its employees dismissed, and the whole property shut up tight. The story's narrator describes searching for information on this massively expensive failure and coming up empty, too — Mowgli's Palace had seemingly been scrubbed from record, and even the locals wouldn't answer any questions about it.

In the end, though, our intrepid hero (or possibly anti-hero, depending on how you feel about urban exploration) manages to hunt down exactly where the remains of the decaying resort — so off he goes, camera in hand, to document what's left. He finds that, in the years since Mowgli's Palace's closure, tropical plants have begun to overrun the native flora and fauna; graffiti has sprung up everywhere; the place has been ransacked for anything valuable; and even the animals brought in for the resort have apparently been simply existing in the wild. Scrawled all over the gates and in a few other locations, of course, are hand-painted words stating exactly what happened: Mowgli's Palace has been “Abandoned by Disney.”

As the story continues on, though, it becomes readily apparent that the events described in the tale are fictional. Eventually the narrator discovers a padlocked area labeled “MASCOTS ONLY! THANK YOU!”, which — unlike the rest of the resort — hasn't already been picked over by looters. Instead, it looks… well, not unlike the intention behind the design of the Disney Parks Tower of Terror attraction: As if the resort's employees simply up and left, leaving literally everything behind just as it was. Office supplies, time cards, and even (disgustingly) rotting snacks on the table in the break room remain; the narrator describes the scene like “one of those post-apocalypse movies where everything is left in the state of evacuation.”

But it's in a room marked “CHARACTER PREP 1” that things really go to hell. I'll point you over to the story to read it for yourself — it's definitely worth it — but let's just say that any mascot costume should NOT be able to sit up on its own… let alone do any of the things it does from there.

The proof that the actual events of “Abandoned by Disney” — the search to find Mowgli's Palace, the exploration of it, and what the narrator found when he got there — are fictional lies behind the door of “CHARACTER PREP 1,” of course. It's unclear whether what's actually in those character suits are zombies or something else of a supernatural variety, but whatever they are, they're definitely not of our world. But what about Mowgli's Palace itself? The idea sounds believable — did the place ever actually exist?

As is the case with most creepypasta stories… it didn't. I hate to be the bearer of bad news, but Disney has never even had plans to open a Jungle Book-themed resort in North Carolina, let alone gotten as far as finishing construction on one and opening up shop. But that isn't to say that Disney has never shut down large attractions and left them to be reclaimed by nature; on the contrary, we know of several examples of this in action. And that, I would argue, is the main reason “Abandoned by Disney” has convinced so many people that Mowgli's Palace is real.

Take Discovery Island, for example. An island located in Bay Lake, Florida, it was purchased by Disney in 1965 while Walt Disney World was still in the planning stages. In the '70s, it was opened under the name Treasure Island (we'll talk about why that's interesting in a little bit) as a sort of Disney-run zoo in the decades before Animal Kingdom arrived; later renamed Discovery Island, it remained in operation until 1999. After its closure, the animals that had lived on the island were relocated to the recently-opened Animal Kingdom. A number of possible uses for the island have popped up over the years; one of them even involved teaming up with the folks behind the PC game Myst to create an interactive attraction in which visitors would wander the island, trying to figure out what happened to its inhabitants. Alas, though, it never moved beyond the concept stages, and a few other projects died in the water, too. The island is still there, though — it's just closed to the public. You can see it from the Contemporary Resort, the Fort Wilderness Resort and Campground, and the Wilderness Lodge, sitting quietly in Bay Lake, abandoned and alone.

And then there's the River Country water park. Walt Disney World currently has two operational water parks, Typhoon Lagoon and Blizzard Beach; Typhoon Lagoon has been open since 1989, and Blizzard Beach since 1995. But before either of those splashy attractions arrived on the scene, there was another one — a predecessor: River Country, which first opened its gates in 1976. Meant to embody the feel of an ol' fashioned swimming hole, it utilized Bay Lake for its main body of water, with a dam creating a man-made lagoon that looked surprisingly natural. It closed in 2001, although the precise reason why isn't exactly clear; personally, I suspect it's because the smaller, older park just couldn't keep up with its two bigger, showier siblings.There's another (admittedly not so great) creepypasta capitalizing on some of the weirder, unproven rumors, but again — they're just rumors, and the pasta isn't real.

You know what is real, though? River Country's remains. Like nearby Discovery Island, it wasn't demolished; it was just abandoned. You can see some photos circa 2009 of the abandoned water park over at the DisBoard forums; they're spooky and beautiful and amazing, like those of most abandoned places. It's tough to visit (and also probably illegal) — employees still patrol to keep out trespassers — but I can't help but wonder what it looks like now, six years later. It can still be seen from some of Disney World's ferry services:

But let's go back to Discovery Island's original name for a moment: “Treasure Island.” Swashbuckling, piratical adventures have long been a part of Disney's appeal, from the 1950 movie of Treasure Island with Robert Newton as Long John Silver all the up through today's favorite, Captain Jack Sparrow. Interestingly, what “Abandoned by Disney” uses as its springboard is a discussion of a Disney property called Treasure Island — but not the one in Florida. This one was allegedly in Baker's Bay in the Bahamas and was meant to be a stop for Disney's cruises; it reportedly cost $30 million to make, but unfortunately, it ended up not being viable in the long term — something about needing to dredge out the sand to make the shallow water around the resort deeper every time the tide brought it back.

So is this one real? I'll be honest: I don't actually know. “Abandoned by Disney” refers to it as fact, as do a number of commenters on various forums online; when I started looking into it, though, I found that most of the information about the alleged Baker's Bay Treasure Island resort seemed to come from one particular article. It's on a site called I-Mockery, which is a humor site — and here's where I started having some trouble: If the bulk of the information I can find on a specific topic goes back to one post that was published on a humor site, that's a huge red flag for me (something about it just screams “HOAX!”). It's also worth noting that Dave Smith, who's the archivist for the official Disney fan club known as the D23 Club, had this to say when someone wrote in asking whether the rumors of a Treasure Island resort in Baker's Bay were true (emphasis mine):

Disney never had a resort named Treasure Island in the Bahamas; our only location there has been Castaway Cay [which is used by the Disney Cruise Line]. Disney's Treasure Island was the former name of Discover Island in Bay Lake at Walt Disney World Resort.

However. I did also dig up an environmental management plan for the Baker's Bay Club written by researchers from the University of Miami in 2007 that seems to mention Treasure Island; there's also mention of the supposed resort here, here, and here, though I don't know how reputable any of those sites are.

So: Do with that all what you will.

I can, however, say with complete certainty that Mowgli's Palace isn't real. That image up top is of the abandoned Coco Palms resort in Hawaii, which is currently being renovated and scheduled to reopen as a Hyatt property in 2017); the second one was taken at an abandoned resort in the Pocanos. If you kind of dig the imagined world in which it takes place, though, Slimebeast has written both a prequel ("A Few Suggestions") and a sequel ("Room Zero"). The prequel is played more for laughs (which doesn't make it bad — just different), but the sequel is definitely good for those of you who like spooky stories — and you wouldn't be reading this if you didn't like spooky stories, right?