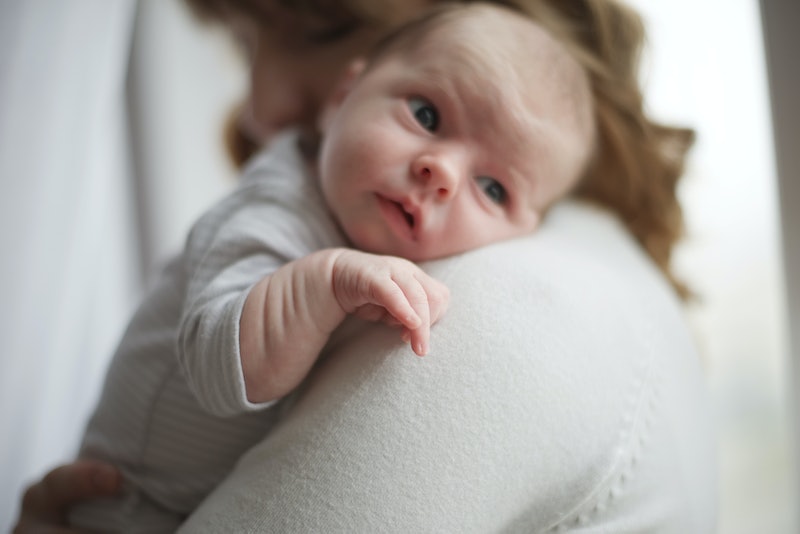 According to a 2013 study, postpartum depression sadly affects nearly 1 in 7 new mothers — and the signs and symptoms often go ignored for far too long. But new research does have one bright spot of news on that front: Scientists now believe that a blood marker can identify a mother's postpartum depression risks. The eye-opening research was published just this week in the journal Frontiers in Genetics, and has study authors hopeful that in the future a simple blood test could predict postpartum depression.

To give you some context, scientists have known for some time that moms with postpartum depression often show lowered levels of the "love hormone" oxytocin, which is crucial for brain health, lowered stress levels, and maternal bonding. (A study earlier this year even underscored this, when researchers analyzed the levels of oxytocin in mice and then studied how the mothers responded to their babies in distress.) But this new research shines a light on just how doctors might be able to head it off in the future, saving millions of moms and moms-to-be each year from devastating depression.

According to Tech Times, lead study author Prof. Jessica Connelly of the University of Virginia worked with research teams from institutions across the U.S. and several teams in the U.K. Together, they examined the cases of 14,541 pregnancies that occurred between April 1991 and December 1992. The authors then compared blood samples taken during weeks 7 and 41 of the mothers' pregnancies to whether or not they were later diagnosed with PPD. In the end, researchers determined that there is in fact a correlation between a mother's chance of developing postpartum depression and the regulation of oxytocin that occurs in the body by the oxytocin receptor gene. And the fact that all of this can be detected in the blood is pretty groundbreaking.

Of course, the study's authors stressed that much more research is still needed at this point and that this is just the first step of many to come. "Our data needs to be replicated," said study author Aleeca Bell, of the University of Illinois at Chicago's College of Nursing, "but it is our hope that the oxytocin receptor marker we have identified will be useful to clinicians in identifying women at risk."

According to the Mayo Clinic, postpartum depression goes way beyond your typical "baby blues" symptoms. Baby blues generally last about one to two weeks postpartum, during which moms feel fatigued, stressed, and have difficulty adjusting to new motherhood. (Which basically just sounds like new motherhood in general, if you ask me.) In contrast, PPD lasts much longer, and has a much longer list of symptoms. In addition to the above warning signs, the Mayo Clinic lists a lack of interest in sex, a loss of joy in life, and withdrawal from friends and family.

Earlier this month, Postpartum Progress teamed up with blogger Jill Krause over at Baby Rabies to raise awareness of the condition, with a powerful video that featured seven powerful stories of moms who've been there. The interviews were honest, raw, and heartbreakingly real. They were also incredibly inspiring. "Once I did get help, I knew I can be the mom that I always wanted to be," said one woman on camera. "I mean, it really was a moment where I felt like, 'I'm kinda me again,'" added another.

Wondering if you or someone you know might be suffering from PPD? Here are some signs to look out for.

1. You feel disconnected from your baby and the world around you.

"One of the truly awful feelings you experience during postpartum depression or anxiety is that sense of disconnection from the world, from your friends and family, from your baby, and most of all, from yourself," writes mom Katherine Stone in an essay on Postpartum Progress. "I felt so deeply, deeply alone."

Those rocky first weeks with YOUR baby aren't always so magical (and definitely aren't perfect), but if you're feeling so alone that you can't truly connect with your baby or your friends and family, it's time to seek help.

2. You have some irrational fears about your baby, or what may happen to him/her.

Of course you'll probably become hyper-aware of your child's safety right after they're born; but someone with PPD might truly obsess over it. This could also be a sign of a related condition, known as postpartum anxiety disorder, which can include symptoms like panic attacks, hyperventilation, excessive worry, restless sleep, and repeated thoughts or images of scary things happening to your baby, according to the UNC School of Medicine.

3. You're constantly worried that you may hurt your baby.

Sadly, moms with PPD don't always just worry that they'll accidentally harm their child — some PPD sufferers experience ongoing negative feelings toward their babies, and actively think about hurting them. According to the U.S. National Library of Medicine, while these thoughts are almost never acted upon, they are nevertheless alarming, and should always be addressed with your doctor. (And not just because you fear you may hurt your baby, but also because in truth, you're hurting.)

4. You're loaded with feelings of guilt and shame.

It's natural to feel like that new baby of yours is totally overwhelming, and that maybe you're not pulling off this whole parenthood thing with the most ease at first. (And that's OK! No one's a pro at this.) But moms with postpartum depression often experience a self-doubt that runs deeper — from feelings of worry to guilt to even shame about the job they're doing. To make matters worse, the Mayo Clinic notes, the self-loathing actually gets in the way of caring for their child.

5. You feel an out-of-control kind of rage — towards inanimate objects, your baby, or really, anyone.

Moms with PPD often find themselves growing irritable at a moment's notice, and the need to act out on it in some way, whether by throwing or yelling. Of course, some of these may stem from a combination of other PPD symptoms — like the lack of sleep, the constant anxiety, and the general feeling of worthlessness. But either way, it's cause for concern.

6. You can't get any sleep. (And I don't just mean your usual new baby sleep deprivation.)

A lack of sleep is pretty much par for the course during those first few months home with your baby. But according to The American Pregnancy Association, PPD involves a much more intense form of sleep deprivation, and brings on a sense of fatigue that doesn't feel normal.

For a full list of more signs to watch out for, you can read Postpartum Progress' postpartum depression symptoms here. The Mayo Clinic also suggests that you speak with your doctor immediately if you're experiencing any or all of the above symptoms — particularly when it comes to self-harm or harming others — or are concerned for someone who is.

If you’re struggling with thoughts of suicide, you can reach the U.S. National Suicide Prevention hotline at 1-800-273-8255. International hotlines can be found here. You are not alone.