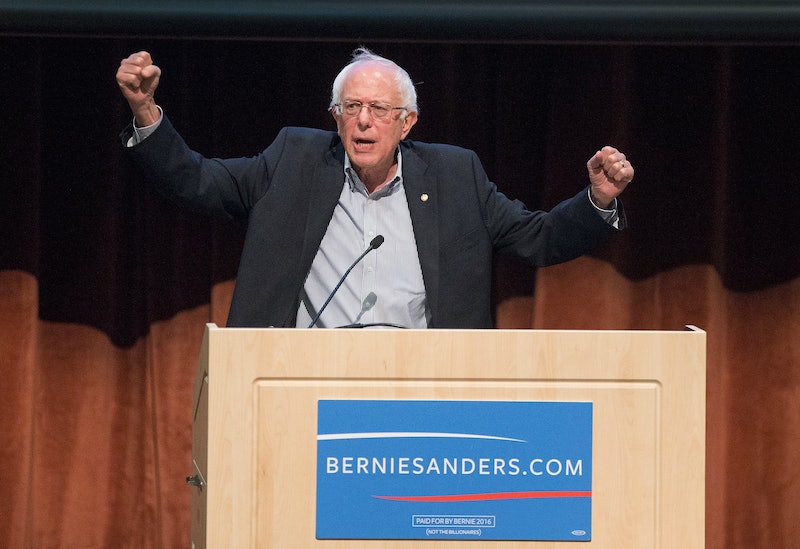 Following the #BlackLivesMatter action at Netroots Nation, some Bernie Sanders supporters tackled structural racism in a nationwide conference call Tuesday evening co-sponsored by the People for Bernie Sanders and People of Color for Bernie Sanders. The Facebook event page stated the conference call would be a safe space meant to amplify marginalized voices, especially those of people of color. Participants in the conference call included Morgan Malone, one of the #BlackLivesMatter activists from the Netroots Nation; Ify Ike, a co-founder of civic engagement organization Black and Brown People Vote; Denise "Lupita" Romero, an immigration rights activist; and Marcus Ferrell, an African American outreach director from Sanders' campaign.

Although Sanders has been trying to find his footing in the #BlackLivesMatter movement, he still has a ways to go when it comes to talking about immigration. In a recent Vox interview with Ezra Klein, Sanders dismissed open borders as a "right-wing myth," much to the chagrin of immigration rights activists like Romero, who posted a critique of Sanders' nationalistic defense of border enforcement on the event page prior to the call. The call itself focused on many different manifestations of structural racism and called on various people of color to get their thoughts.

The event opened with Jackrabbit Furiosa and Stella Hetherington — members of the People for Bernie Sanders team — explaining the format of the call and requesting that white people not chime in until after the first hour. Then, Ferrell, Ike, Romero, and Malone took turns speaking and answering questions from other participants. Here is a breakdown of some of the key issues that were discussed.

Ferrell, who works on Sanders' campaign, said that the #BlackLivesMatter protesters at Netroots Nation were doing what they had to do and that the campaign was going to continue responding accordingly. He also went over a few talking points, explaining that Sanders' campaign goals include an end for for-profit prisons and mass incarceration, a complete overhaul in how police officers are trained, educational and vocational programs for incarcerated individuals, and a restoration of federal voting rights to African Americans who have been disenfranchised. Ferrell added that Sanders "truly believes in what he's saying and he's not just saying it to placate anyone," and wrapped up by telling the other people of color on the call that they "have a brother within the campaign." Ferrell also made a brief call to action, saying that although the campaign doesn't have answers to every possible question about structural racism at the moment, there will soon be tangible work to do.

When Ike got on the call, she explained how important it is for elected officials to show their support for #BlackLivesMatter. However, she also reminded participants that the BLM movement started largely outside the political structure, and that it would continue long after 2016. She urged people to rise up and push candidates to be more explicit about what their visions for equity would look like. Finally, Ike suggested that it would be helpful if Sanders were to outline a 100-day plan for the beginning of his potential presidency, in which he could explicitly set short-term and long-term goals for how to help marginalized communities.

Then, Malone presented yet another perspective — that of somebody who had participated in the Netroots Nation action and was able to explain what occurred behind the scenes. She drew callers' attention to her observation that Netroots ended up largely being an anti-black space, saying that out of 3,000 progressive activists, less than 75 people were black. She also said that out of all of the panels, only three were explicitly dedicated to black issues alone, making it seem as though black people didn't really have a space or presence there. Malone went on to explain Black Roots Nation, the alternative set of programming — during lunch and after hours — that was set up by organizers like Tia Oso to explore the issues that Netroots neglected. "Someone has to hold the candidates accountable on race issues," Malone said of the action.

After she spoke, Malone received a question from another participant on the call about putting a mandate for law enforcement body cameras on official platforms. In response, Malone explained her skepticism — she said that even if body cameras become an official policy, officers can choose whether to turn them on or off, but she also explained that if officers do turn their cameras on and we do find incriminating footage of police brutality, there is no guarantee that there will be repercussions for the officers in question. Malone cited Sandra Bland's case as an example; we have video footage of what took place, but there's no guarantee that the officer will be prosecuted for what occurred.

The question isn't necessarily, "Will body cameras be an effective policy or will that provide enough evidence?" — it's whether or not, even if we have the evidence, "Will they be prosecuted?"

Community policing is a possible solution, though, and Malone answered a question from another caller about what exactly that entails. She said that community policing can either mean communities setting up their own community review boards, or it can mean police officers being part of their communities. The latter specifically refers to the idea that police officers should work in cities or counties that they actually live in, get to know the people who live there, and ultimately build trust with them, because a lack of trust is a reason many people cite for why incidents of police brutality occur. Ike briefly touched on this, too, saying that rather than limiting this discussion to policing, we should be asking how we can create a real sense of safety in our communities.

Then, during her segment, Romero — an undocumented Mexican immigrant rights activist — explained that policing isn't just something we should be talking about in the context of BLM but also in the context of immigration and border enforcement. She said that U.S. Immigration and Customs Enforcement (ICE) collaborates with police departments across the country to fulfill their bed quotas each day, meaning that police departments are allegedly sharing information with and handing people over to ICE, while ICE is allegedly conducting home raids in urban areas like New York City, Chicago, and Los Angeles. Romero added that systemic policing like this reportedly benefits for-profit prison companies.

Romero said she and other immigrants rights activists are critical of Sanders because of his dismissive comments about open borders as well as his decision to run as a Democrat, explaining that Democrats have frequently turned their back on immigrant communities and championed "immigration reform" policy changes that have actually hurt immigrants. She commented on the fact that judges on the Supreme Court as well as around the country have often taken more action than many of the politicians who claim to represent the immigrant rights movement, citing a recent order by a federal judge to end family detention. Because of this, Romero is skeptical of Sanders, and is worried that endorsing him would actually negatively impact immigrant rights. She urged activists to push Sanders to support an end to family detention, an end to ICE's bed quota, and a moratorium on all deportations whether or not he is elected — she said that even if he does not win the presidency, he would still have influence in the Senate to work on these issues. Finally, Romero urged another caller not to get distracted from the issue at hand — the excessive militarization of the border and the policing of immigrants — even if Republicans make a call to "strengthen the border."

Ultimately, this conference call aimed to address structural racism in the context of pertinent issues like police brutality and immigration while urging participants to mobilize outside the political sphere. Sanders has frequently called for a political revolution, which means he likely recognizes that most of the movements that are occupying the spotlight are much bigger than him and always have been. Everyone on the call encouraged participants to push back on candidates by urging them to more explicitly focus on racial justice in their platforms, as well as to continue mobilizing for racial justice whether or not Sanders wins the presidency. Essentially, the call focused more on the current state of emergency and its implications for people of color rather than limiting the conversation to Sanders' campaign.

As for my personal takeaway — I chimed in exactly once, to comment on the invisibility of Asian Americans and other marginalized groups in the political sphere. Something I have long been concerned about is the fact that Sanders talks about voters in three categories — "white," "African American," and "Hispanic" — and he is not the only one. If we are going to push intersectionality during and long after this election season, we should also be careful to acknowledge that "people of color" refers to an extremely large — and certainly not uniform — group of people, and I was glad to see that people on the call were receptive to that sentiment.

What this call proved to me is that people of color across the country are not afraid to be critical of even the most "progressive" candidate, because they know that racial justice needs to be as much a focus of the election season as economic justice, and that this is a state of emergency that we can no longer ignore.