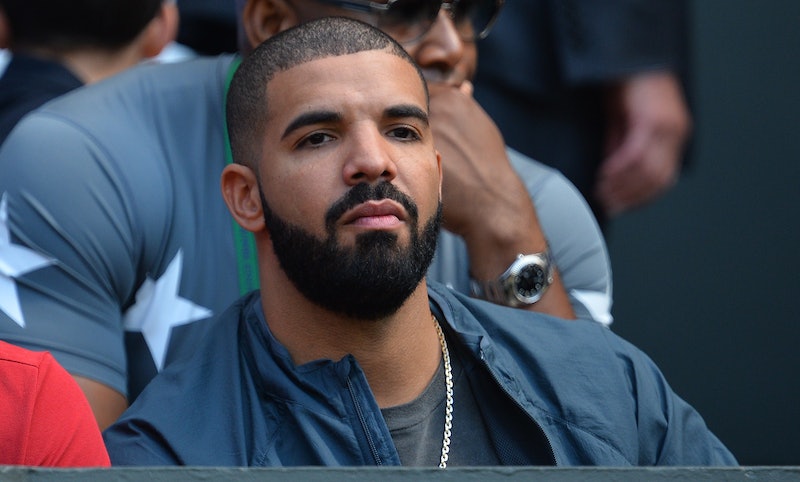 Unless you've been living under a rock — or are into things like "going outdoors" and "spending time with family — you know that we're in the midst of a major feud between Drake and Meek Mill. Last week, Philly-based rapper Meek Mill dissed Drake on Twitter and claimed that Drizzy doesn't write his own raps. THE HORROR! Then, in the time it takes to find the perfect Drake reaction GIF, diss tracks were laid, tweets were exchanged, more rappers got involved, and things have been spiraling ever since. Drake dropped another track, "Back to Back" on Wednesday morning, which shows that this fight is far from over.

So, why are Canada's favorite son and Meek Mill fighting? The likely case is that Meek Mill was feeling a little butthurt over the fact that Drake didn't promote his new album. Drake appears on the track "R.I.C.O." on Meek's recently released Dreams Worth More Than Money. Meek posted the tweet that started it all on July 22 which reads, “Stop comparing drake to me too…. He don’t write his own raps! That’s why he ain’t tweet my album because we found out!” (For the record, the song is still included on the album's track list.)

Meanwhile Nicki Minaj, who is a collaborator and friend of Drake and happens to be dating Meek, has been too busy selling out concerts and slaying the hip hop game. Let the boys fight Nicki, you just keep doing you.

Drake, being a pro at feuds (there is an actual Wikipedia page dedicated to Drake's feuds), has fired back with TWO diss tracks while the world still waits for Meek Mill to drop his. In case you're having a hard time following MeekGate 2015, here's a helpful timeline of events:

He was busy being Canadian.

Meanwhile, Nicki Is Busy Making a Statement About Race & Feminism

You know, stuff people should actually be angry about...

Even though he's professed his adoration for Drake in the past.

Can't be mad at that. He seemed pretty calm about the whole thing.

Meek Mill Apologizes To Nicki For His Twitter Rant

He seemed ready to put the whole thing to bed, saying while making an appearance on Nicki's Pinkprint tour, “I want to give like, a special apology shout-out to Nicki Minaj for my crazy ass going crazy on Twitter... Don’t get it twisted, I was just upset as a fan that Drake gave me a verse that he didn’t write. Shout-out to Drake, let him be great in all the motherf*king lanes that he’s great in.” So we can lay this to rest, right...?

Drake Responds To Meek's Accusations With "Charged Up"

Drake slams, “Done doing favors for people/ ‘Cause it ain’t like I need the money I make off a feature." This makes it clear this whole thing is really over their collaboration on "R.I.C.O." Drake also called out the fact that Meek Mill's girlfriend was a greater and more successful rapper than him — which OK DRAKE, that's actually a dig against Nicki — she is one of the strongest rappers in the game and calling out her gender as a diss against Meek Mill is like bullying the kid in gym class who was beat by a girl in a race.

Meek posted these tweets soon after the release of "Charged Up," so it's pretty clear what he was going for. Ouch!

The Hot 97 DJ made a big to-do about Mill's rebuttal and aired a version of "10 Bands" performed by the rapper Quentin Miller, who he he claimed wroke Drake's lyrics.

The Track Never Comes & Twitter Has A Field Day

Funkmaster Flex really had it handed to him. At least he took it in stride by re-tweeting a lot of the memes.

Drake Drops "Back To Back" Freestyle

"Back to Freestyle" really tears into Meek Mill. The art for the track is a picture of the 1993 World Series win of the Toronto Blue Jays over the Philadelphia Phillies. Drake slams Meek for being lesser-than his girlfriend again, "You love her, then you gotta give the world to her/ Is that a world tour or your girl's tour?/ I know that you gotta be a thug for her/ This ain't what she meant when she told you to open up more." Again Drizzy, why must you use Nicki as ammo? Her being successful does not make Meek Mill less of a rapper — it might just make him a coat-tail rider.

The moral of the story here is that Drake is as good at feuds as he is at rapping. While the fellas keep bickering, Nicki Minaj will just keep ruling the rap game. And that's a happy ending, if you ask me.