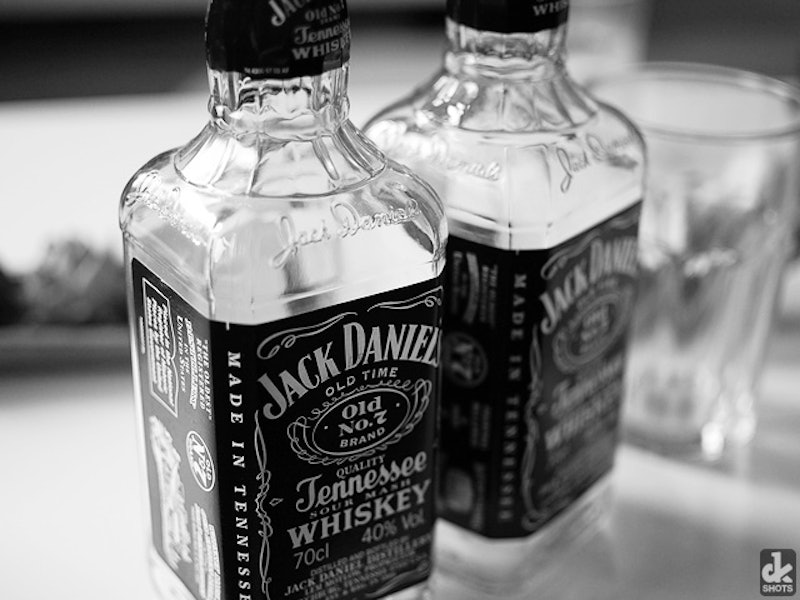 The only thing better than a fun map is a fun map that involves booze, so here — let's take a look at this nifty visualization of the most popular hard liquor in each state. Because who isn't curious about our boozing habits across the country? I know I sure am!

Business Insider teamed up with the social app Bartendr to figure it all out. Using data gathered from Bartendr's 700,000 users (side note: why do all apps with names that should end in “-er” inexplicably drop the “e?” Seriously, guys — I just don't get it), they did a little number-crunching based on those users' posts and photos; the results calculated the most commonly-referenced brand of hard liquor in each state. Fun fact: Apparently Americans are huge whiskey fans. A whopping 42 states prefer some type of whiskey, with Jack Daniels being the most popular by far; comparatively fewer prefer vodka, rum, or tequila, and gin is nowhere to be found.

Is the method flawed? A little; Bartendr's users' tastes may not necessarily reflect those of each state at large, and I would argue that posting a lot about something doesn't necessarily mean you drink a lot of it. But it's still kind of interesting to see which states dig which types of booze; I find it notable, for example, that tequila took the top slot only in places that don't exactly make you think of warm weather and margaritas.

So, counting down from the most popular liquor nationwide to the… well, not exactly least popular — it's more like the least popular of the most popular — liquor, here's what each state prefers to drink when it comes to the hard stuff. Note, though, that after item number three, the list is more or less arbitrary in order; there were a lot of ties, and a number of states even ended up with multiple favorites. Idaho and Iowa in particular seem to have diverse tastes; they both clocked in with not one, not two, but three favorites — Fireball, Captain Morgan, and Jagermeister for Idaho, and Patron, Jagermeister, and Crown Royal for Iowa.

Anyhoo, here are the United States' top picks for hard liquor — head on over to Business Insider to see them all laid out on that handy-dandy map I was telling you about.

According to Bartendr and Business Insider's calculations, Jack Daniels is the most popular liquor in a whopping 14 states, including such diverse places as California, Texas, and Vermont. It's a good thing that whiskey shortage we started hearing about last year might not come to pass after all, isn't it?

Coming in a close second is the cinnamon-flavored beverage known as Fireball, taking the top slot for 13 different states ranging from Maine to New Mexico. Honestly, I had no idea this stuff was that popular.

And here's where we start seeing some sharp drops: Crown Royal (which, admittedly, I hadn't heard of until today) is the favorite of just six states: Delaware, Iowa, Kentucky, Louisiana, Nevada, and Oklahoma.

Patron, meanwhile, seems to be a favorite mostly in places not known for their tequila selection — Connecticut, Iowa (along with Crown Royal and Jagermeister), and Washington State. Speaking of Jager...

The licorice-flavored liquor is a favorite in Idaho, Iowa, and Kentucky. Notably, these three states also claim more than one type of booze as their favorite.

Beginning our series of twofers is Evan Williams, which takes the top slot for Illinois and Arizona. Not going to lie: I had to look this one up. It's a brand of bourbon, for those also not in the know.

Twofer number two is Captain Morgan, beloved by Idaho and Wisconsin natives. Also, yes, that is the obligatory Captain Jack Sparrow rum GIF. I'm sorry, but it had to be done.

Hennessy appears mostly to be a Northeast phenomenon; New York and Massachusetts apparently adore the stuff.

And coming in at one state apiece, we have Bacardi (Colorado), Grey Goose (Virginia), Jose Cuervo (Oregon), Jim Beam (Mississippi), George Dickel (South Carolina — it's a type of whiskey), and Svedka (Maryland, along with Fireball). You win some, you lose some.