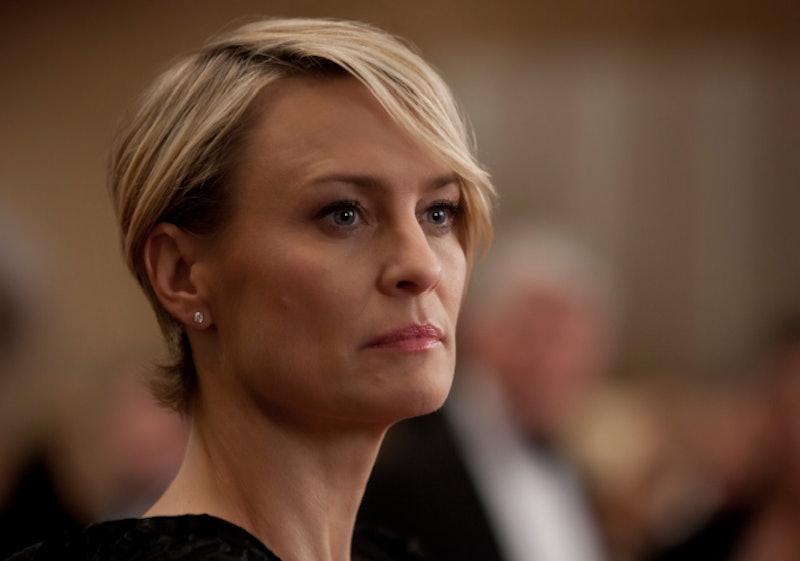 The new year's bringing us a whole lot to look forward to this year: We've got the much-anticipated third season of Sherlock, the premiere of Girls, and now, we've got a House Of Cards premiere date and teaser and, come February, the show itself.

Netflix released the first teaser for House Of Cards Season 2 early Wednesday. It features Robin Wright's Claire Underwood, in black and white, sitting in noir-ish lighting and dragging off a cigarette. It's silent and simple, but these teases are all about the tone, and that they've nailed.

The first season of the show was widely critically acclaimed, as well as snatching Netflix some big Emmy nominations, including Outstanding Drama Series, Outstanding Directing for a Drama Series for David Fincher, and actor nominations for Kevin Spacey and Robin Wright. Netflix' executives have expressed in the past that they'd like to keep the show running past the second season, too: “Our intent is that the show keep going for sure,” Netflix Content Acquisition Head Ted Sarandos told Deadline back in October. “It was a 26-episode commitment. It was not our intent that it just run for two seasons,”

The second season's now officially set to be released on Netflix come Feb. 14, 2014, AKA Valentine's Day.

More like this
The First Trailer For 'That '90s Show' Includes So Many Nods To The Original Series
By Jack Irvin, Alyssa Lapid and Grace Wehniainen
The ‘Emily In Paris’ Season 3 Trailer Teases Major Career & Love Crossroads For Emily
By Bustle Staff
Elizabeth Debicki On Her Approach To The Most Debated Scene From 'The Crown'
By Grace Wehniainen
Evan Peters Decompressed After 'Dahmer' By Watching This Will Ferrell Movie
By Grace Wehniainen
Get Even More From Bustle — Sign Up For The Newsletter