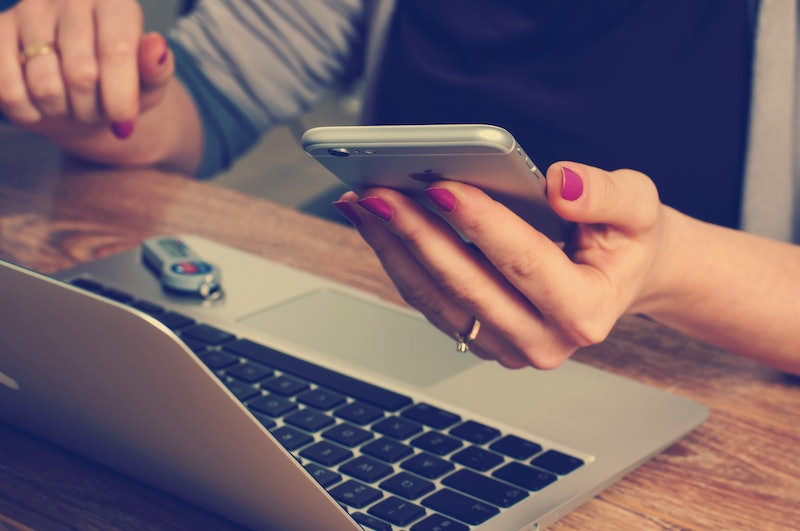 Although according to U.S. Rates and Statistics, the divorce rate has been on the decline since 1980, the fact remains that there are people out there still getting divorced. While it may not be as high as the 50 percent rate that has long become the go-to stat, no marriage is perfect which means no marriage is safe from divorce. While experts try to predict what leads to divorce as means to lessen the amount of them, in the past few years there's been a new factor: social media is a reason why people get divorced.

You may think that your little flirtations with your crush from high school are NBD, but the truth is that some partners don’t like that behavior. Whether you’re in a long-term relationship or married, Facebook, and the Internet in general, can be sources of temptation and drama. According to family law firm McKinley Irvin’s new infographic, with one in three marriages ending because of an online affair, Facebook and Match.com are playing big rolls in the reason people divorce. And the problem with Facebook is that the evidence is all right there ― unless you’re smart enough to delete your tracks, of course.

From jealousy to creeping in on their partner’s social media accounts to divorce because of online behavior, here are seven ways social media is ruining your relationship.

1. More Than 10 Percent Of People Say Facebook Is A Source Of Jealousy And Danger

According to 15 percent of people, social media is absolutely dangerous to their marriage, while 16 percent can point their fingers to Facebook as causing jealousy in their relationship. The threat is so real that 14 percent of adults admit to combing through their partner’s social media accounts looking for evidence of cheating, virtual or otherwise.

As the McKinley Irvin study found, it’s not just what a partner does on social media (liking every photo of their ex, maybe?), but the amount of time they spend on it. When it comes to the biggest arguments in couples about social media, the complaint is always how much time a partner wastes on it.

3. A Third Of People Keep Their Social Media Passwords From Their Partners

While marriage is supposed to be about everything, for a third of social media users, keeping their passwords private from the prying eyes of their partners is a must. The study also found that one in 10 of adults admit to hiding certain posts or message from their partners on Facebook.

For those who are just tired of hiding their behavior on social media from their partner, getting really sneaky is the best way to go. It’s that group, eight percent of adults, who just have a secret social media account all together. At least that way they can’t feel bad about hiding posts or changing their password every other day to really make sure their partner is clueless, right?

Whether it’s because of Facebook usage or a partner’s behavior on it, for 25 percent of couples Facebook causes a fight at least once a week. People are fighting about it so often, that Facebook leads to confrontation in one in seven married couples, forcing the discussion of divorce to come up.

6. A Fifth Of People Doubt Their Relationship Because Of What They’ve Found On Facebook

According to the study, one in five people have found something on Facebook regarding their partner that has made them feel “uneasy” in their relationship. But despite that less than half of spouses confront their spouses about their discovery.

7. Majority Of Lawyers Use Social Media Evidence In Divorce Cases

As McKinley Irvin points out, what a partner “shares” on online can also be shared in a courtroom during a divorce case. In fact, 81 percent of the American Academy of Matrimonial Lawyers have used social media as evidence in cases, with the top three being state of mind while being on social media, communications on it, and the time and place of said events.