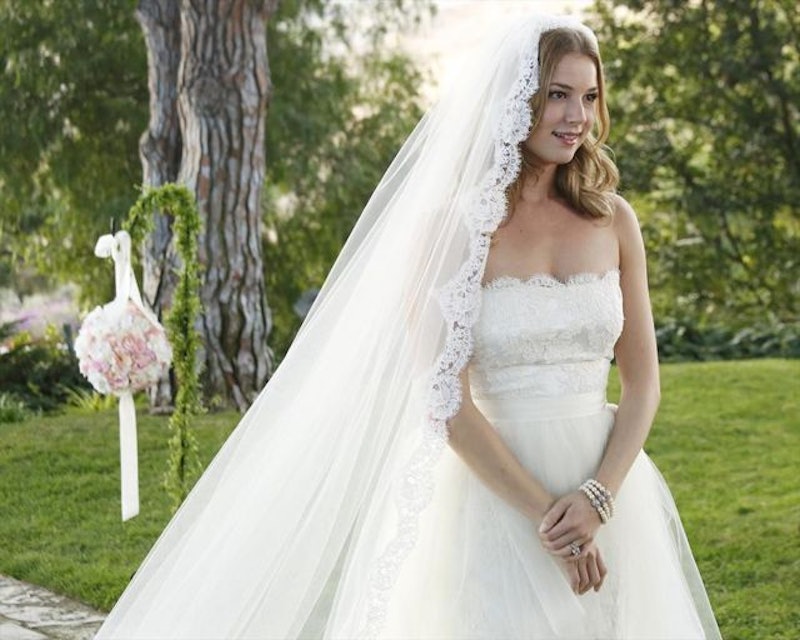 Over the course of three seasons of Revenge, we've watched Emily Thorne attempt to take down the Grayson family and avenge her father's wrongful imprisonment and death. But this season marks Emily's boldest plan for vengeance yet: frame Victoria Grayson for Emily's very own murder. That means that, once again, Emily must play the role of dutiful fiancee to Victoria's son Daniel in an effort to stay in the Grayson's sphere. The more people think that Victoria loathes her future daughter-in-law, the more likely Victoria will be considered a suspect for Emily's murder.

For the first two seasons of Revenge, I was totally Team Emily. It's not hard to hate Victoria and Conrad Grayson, the two people who helped fund a terrorist attack and then blamed an innocent man in order to cover their own tracks. Watching Emily shake up their perfect lives was exciting because, at the end of the day, these people really do deserve every carefully laid out plan of attack that Emily has unleashed on them. Emily's plans have always justified the means.

Has her plan for vengeance caused collateral damage? Absolutely. In her quest to make the people who hurt her family pay, Emily has indirectly hurt the people she has cared about most, including her own half-sister, Charlotte. Hell, her former juvie friend "Amanda Clarke" was basically the embodiment of collateral damage... may she rest in peace.

Then, of course, there is Daniel Grayson, the man that Emily must pretend to love in order to set her revenge plans into motion. Emily let Daniel go at the end of the first season — perhaps realizing that just because someone is rich and very attractive does not mean that they do not have any feelings — but swept him back up in the third season when he became critical to her latest endeavor.

Daniel Grayson isn't a perfect person, but he's certainly far more noble than any of his family members. A redeemed "party boy", watching him fall for Emily in the first season was sweet — despite knowing that, on Emily's part, it was all an act. In the third season, the newly reunited couple is busy planning their wedding — but, of course, Emily's heart isn't in it.

So here's where things are getting murky on Revenge. At the beginning of the series, Emily learned that Daniel had been the cause of a car accident which severely hurt the passenger in the car — Daniel's then-girlfriend, Sarah. Now, Sarah is back in the Hamptons, and has finally forgiven a the newly-sober Daniel for his past. And in true Revenge fashion, the sparks between these two star-crossed lovers are flying — enough to make Daniel realize that it's not Emily that he wants to be with at all.

After learning of Daniel's indiscretions with Sarah, Emily did the thing that soap operas have been pulling for years: She announced that she was pregnant with his baby. (What a way to keep a man, right ladies?)

I know that we're supposed to think that the ends justify the means when it comes to Emily's quest for vengeance, but I can't help but question the integrity of this particular twist. Daniel may not be completely innocent, but his new love interest, Sarah, is. She might even be the first truly good person to ever appear on Revenge. Are we really supposed to believe that destroying her happiness — not to mention trapping a guy into a loveless marriage — is worth it?

It's certainly not the worst thing that Emily has done on the show, but it is the first time I've really questioned Emily's plans. Destroying innocent people for ones own selfish interests? That seems like something that Emily's mortal enemy, Victoria Grayson, would do on the daily. In the last episode of Revenge, Daniel tells Sarah that he doesn't want to marry someone like his mother — and, if he marries Emily, it looks like he just might be doing that.

More like this
Don't Expect To See Your Fave Modern Royals Depicted On 'The Crown' Season 6
By Jack Irvin
James Marsden Kept Teddy’s Westworld Season 4 Return A Secret “For Years”
By Brad Witter
At 14, Kate Berlant Had A Wheelie Backpack & One Line In 'Lizzie McGuire'
By Samantha Rollins
What’s New On Netflix: 'Stranger Things' & 'Mean Girls'
By Arya Roshanian
Get Even More From Bustle — Sign Up For The Newsletter