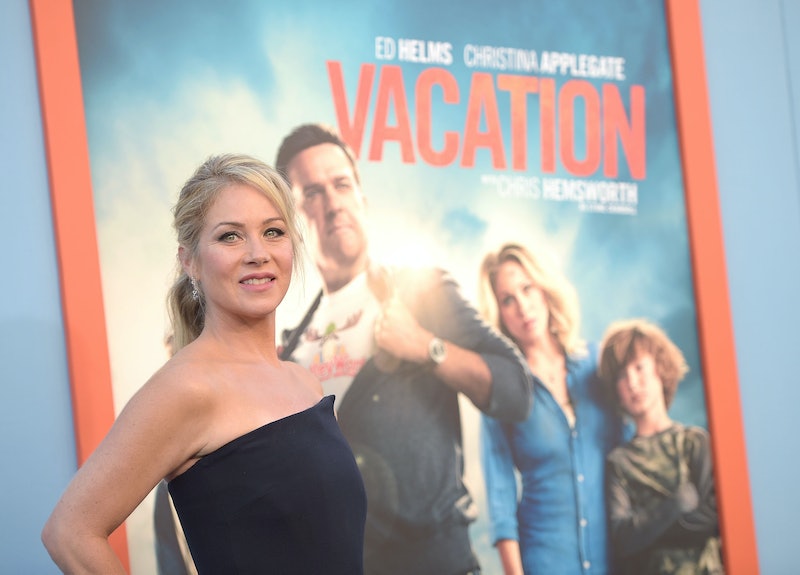 Christina Applegate is no stranger to appearing in male-centric films. Her role in the Anchorman franchise was literally fighting to appear on television along side the boys, and in her latest picture, Vacation , Christina Applegate is surrounded by an on-screen family of entirely males. "It happens for women quite often that we play the straight man," the actress says. "I've done it for many, many, many moons."

In the Vacation reboot, co-starring Ed Helms, Applegate plays Debbie, wife to grown-up Rusty Griswold and mother of two boys. She is struggling to hold on to her identity in these roles, and misses the spice of life she had before her married days. "I love being on a set and I love acting, but I also need my character to have a life," Applegate says, noting that the character of Debbie was very different before she signed on to the film.

According to the 43-year-old mom, she met with writer/directors John Francis Daley and Jonathan M. Goldstein to talk about fleshing out her character. "We had a pow wow and I sat down and I said, 'I really need Debbie to have a life. I need her to have a skeleton because we all have them.'"

And the Debbie Griswold we see on screen certainly has her own backstory and plot points. "When the big thing that happens, happens," Applegate begins, being coy about a spoiler-y plot point, "it wasn't in the original script. A lot of it wasn't. I wanted Debbie to surprise the audience with her being game for things that are not the norm."

The seasoned actress reveals that much of Debbie's character was crafted in improvised scenes with on-screen hubby Ed Helms. The pair would see what worked and what didn't work, and what seemed believable and real for Debbie. "It was collaborative, to get Debbie to where she ended up being. The modern mom doesn't come from Pollyannaville," the blonde beauty says. "We were kids of the '70s, '80s, and '90s. We've been exposed to great deals of things, and most of the moms I know have had a past, and they're great parents. They're great parents because they've had a past," she explains.