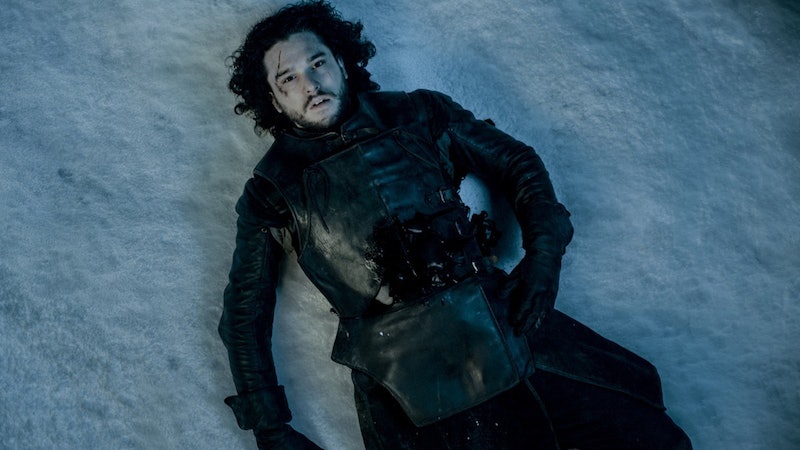 Is there really anyone out there who still believes that Jon Snow was killed off of Game of Thrones ? Because between all of the speculation and endless theories (which now seem to sprout up on a daily basis), I'm more convinced than ever before that our Lord Commander of the Night's Watch is alive and well. For starters, there's the fact that Kit Harington is still rocking the long and curly Jon Snow hairdo. (The actor has stated that he would cut it once he was no longer on the show.) So either he's grown rather fond of those luscious locks or he's not as done with the role as we may have thought. And don't even get me started on HBO's recent slip-up hinting at Jon Snow's return.

Basically, the evidence stacked in favor of this character's continued survival is pretty much unlimited at this point, and yet GoT continues to insist that our beloved bastard is no more. Why? Because they don't want us to know the truth. They want to keep us talking and interested in what will happen next. But they aren't the first series to pull such a cruel trick on its viewers. In fact, this is a relatively common practice throughout the industry. So just in case you're still a little uncertain of Jon Snow's fate, here are six other shows that lied about a character's death only to have them return later on. For the night is dark and full of liars — not to mention potential spoilers for those who aren't all caught up on shows.

It wasn't all that long ago when viewers watched in horror as Olivia's former beau was brutally stabbed multiple times by her current beau, Russell. And while fans were unclear at the time as to whether or not the attack would be fatal, Scott Foley himself took to Twitter shortly afterward and basically seemed to confirm his departure from the series. "So, there it is. Thank you Twitter for tonight and all of the Thursday nights. It's such an honor. #Scandal" Of course, we now know that Jake ended up surviving his wounds after all, despite the actor's apparent farewell message. Perhaps Harington decided to take a page out of Foley's handbook of misdirection?

Leave it to PLL to actually show us a clearly dead body and somehow still be able to make said character eventually come back to us alive and well. But before Mona made her shocking return (in non-flashback form), Janel Parrish had been referring to her character as "dead" the whole time, even telling The Hollywood Reporter in an interview that she "parted with 'alive Mona.'." Sounds like someone else I know — or should I say… Snow. Though, when you're dealing with a show called Pretty Little Liars, I guess the truth is never really a first priority.

OK, so in all fairness, I don't think too many people really thought Oliver actually died in last year's midseason finale. (The show is named after his character, after all.) But when someone falls off a snowy cliff with a huge sword wound in their chest, you can't help but feel a little concerned about where things are headed. Plus, it didn't help that Stephen Amell later posted a message to fans on Facebook, which seemed to hint that Oliver wouldn't necessarily return: "Despite the title, our show is bigger than any one character. We're going to prove that to you. Sit tight... January will be here in no time." Thankfully, that turned out to not be the case, but that didn't stop the series from leaving this vigilante's fate hanging in the balance throughout the entire holiday season. Now that's what I call cruel.

After watching the Grayson matriarch allegedly meet her demise in a blaze of glory, Madeleine Stowe coyly assured multiple outlets that her character would return, but only in flashback form for the rest of the season. But we should've known those Graysons are professional liars. A very-much alive Victoria returned for a final showdown with Emily in the series finale, only to be killed off yet again (but for real this time) in the final few moments of the show. Anyone else just experience a serious case of whiplash?

Jeremy On The Vampire Diaries

Hey, remember how Jeremy's died like, I don't know, a BILLION times?!?! Each time seemed to be pretty legit, but each time magic was able to somehow bring him back. You think we would've learned our lesson at some point. Those biceps simply cannot be killed.

Viewers freaked out in the final few moments of the Season 3 finale when it was teased (via a mysterious video message) that Sherlock's greatest nemesis may not be as dead as we originally thought. Granted, this could just be a Moriarty copycat or avid supporter using trickery that they know would get Sherlock's attention. But if it's not and Moriarty did somehow manage to survive, then this is officially the sleuth-iest lie in all of television history. Of course, Steven Moffat has since assured fans that Moriarty "was definitely dead," given that a gunshot to the head would be pretty impossible to fake. But then again, couldn't we say the same thing about Sherlock's iconic fall in Season 2? Just saying! Consider yourself on notice, Moffat.

These shows clearly had no problem with pulling the wool under our eyes. What's to say Game of Thrones doesn't plan on doing the same sort of thing? Sorry, HBO, but unlike Jon Snow, we know way more than you give us credit for.