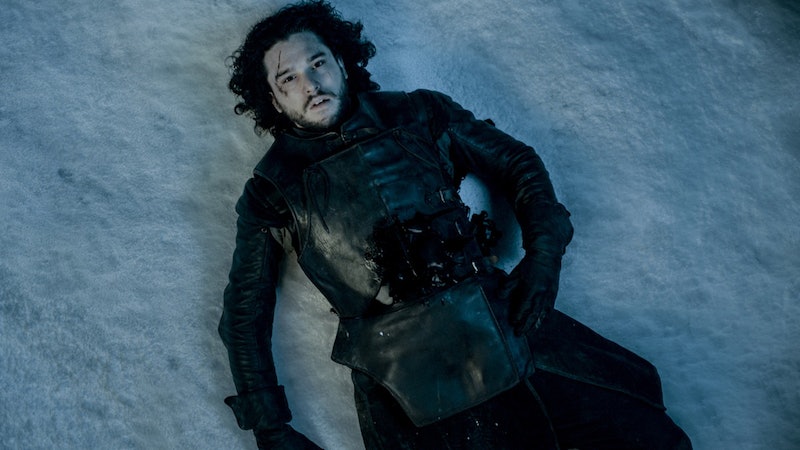 It's absolutely no secret that Jon Snow's alleged Game of Thrones death was a huge shock to us all. Has his watch actually ended? Would the writers really do that us? In fact, fan outrage has become so fierce that Jon Snow GoT theories have continued to spread like dragon fire well after the Season 5 finale. And Kit Harington's suspiciously long hair is doing nothing to squash our belief that this beloved bastard is still alive and well. (OK, so, maybe not "well." He did just get stabbed multiple times, so he might need to lie down for a bit or something.) The point is, though, that while Jon Snow may know nothing, we as viewers are informed enough to realize that there's more to this whole ordeal than meets the eye. There has to be.

That being said, there are some people out there (you know who you are), who are better at handling their grief than others. Because, let's be honest here — we all know that this is just a TV show, but that doesn't make coping with a character's death any less painful, no matter how many resurrection possibilities there are out there. We've grown to love Jon Snow throughout the years, so losing him can feel a tad devastating at times. (OK, more like all the time.) So where do you fall on the grieving scale? Here are a few tried and true signs that you may be taking Jon Snow's death a little too seriously. Please seek out the nearest maester immediately.

1. You're Growing Your Hair Out In Honor Of His Luscious Locks

It's a noble attempt, but I'm afraid nothing can come close to the real deal, my friend.

With white fur, of course. Something tells me this is not going to end well.

That's basically like living at The Wall, right? (Wrong.)

4. You Incorporate The Phrase "You Know Nothing" Into Your Daily Life

And have probably lost many friends because of it. (Knowing nothing is only adorable when it involves Jon Snow.)

6. You Have Kit Harington Google Alerts Set Up On Your Phone

That way you can track his every move and discover more clues regarding his character's fate. (It's not stalking if Google is involved, right?)

7. You Can't Look At Snow Without Bursting Into Tears

Or even talk to anybody with the name Jon (whether it's spelled with an "h" or not). It's all just too painful for you to deal with right now.

8. You Find Yourself Dreaming About Jon Snow

Just kidding. This one is totally normal. Proceed.