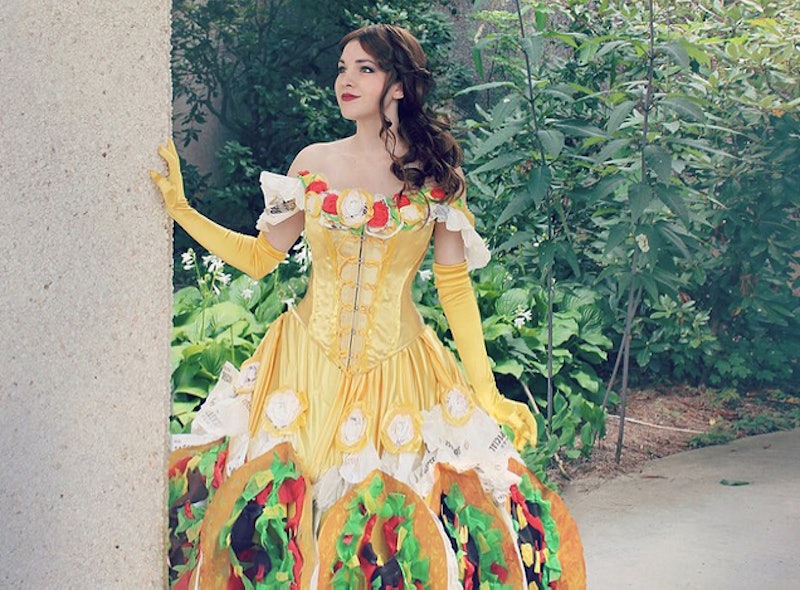 If I were going to create my own religion, it would basically be junk food and Disney princesses all day erry day — which is exactly why I can't get enough of this Taco Belle dress cosplay. Olivia Mears, a cosplay extraordinaire who chronicles her adventures on the Instagram @avantgeek and Facebook, took the Taco Belle pun that has been frequenting the internet and brought it to LIFE. The literal only thing on this planet more chic than Belle's dress is this new version, complete with handmade, intricate fabric TACOS that just made every geeky pun lover's dream come true.

What makes this story even more delicious is the fact that Mears is no stranger to internet pun fame. "My inspiration for the dress was when I dressed a [normal] Belle after a photoshoot and decided to eat at Taco Bell while in costume," Mears shared with Bustle. "Someone snapped a picture of me and posted it to Reddit and it went viral."

That was three years ago, so she was already our hero back then. Here's the picture that somebody snapped of her dressed up as Belle at a Taco Bell, if you think you can handle the pun-tastic nature of it:

The photo attracted so much internet love that Taco Belle ended up featuring her in a commercial earlier this year. They literally just gave her somewhere between three and five hundred Taco Bell wrappers, at which point she got to work and created a whole freaking DRESS out of them, which was then featured on the local news:

Here is the dress as featured in the commercial:

Because we are all so #blessed, Mears then got to work on the Taco Belle dress that has already gone mad viral on Tumblr. BRACE YOURSELVES, my fellow Disney-holics, for the most glorious sight your eyes will ever behold:

CANCEL HALLOWEEN, guys. Nobody is ever going to be able to top this. Soak in the glory, cuz the rest of us are DONE.

"It's definitely one of my silliest costumes so far, though not by some standards: most of this dress is fabric, cardstock, tissue paper, and felt," shared Meers, "but some of my more popular costumes include wedding dresses made entirely from toilet paper and glue, and armor sets made from PBR cans."

The Belle dress above took a whopping 30 hours to create, and in true Princess Belle fashion, Mears said that she "hates being bored" and devotes all of her free time to creating her costumes. And it's no wonder she has mastered the craft — she has been working on these fantastical costumes since the age of 11, when she fashioned a green pillowcase into a Link costume.

Her favorite so far? This SICK Charizard costume:

"I've been calling it the Poke'Monster Hunter version since it's more body-armor than an actual creature. The wings flap when I move my arms. I've been kind of obsessed with adding wings to all of my costumes lately, but I think this one is the best so far," said Mears.

You'll also recognize a bunch of your other faves on her Instagram, including:

This needs to be a wedding dress in a Batman-themed wedding YESTERDAY.

A LITERAL SUIT OF ARMOR MADE OF PBR CANS

THIS IS TOO COOL FOR YOUR EYES. WE ALL NEED TO TAKE A BREATH.