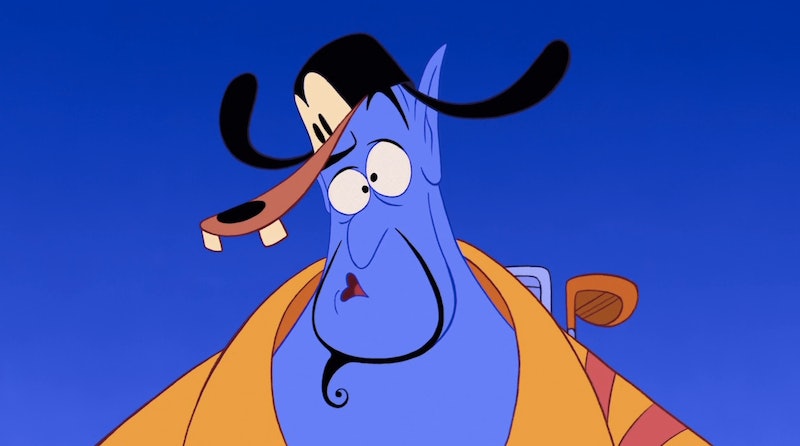 I'm going to go ahead and say it — Aladdin is the best Disney movie all time. Yes, it's even better than modern ones like Frozen and even the new masterpiece that is Inside Out. Aladdin is a brilliant film because of the quality of its comedy, and it is all thanks to Robin Williams' performance as the Genie. Williams, the late legend, used his strengths as a standup comedian to breathe life into the animated character, and never before had there been one on screen who felt so alive. While the base of the character is Williams' regular speaking voice, half of the time he goes into hilarious voices like a Yiddish accent, telling Aladdin “You little punim, there." Williams brought out all his pitch-perfect impressions, including Jack Nicholson, and the animators picked up on Williams' talents and drew the Genie as those respective characters.

While many of the jokes are timeless, some of them are just sooooo outdated that they don't resonate as much with audiences today. Whether the cultural relevance of the particular reference point has dulled, or we just have no idea who the person is anymore, here are the Genie's moments from Aladdin that lead you to Google.

Sure, we still know who Arnold Schwarzenegger is today, but we know him as the Governator of California. He was at the height of his fame in 1992, having starred in many movies in the late '80s including Terminator and Twins. The Schwarzenegger joke played a lot better then than it does now.

When the Genie is awakened by Aladdin, he goes full De Niro and does the "You talkin' to me?" speech from Taxi Driver.

Dangerfield was a comedian most famous in the late '60s, but '60s nostalgia was big in the '90s like '90s nostalgia is big in the 2010s. The animators draw Genie to look almost exactly like him and naturally, Robin WIlliams' vocal impression is uncanny.

The Genie is drawn to be like Buckley twice in the movie. William F. Buckley hosted the TV show Firing Line from 1966-1999. Genie turns into him when he needs to get serious with Aladdin. I'm sure that joke killed with the parents in 1992, but today it takes some Googling to get.

Hall was huge in the '90s — he was a comedian with a talk show from 1989-1994, and Aladdin falls smack in the middle of its run. While Genie he does Arsenio Hall's classic chant while working to turn Aladdin into Prince Ali. This is as '90s as it gets without anyone wearing any scrunchies.

Kids these days, and in those days, do not recognize this reference to Peter Lorre, an actor who was known for playing the evil sidekick in many film noirs. But while most of the references were intended to entertain the adults who were sitting through the film with their children, when we watch this with our kids, we won't be able to point this one out like we can do with Genie's Schwarzenegger or DeNiro.

Check out this video of many of Genie's transformations, and see which ones you can recognize, or which ones did not survive past the '90s.