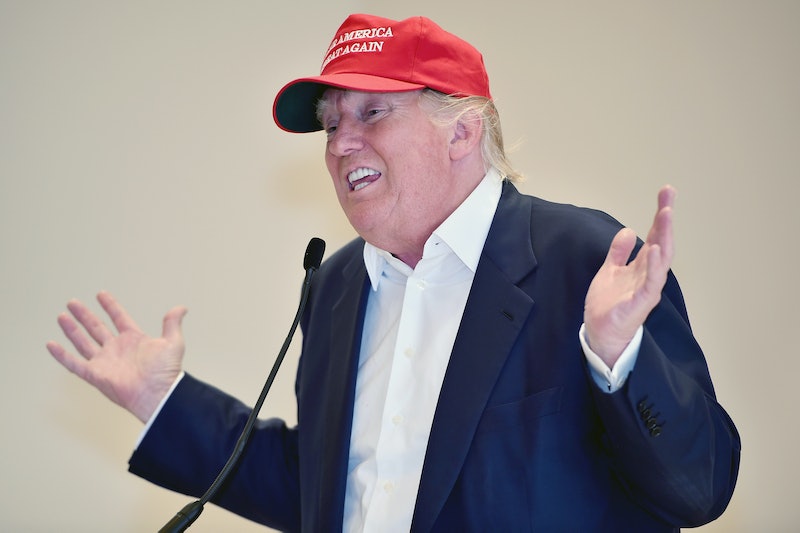 Earlier this year, Donald Trump actually tried to trademark the words "Trumpocrat" and "Trumpublican" when he first began preparations for his presidential campaign, according to The Washington Post. Apparently, his campaign thought they could put the words on "salt and pepper shakers; posters; shirts; ties; cufflinks; colognes; chocolate; nameplates; key rings; eye wear; playing cards; surfboards; editions of automobiles" and more, according to the application presented to the Patent and Trademark Office. The trademarks are now listed as abandoned, but it's still hilarious that they could've been a thing.

The Post also said that Trump told an interviewer that he trademarked "Make America Great Again." That isn't searchable in the PTO's database, but it is plastered across Trump's new line of campaign hats. Trumpocrat and Trumpublican aren't the only words Trump has tried to patent. In 2004, he tried to trademark "You're Fired!" - the phrase he often used on The Apprentice, according to USA Today. Unfortunately, the PTO denied the patent - not because Trump didn't own the creative rights to it, but because they thought it sounded too close to an educational board gamed called "You're Hired," according to Business Insider.

Fortunately (for our entertainment), Trump isn't the only celebrity or politician to try to trademark something absurd. The PTO has been hit with a lot of strange trademark requests from politicians and celebrities, some of which it has denied and some that it has shockingly approved.

Polizzi, from the reality TV show Jersey Shore, wanted to trademark her nickname on the show: "Snooki." Just when you thought she was the only Snooki in the world, the PTO denied her application because they thought people would confuse her with "Snooky," the cat star of a children's book that has a patent on its name, according to Business Insider.

Palin tried to trademark her name in 2011, but the PTO turned down the application, which her lawyer submitted, because Palin forgot to sign her own name, according to Reuters. So she couldn't trademark her name because she forgot to put her name on her paper. Come on, Palin. This is, like, Kindergarten stuff.

Paris Hilton Trademarked "That's Hot" And Won A Lawsuit Over It

In 2007, Hilton sued Hallmark for using the phrase and her likeness on a card. She won because the PTO said she owned the trademark, according to Business Insider. Oh, the early 2000s, how I sometimes miss you ... but not really.

This is where I start to lose faith in the PTO. The Olympic swimmer successfully filed a trademark application in August 2012, according to Business Insider, so that he could put it on swim goggles, sunglasses, jewelry, and socks. Sorry, wait, jewelry? Like, a necklace with the phrase "Jeah" hanging on it?

I mean, this is the guy who, in his TV show, said he wanted shoes that had his name written on the bottoms — "Ryan" on one foot and "Lochte" on the other. And he told the E! Online that he wanted to start his own fashion company, and this is how he described it:

Why? Because they're Beyoncé and Jay-Z. "Blue Ivy Carter" was trademarked with the PTO in November 2012. The couple sent the application just a few days after Blue Ivy's birth, according to Business Insider.