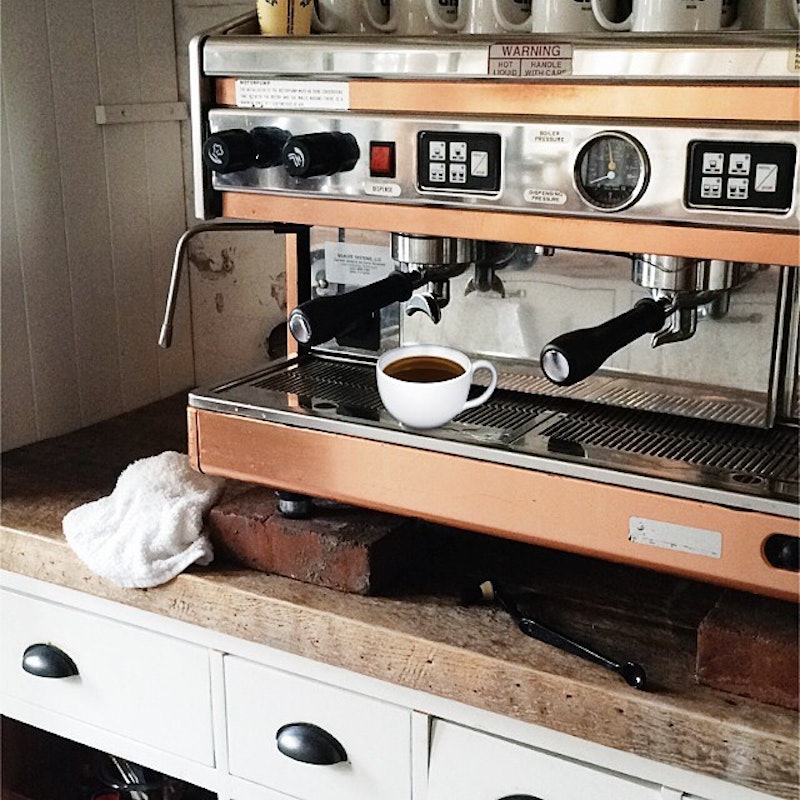 Brookyln-based art director Brad Warsh, who has done design work for companies such as Facebook, Intel, and Coca-Cola, is making waves in with his new Emojis IRL project. Using only his iPhone and the world around him as his canvas and inspiration, he inserts emojis into real-life situations — and the results are hilarious. The photos would be mundane if it weren't for the inclusion of the little iMessage images we all know and love, and they absolutely prove that emojis are a part of our lives for good.

Warsh tells Bustle that he came with the idea on accident. "I was playing with a picture messaging app and realized that I could type over the image with enlarged text and emojis (before you could do it on Snapchat)," he wrote in an email. "I put a sad face emoji over someone's head and it looked hilarious." He says one significant challenge he faces is adjusting the emojis to the correct perspective or scale; it's not possible to adjust the size or rotate the emoji within the app he uses, the way it is with Snapchat.

Warsh says doesn't know what's next for the project, but he certainly has ambitions to continue it. He's even got some special ideas for one particular emoji in mind. Wrote Warsh to Bustle, "I really enjoyed doing a series of photos featuring the pedestrian emoji. There's something kind of depressing and funny about him. I thought about traveling the world and just placing him in different cities, just walking alone. But then I realized i can't afford to do that. Maybe one day ..."

Check out a few of my favorite emoji/reality world-clashes below, and head on over to Brad Warsh's website to see the complete Emojis IRL series.

9. Flying Over the City

More like this
The 'If I Text You This, It Means' Emoji Meme On Twitter, Explained
By Natalia Perez-Gonzalez
What Does POV Mean On TikTok? The Popular Acronym, Explained
By Emma Carey
Here’s How To Get Verified On TikTok
By Emma Carey
7 Birthday Instagram Story Ideas Your Friends Will Love
By Emma Carey
Get Even More From Bustle — Sign Up For The Newsletter