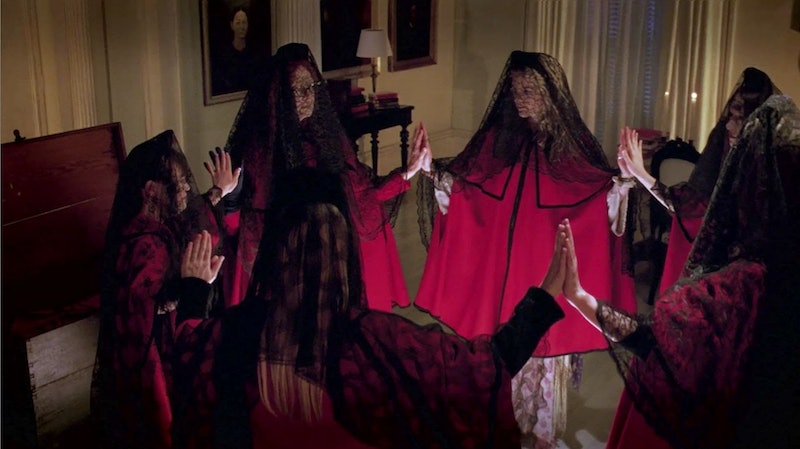 In hindsight, we should have known that the American Horror Story: Coven cover of Entertainment Weekly’s Nov. 29th issue wasn’t just offering up a silly photo shoot. You had Fiona and Laveau, standing tall and elegant. Then, resting on a serving tray in the latter’s arms: the third American Horror Story: Coven matriarch, Madame Delphine LaLaurie. Or rather, Madame Delphine LaLaurie’s head. So when that unmarked box showed up to Robichaux’s at the end of tonight’s episode, begging to be opened… it was already pretty obvious what would be inside. That’s two heads in boxes now (one minotaur, one ageless human) in one season. Decapitated head-wise, no one will ever top the “WHAT’S IN THE BOX?!?” scene from Se7en. But AHSC has really put some points on the board!

Of course, as always, a severed head special delivery is the least haunting part of an episode that included (in no particular order):

And that doesn’t even touch on the resurrection of another two characters (Myrtle and Patti LuPone) or our introduction to the term “swamp witch,” a label that as hissed by Fiona sounds like all the worst racial epithets combined. In short: Wednesday's episode was a perfectly wonderful, if not classic episode of AHSC that kept moving pieces into place for what will surely be a BLOODBATH of a conclusion.

Most pertinent to the end game, and the focus of last night’s episode: What to do with Fiona? Cordelia, her daughter, wasn’t exactly conflicted about what needed to be done — five minutes in, she and the remaining Robichaux witches were already talking “battle plans.” None of them offered any objections, either, and, soon enough, the plan had taken shape. The only way for a new Supreme to ascend, Myrtle explained, is with the willing (enough) death of the one before. And since Fiona would clearly not go down without a fight, they’d have to trap her.

Luckily for them, Fiona’s cancer had begun to take a more severe toll on her body, leaving her depleted and half-conscious — the perfect mental state in which to be psychologically punk’d by not one, but two witches she’d killed. First, Madison sauntered into Fiona’s room all “I’m alive!” and “I’m the Supreme, didn’t you know?”, two possibilities that did not sit right with Fiona. And then, Madison’s speech already getting her to consider suicide, Fiona was greeted by her old nemesis Myrtle, who laid out the life of decay and sadness that lay before her if she didn’t die. In most situations like these, friends and family gather to convince you you’ve got everything to live for. But Fiona’s kin definitely went a different tack!

So Fiona took the pills Madison left her and slowly drifted off to sleep when… witch please (sorry), Fiona was never going to go out like that. Before she could meet her maker, a spirit world Spaulding — with the gift of speech! — reminded her once more of WHO. SHE. IS. “You’ve allowed a bustle of lesser witches to lead you to this ignominious end.” And with that quick pep talk, Fiona returned once more to the land of the living, totally ready to eff ess up.

More like this
Everything To Know About When You Can Stream 'Nope' From Home
By Arya Roshanian
The 'Nope' Ending, Explained
By Morgan Leigh Davies
Lisa Kudrow Explained How Her Body Image Changed While Filming 'Friends'
By Grace Wehniainen
The 'Black Bird' Stars Are Both Heading Back To Apple TV+
By Brad Witter
Get Even More From Bustle — Sign Up For The Newsletter