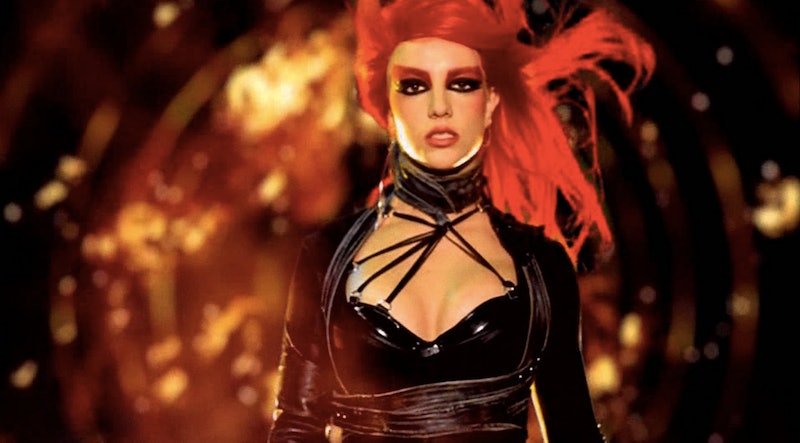 It's been long established that "I Wanna Go" is without question the weirdest Britney Spears music video of all time. But, when you make even a shallow dig into the pop sensation's video catalog, you'll notice that even the most revered tracks have strange accompanying videos. Which brings us to everyone's fave Britney jam, "Toxic." You, me, and your mom can all agree that "Toxic" is a great song, right? Well, I hate to be the bearer of this news, but the music video is... well, more than a little confusing.

And hey, don't get me wrong, it's a cool music video! It's visually arresting in its own right, no doubt about it. But the fact of the matter is, the plot is kind of, ah... wild. Like, I get that Britney is supposed to be some kind of spy (hence all the wigs), but I don't really understand her motives, I didn't feel like there was any strong character development, like the lack of cohesive story is really what takes me out of this video. The awkwardly suggestive dance moves do not help.

But before you protest, feel free to rewatch the video below, and then relive with me the weirdest moments from "Toxic."

1. When Britney gets a phone call on a plane.

How is she getting adequate reception, who's even calling her, doesn't she even know that taking a phone call on the job is completely unprofessional?

2. When Britney encircles her boobs.

I hope people were breaking out this dance moves in the club circa 2003.

The naked jump suit that makes all naked dresses look like quitters.

4. When this rando shows up and Britney is like, "Yes, I want a piece of that."

I guess we're supposed to 'ship this.

5. But then, when Britney rips off his face and it's revealed he's like... kind of hot in a dollar store Brad Pitt way.

I still don't really know what his role is in any of this, though.

6. And then when this happens — like, what are you even trying to accomplish?

Besides the obvious, I guess.

7. When Britney is riding on the back of some shirtless guy's motorcycle.

Is this really the most stealth way to get around if Britney is doing a covert mission? Because I feel like no.

8. When Britney pulls a Johnny Cash and walks into a burning ring of fire.

Or rather, walks away from a burning ring of fire. Not really sure if said ring of fire is supposed to be a security measure, but it's safe to say that, if it is, it's terribly ineffective.

It looks like an item you'd find in the Pokemon trading card game.

10. When Britney, in full Poison Ivy, swipes this mysterious concoction and then walks out like it ain't no thing.

She obviously gets stopped by 40,000 lasers, but come on, girl, that's amateur hour.

11. WHEN WE CUT TO THESE TWO RANDOS TAKING A SHOWER TOGETHER.

It's really quick and out of nowhere and I don't know if this is supposed to provide backstory of some kind. Is the guy in the last scene like her boyfriend or something...? I don't...?

13. When Britney reveals that she's part-butterfly.

So, she's not half girl, half robot, half ravioli?!

14. When Britney throws down this guy... twice.

15. And then when she poisons him, which seems like a really out-of-the-way way to kill a guy. Like why don't you just shoot him? Why infiltrate a dangerous poison and scale a building with plungers?

This look is called, "But mom, you promised if I passed seventh grade chemistry I can go to the Marilyn Manson concert!"

16. And finally when Britney jumps out of a window and ends up in a plane, in her hideous stewardess outfit.

I know you want to rewatch the music video now: