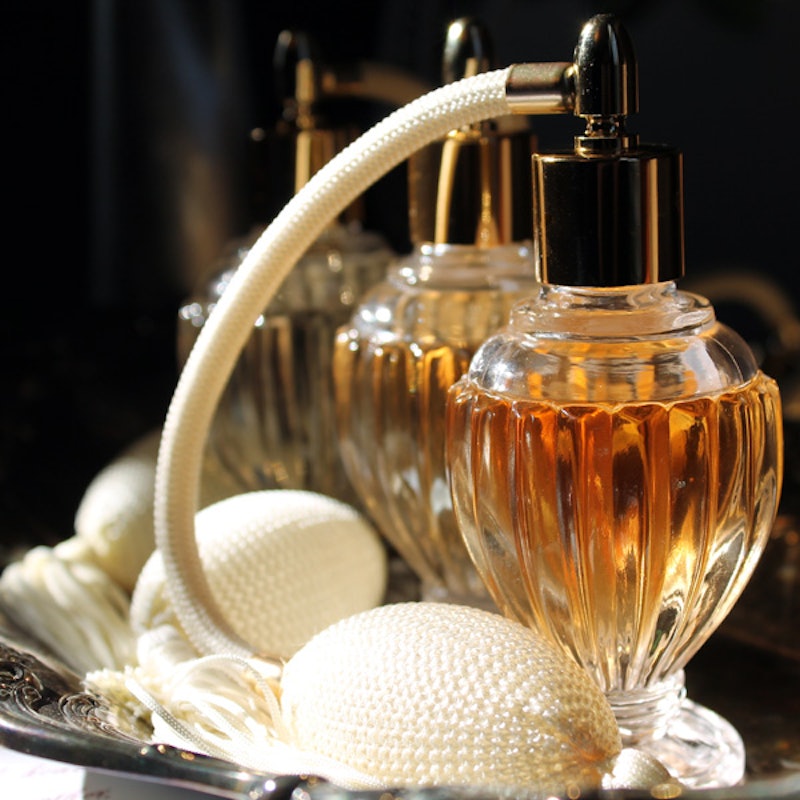 If you're a perfume aficionado, you probably know the basics of the modern history of perfume. You know how Guerlain and Coty were the first big companies to mass-produce perfume, you know that Chanel No 5 smashed sales records and made perfume history, and you understand how scents marketed by famous women from Elizabeth Taylor to Katy Perry have defined the perfume market for decades. But the slick glass bottles and perfectly airbrushed celeb campaigns of today's perfume counters belie a frankly strange history that stretches back thousands of years — and involves chemicals derived from the butts of dead cats, the Crusades, "god sweat," scented feet, the Plague and whale vomit.

The history of perfume is more than just the history of human beings trying to smell nice — it's a history filled with much strife and innovation. The ingredients that are used to create scents have historically been hugely important for trade routes; high-class scents have always been used as a method of distinguishing nobility from the peasantry (Elizabeth I wore a perfume made of musk and rose-water, while Napoleon ordered 50 bottles of cologne a month), and fragrance has been tied to expressions of religious devotion, health precautions and cleanliness efforts for most of the history of human civilization.

Here are some of the ancient origins of perfume. Take them in, and then look at your bathroom cabinet with relief.

The Egyptians were huge fans of perfume, and used it for both ceremonial and beautification purposes: fragrance was thought to be the sweat of the sun-god Ra. They even had a god of perfume, Nefertum, who wore a head dress made of water lilies (one of the biggest perfume ingredients of the time). Archaeologists have also uncovered many Egyptian recipes and elaborate prescriptions for perfume-making. If you were a king or other person of high status in Egyptian society, perfume of some sort was going to be part of your everyday life, smeared on you in the form of scented oil to keep you fragrant. (In the modern world, alcohol is the base material on which perfumes are built, but in ancient times, perfumes were made with an oil base.) In fact, the University of Bonn is currently trying to recreate a pharaoh's perfume from 1479 BC, based off its dessicated remains found in a flagon. Chances are it'll be sticky and smell heavily of river botanicals and incense. (And no, poor people didn't get to wear any perfume.)

Egyptians imported huge amounts of perfume ingredients from Punt, a region of Africa which specialized in aromatic woods and myrrh — so much so that the perfume trade was a big part of international relations for both of the regions. It was basically the equivalent of the U.S. and China striking a million-dollar trade deal for sandalwood.

The ancient Persian royal class was also seriously invested in perfume — so much so that it was common for kings to be pictured with perfume bottles in Persian art. The legendary rulers Darius and Xerxes are shown in one relief sitting comfortably with their perfume bottles and holding perfume flowers in their hands. It was the ancient equivalent of Prince William having a Burberry fragrance contract.

The Persians dominated the perfume trade for hundreds of years, and many believe that they invented the distillation process that led to the discovery of base alcohol. One thing we do know for sure is that Avicenna, the Persian doctor, chemist and philosopher, experimented extensively with distillation to try and make better scents, and was the first to figure out the chemistry behind perfumes that weren't oil-based.

So many ancient Roman and Greek perfume recipes have survived (including those inked carefully by people like Pliny the Elder in his Natural History) that we are actually able to recreate ancient perfumes in our modern era. The ancient Greeks and Romans carefully documented their perfume-making processes. In fact, there's even a mural in a perfume-maker's house in Pompeii documenting the process of making Greco-Roman perfumes: first, oil was made by pressing olives; then ingredients like plants and woods were added to the oil using meticulous scale measurements from a recipe; finally, they were left to "steep" — that is, the ingredients were left in the oil so that the oil could take on its scent — before being sold.

The world's oldest perfume factory was unearthed in Cyprus in 2007 — the mythological home of Aphrodite, goddess of love. But this probably wasn't a coincidence. The cult of Aphrodite's strong cultural link to perfume meant that this perfume factory was probably supplying scents for the temples and worshippers. Perfume was often used in ancient societies to bring believers closer to the gods. But scent wasn't just for religious purposes: it was everywhere. By a rough guess, by 100 AD Romans were using 2800 tons of frankincense a year , and perfume was used in beauty products, public baths and even on the soles of feet.

Ironically, Pliny's meticulously kept recipe records were actually part of a condemnation of perfumes. In James I. Porter's Constructions of The Classical Body , he points out that excessive use of perfumes were actually seen as un-Roman by some; Pliny approvingly recounts how an aristocrat's hiding place was discovered by the scent of his perfume. Some people definitely thought pretty scents should stay confined to the temples.

The ancient Chinese relationship with scent didn't really focus on the body: rather than wearing perfume, ancient Chinese culture utilized scent by burning incense and fragrant material in special spaces. Histories of the use of scent in Chinese society tend to emphasize that perfumes weren't originally considered a cosmetic there; rather, they were used for disinfection and purity, as it was believed that they could eliminate disease from rooms. While scented flowers were a part of traditional gardens, and mandarin oranges were once used by noblewomen to scent their hands, it seems that for centuries, wearing perfumes on your body wasn't necessarily the "in thing" in China.

But even though there's a myth today that there was no perfume used on bodies in ancient China, it's nonsense. According to Chinese chemistry historians, the period between the Sui and the Song dynasties was rife with personal perfumes, with nobles competing for the best scents and importing ingredients via the Silk Road. By the Qing dynasty (1644-1912), the emperor seems to have carried a "perfume pouch" year-round, an adaptation of the traditional pocket pouch that brought good luck — except that his was stuffed with fragrant herbs.

The big difference between this and other perfume traditions, though? A lot of Chinese perfume ingredients were also used for many other purposes, like food and medicine.

If you were anybody in Europe from the 1200s to about the 1600s, you carried a pomander — a ball of scented materials, kept inside a lovely open case, and used to ward off infection and keep the air around you clean. Since the medieval Europeans literally thought that bad air could make you sick (it's called the theory of the miasma, which postulated that diseases were thought to be suspended in badly scented, unhealthy air), these little baubles were seen as life-savers as well as charming accessories.

The whole idea of this portable perfume seems to have popped up in the Middle Ages after Crusaders, returning from holy wars in Arabia, also brought back their enemies' perfume-making secrets. Even though the idea of personal oil-based perfumes didn't catch on, they discovered that civet, castor, musk, ambergris and other animal-based products made great bases for scents, and carried scent bags or sachets to perfume their clothes. But the first alcohol-based perfume was created in this period, too: it was known as Hungary Water, because it was believed to have been created for the Queen of Hungary during the 14th century, and involved distilled alcohol and herbs (probably rosemary and mint).

A serious breakthrough in perfume production came in medieval Italy, when they discovered how to create aqua mirabilis, a clear substance made of 95 percent alcohol and imbued with strong scent. And thus, the liquid perfume was born. After this invention, Italy — Venice in particular — became the center of the world perfume trade for several hundred years.

If there's one person who definitely brought Italian perfume to France and the rest of the world, it was Catherine de Medici, who as an Italian bride wed to the French king had her own perfume made up for her by her Italian parfumier, Rene le Florentin (Rene the Florentine) – a scented water with bergamot and orange blossom. He also created musk and civet-scented gloves for her, which were a sensation. Given that Catherine's been accused of murdering people with gloves daubed with poison, this is actually pretty poetic.

From there, things accelerated: after a brief dip in perfume popularity in repressed Victorian England, synthetic compounds began to be discovered in the late 1800s, and the modern perfume industry was born. So next time you daub on some of your Miss Dior, enjoy — and be thankful you're not carrying around beaver-butt liquid.

More like this
This Week’s New Makeup Releases & More Beauty Headlines
By Audrey Noble
The 12 Best November 2022 Beauty Launches, According To Our Editors
By Rachel Lapidos
All The Products Hailey Bieber Used For Her Birthday Makeup Look
By Olivia Rose Ferreiro
10 Makeup, Hair, & Skin Care Gifts That Beauty Lovers Will Drool Over
By Erin Stovall
Get Even More From Bustle — Sign Up For The Newsletter