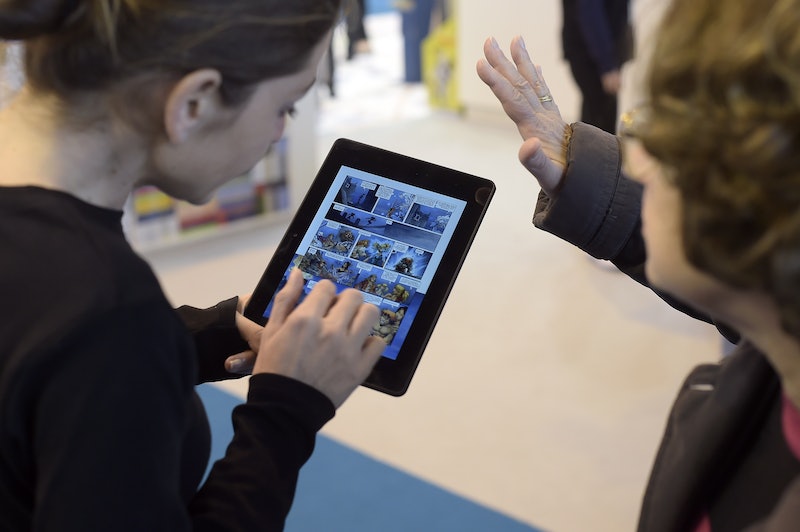 According to a new survey from Publishers Weekly released Friday, Millennials still prefer traditional paper books to e-books — but not by a wide margin. The polling was informally conducted by gathering reader responses from social media. Craig Teicher, writing for PW, notes that the survey's results were unlike those he has seen in the past, saying: "Millennials I've polled won't touch e-books with a ten-inch tablet, though they love the digitization of most of the rest of their lives."

The PW survey's results are somewhat unexpected. Given our affinity for digital consumption, it's no surprise that, according to a 2013 consumer study, Millennials get 35 percent of our media digitally and 32 percent of it traditionally. But books, it seems, are an exception in our lives.

Books read for pleasure, that is. Comments from the PW survey show that Millennials aren't opposed to using e-books for work or school, especially if their traditional alternatives would be impractical to tote around. As one commenter points out, an e-reader is more convenient for university students, "because the Kindle weighs about 2 ounces and the Norton anthology weighs a metric ton." A graduate student noted that keeping her school texts on an e-reader made perfect sense, because having her "textbooks available at work or at home without having to carry them back and forth is invaluable, as is the ability to search the text for key phrases or vocabulary."

In a country where 61 percent of adults experience eye strain, and 30 percent of us get nine or more hours of screen-time each day, Millennials are the most connected demographic. We spend an average of 9.5 hours each day on digital devices, and 70 percent of us show signs of eye strain from using them. Millennials use smartphones, tablets, and laptops for work, school, and everything in between.

Perhaps it is because we are so connected that Millennials still mostly enjoy keeping our pleasure reading non-digital. One commenter explicitly stated that her choice to read paper books was founded in digital fatigue: "I use a computer enough for work and as a writer/blogger, so the last thing I want is even more screen time while reading." Being in the same field, I can empathize with her reasoning.

Ultimately, I think we can agree it doesn't really matter how people read — so long as they do so.