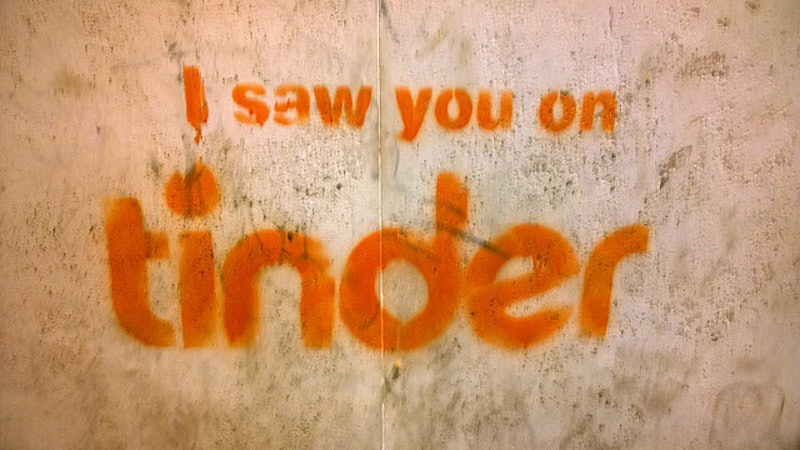 Sometimes — no, always — what we see on a Tinder profile doesn't tell the whole story about a person. So what would these profiles look like if they accurately described how users come across in person? Nathalie Lepaffe's 'Honest Profile' Tumblr answers this question in the most hilarious way possible: by rewriting Tinder users' profiles after she went on dates with them. Lapaffe, a copywriter, law school graduate, Belgium native, and New York resident, told Bustle she started her project for a copywriting class, though not without some, er, dissent:

When I explained to my mom my project, she said that she already knew that I was probably going to end up stabbed somewhere, but she is excessive, like every mom.

And as expected, like everything women do online, the series has received some backlash: One commenter wrote their own "profile" characterizing Lapaffe as "the sociopath," to which she responded, "I plead guilty" — but she doesn't actually feel bad, she told Bustle, since everything she wrote was honest. She does regret, however, that some people are using her Tumblr as fodder for their anti-feminist views. To the contrary, "It's not against men; it's about online dating and nothing more. If I were dating girls, I would do it exactly the same way."

Lapaffe also mentioned that though she used her dates as inspiration for her series, she only met guys she genuinely wanted to go out with. When things went sour, though, the circumstances led to some pretty entertaining profile rewrites. Here they are:

We've all met that dude — or, should I say, douche — who lies about his height and reminds his dates that he works at Google and is an expert at golf and pool because "you just have to use all your body. By the way, don't forget to look at mine."

Tinder is swarming with these. But has anybody even met them? Lapaffe confesses she didn't meet this one, theorizing that this shirtless selfie may not even be of him. Nobody will ever know, though, because the creep's immediate kinky sexting drives everyone away.

We've all fallen for this guy. He fancies himself a starving artist and loves to complain about escalating rents since he's such a gritty and authentic musician who is unwilling to sell his soul to The Man (or, as Lapaffe puts it perhaps more accurately, just a "cheap bastard").

We can thank this one for being honest about his "lame personality" on his profile. As another hilarious touch, Lepaffe turned the name of his Tumblr, which appears to contain a collection of photos, into "we don't care about your photos" — a more appropriate name if he's sticking to the whole "honest" persona.

Nothing against nice guys, but there's a difference between being nice and being just plain insecure to the point where "you'll be afraid to make me cry by asking me to pass the salt." This is the same kind of guy whose initial message reads "I'll understand if you don't want to respond."

If you've got your own characterizations of your Tinder dates, Lepaffe is looking to expand her page and is taking submissions from readers. Head on over to the Honest Profile Tumblr to check out her "honest profiles" and submit your own. New Yorkers, keep an eye out for the dudes in the blurred-out photos.