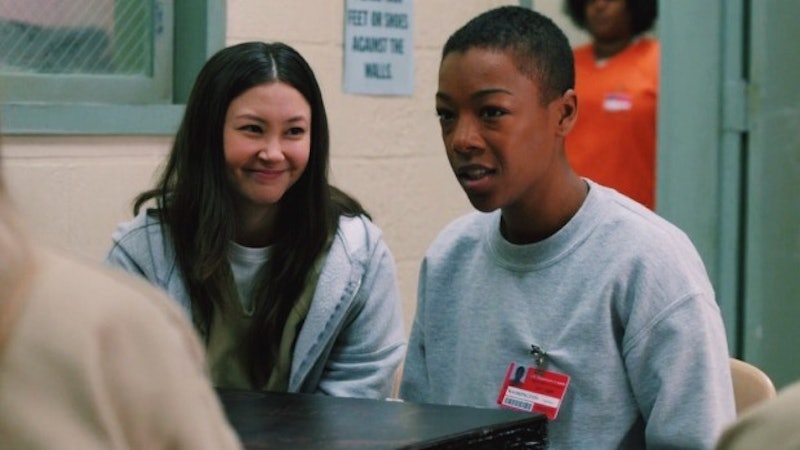 If you're like me, you managed to marathon all of the Orange Is the New Black Season 3 episodes in, like, a day's time. (Maybe two days if a social obligation simply could not be avoided.) That means us fans have almost an entire year ahead without the Litchfield ladies. Fortunately, the downtime means we get to theorize about the upcoming season. Aka will my new favorite maybe-couple Soso and Poussey date on Orange is the New Black Season 4? Samira Wiley, who plays Poussey Washington, spoke to Bustle about her character's future as well as what fans can expect from OITNB Season 4 once it makes its grand debut. And one storyline, in particular, that Wiley seems eager to explore is finding a potential new love interest for Poussey, though she played coy as to who this mystery person may be (*cough, Soso please, cough*).

"Well, I hope there's a potential romance going on between Poussey and someone," the actress teases. "I'm not sure exactly who that person is or if that will be a thing, but I'm definitely in the corner of wanting her to find some love."

And, given that Season 3 concluded with the rather sweet image of Poussey and Soso holding hands while floating in the water, I'd say these two are already well on their way to being your favorite new OITNB 'ship. (Sorry, Piper and Alex!) For starters, they're both looking for the exact same things: Companionship and intimacy — something that Taystee has been unable to give to Poussey, despite our 'shipping cries.

So, the only question that remains is, does Wiley herself think her character and Soso would be a good fit together? "Oh, absolutely," Wiley admits. "I think coming off of where we ended Season 3, they are both so lonely and they're both delving into some self-destructive behavior because of it."

Of course, she's referring to Soso's attempted overdose and Poussey's continued struggles with alcohol. But, those dark days may be just the thing that helps these two lost souls find their way into the light and into each other's arms. "It makes a lot of sense that people who are going through similar times in their lives will gravitate toward each other," Wiley says. (Is it too early to start picking out a couple name for them? Because I'm personally a fan of Pousoso.)

Potential adorable romances aside, that wasn't the only detail Wiley was willing to dish about Season 4. Now that the prison is officially privatized, the new system and extra inmates will take its toll on our main characters. "It's becoming much, much more of a machine," Wiley shares. "So, I think we'll see how that affects the girls' spirits while they're inside." Not to mention the dynamic that will emerge between "the new prisoners versus the OG prisoners." (Anyone else picturing some epic cafeteria showdowns?) I think I speak for everyone when I say Season 4 can't get here soon enough.