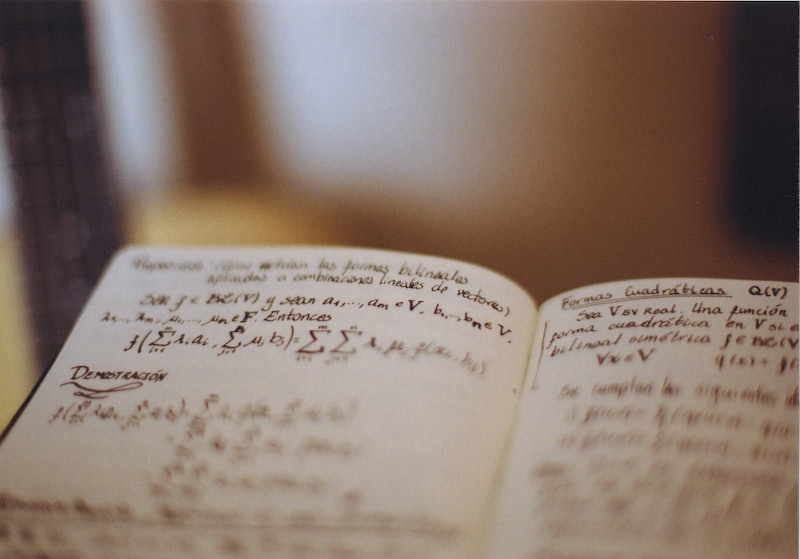 I'm going to let you in on a little secret: the best part of college isn’t being away from your parents, or having bounds of unbridled freedom — it’s having the ability to choose your own education, and to take courses in subjects you actually find interesting and useful. Take math, for example. Either you love it, or you hate it, and if you're in the latter category, four more years of math classes may seem daunting. But believe it or not, there are college majors that don't require math (or at least, they require very little math), and they might be exactly what you're looking for as you get ready to plan your academic career.

But before you throw away your graphing calculator, it is important to note that most universities require underclassmen to complete foundation requirements, like an English composition class, before applying to their desired major. These foundation courses often include an introductory math class, which can range from mathematical modeling to calculus. Depending on the major, the college may even suggest taking a "preferred" course to increase your chances of being selected. Taking and passing advanced placement math courses in high school, such as AP calculus AB/BC and AP statistics, may satisfy those requirements before you even attend college.

Of course, math skills may be required in majors not typically associated with the discipline. Sociology (the study of social behavior), for example, is a science, albeit a social science, that requires research skills which are learned through statistics courses. Journalism majors are also typically required to take a statistics course to learn how to collect and analyze quantitative data. Economic classes, which involve data collection, reasoning, and mathematical models, can also be preferred courses for journalism majors.

The truth is, math and its applications can be involved in a variety of subjects and class courses, and thankfully most universities have free tutoring programs for students. But hey, if you know what you're good at (and it's not math), here are seven majors to consider if you never want to take another math class again.

Performing arts programs such as theater, acting, dance, and music usually require an audition before entry into the major. Besides core classes, humanities classes like philosophy, religion, classics, and foreign languages are often preferred courses, and provide performing arts majors the exposure to both past and present fields of art.

Many interdisciplinary programs allow students to design their own major, typically within the liberal arts and humanities fields. Majors within the race, gender, and sexuality disciplines allow for flexibility in the types of classes majors can choose from. Interdisciplinary programs often include women's studies, African-American studies, and Latin-American and Caribbean studies.

Besides hours of major coursework, foreign language students are often required to take linguistics (the scientific study of language), history, and religion courses, as well as social sciences classes, like sociology and anthropology.

Depending on the school, art majors can concentrate their studies in a variety of subjects, including graphic design, interior design, drawing, printmaking, painting, and photography. A capstone course or a final portfolio project is usually a requirement to graduate.

The left brain versus right brain debate often categorizes individuals into two camps: analytics and creatives. English and comparative literature majors (who direct their literary focus across multiple cultures and languages) can rest easy knowing that calculus equations are usually not a part of pre-requisite classes.

Unless you're attending a theology school, religion majors study the historical, political, and sociological foundations from the major religions of the world. Majoring in philosophy guides students through the study of reality, existence, knowledge, values, and reason. Both majors can be useful in business, law, political science, education, and communication careers.

Majoring in history can often elicit some side-eye, and prompt questions on what career you'll be pursuing after college. Most history majors do not go on to become historians. However, the research, writing, and critical analysis skills learned in college history courses are tools for success in a variety of career fields.