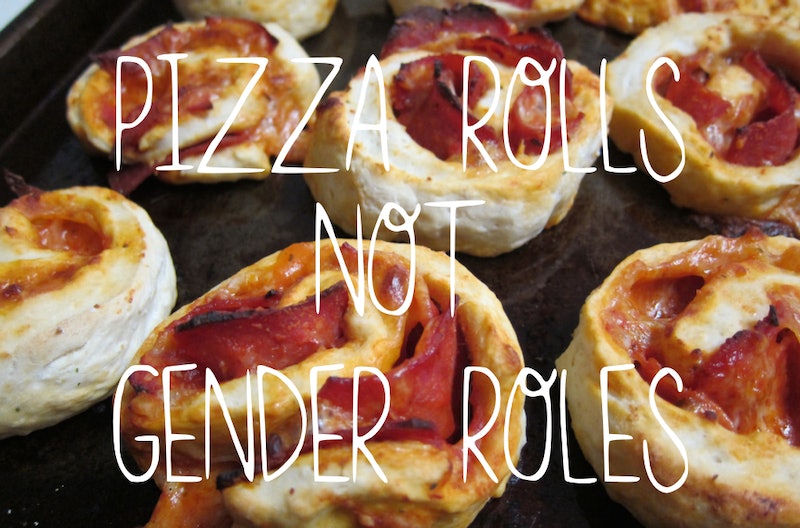 I was recently having a conversation with a fellow feminist friend who studies Women and Gender Studies at my college — and in the middle of it, I realized the conversation we were having would make absolutely no sense to anyone who isn't a Women and Gender Studies major. You know how there are certain things only theater students and performers understand? The same is true for any group of people, whether it's your classmates in a certain major, co-workers at a certain type of job, or even people born on drinking holidays. Groups and communities have their own rules, lexicon, and customs that other people don't necessarily understand, even if you desperately wish they could.

When it comes to people interested in Women and Gender Studies, sometimes we kind of wish everyone else understood with the same intensity as we do that gender is a social construct. We wish everyone knew how absurd it is to gender absurd that clothing, toys, and other inanimate (or animate!) objects. We wish that the rest of the world could see why The Big Bang Theory is super problematic, or why we think "Blurred Lines" should be removed from the radio immediately, never to resurface again (besides that whole plagiarism thing, that is). But at least the nice thing about the Internet is that, even if people in the "real world" don't always get it, we can always find people online who do. So in the spirit of comradery, here are 13 things all Women and Gender Studies majors understand:

1. We know that gender is just a performance.

And that we are just acting out the socially constructed categories of gender every single moment of every single day.

There aren't just two genders; gender is an entire spectrum.

3. Theory is your best friend.

Because you're going to spend hours and hours reading Judith Butler, and Eve Sedgewick, and Gloria Anzaldúa, and Jasbir Puar, and Judith Halberstam, and Lee Edelman, and...

4. The world is a really problematic place.

Nowhere and no one is safe. Even Tina Fey has said some problematic stuff. But acknowledging the problems is the first step to finding solutions, so at least there's that.

5. You don't understand why some people don't identify as feminists.

6. But you also know that some people who preach feminism don't fully understand the complexities it involves.

8. Everything is the fault of the patriarchy and/or capitalism.

9. You know the exact definitions of "heteronormative," "cisgender," "queer," and "marginalized."

They pop up in your day-to-day conversations all the time, too.

11. If you're wear makeup, you're really sick of hearing "but how can you be a feminist if you wear makeup?"

And you know exactly how to shut down any arguments that say it doesn't.

13. If you ruled the word, you'd make sure Women and Gender Studies was a required class for everyone.

More like this
Beyoncé & Madonna’s “Break My Soul” Remix Honors A Group Of Black Icons
By Stephanie Topacio Long
Charlene White & MPs Lead Tributes For Bristol Bus Boycott Organiser Roy Hackett
By Sam Ramsden
25 Things I've Reduced My Life To, In Addition To WFH In My PJs
By Ginny Hogan
22 Movies On Netflix That Are Perfect For The Whole Family
By Bustle Editors
Get Even More From Bustle — Sign Up For The Newsletter