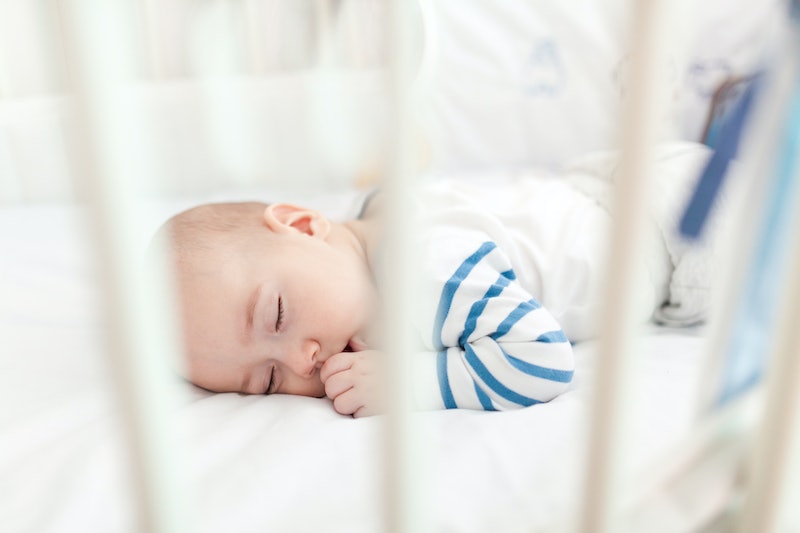 Every year, up to 3,000 babies are diagnosed with shaken baby syndrome — otherwise known as abusive head trauma (AHT), which can tragically lead to blindness, seizures, brain damage, and even death. (In fact, according to the Centers for Disease Control and Prevention, one in four of those babies will likely die from their injuries.) But experts are now rethinking just how accurate the diagnostic measures for shaken baby syndrome are. In a study published in the medical journal Pediatrics, medical professionals claim they have actually devised a validated "prediction tool" to avoid future misdiagnoses called the PredAHT.

To give you some context, before a baby is even diagnosed with SBS, courts look for two main symptoms: bleeding and swelling in the brain, and retinal bleeding in the eyes. There is, of course, other evidence that's taken into account as well, but these main factors are what's largely considered before a parent or caregiver is convicted of abuse. Yet as NPR reports, there's been a small group of experts calling these standards into question for years, suggesting that other factors — like falls, accidents, or other medical conditions — could also be to blame for the symptoms associated with SBS; and it's time we paid attention to them.

"It is vitally important that abuse head trauma is diagnosed accurately so that the team looking after the child can ensure that they receive appropriate support and are protected from further harm," lead study author Laura Elizabeth Cowley told NPR. (Cowley is a doctoral student at the Cardiff University School of Medicine in the U.K.) At the same time, Cowley notes, "it is also important that accidental head injury cases are not wrongly diagnosed as abusive ... this can have devastating consequences for the families involved."

As for what a "prediction tool" really involves, it's pretty basic. The new diagnoses method is basically a checklist, requiring doctors to note cases of rib fractures, seizures, long-bone fractures, bruises on the head or neck, periods of not breathing (aka apnea), as well as bleeding in the retina of the eyes and brain. Essentially, this longer-form checklist allows medical experts to explore alternative reasons why a baby might be suffering certain injuries, instead of jumping to the conclusion of abuse.

In order to test the tool, the medical records and child protection files were reviewed for 198 different babies who showed signs of head trauma. Researchers also took into account investigative evidence (like witness testimonies or confessions) to further inform their diagnoses. In all cases where infants showed at least three of the six symptoms listed, medical experts issued an SBS diagnosis.

So how did the new method fair? In the end, it correctly identified 82 percent of 133 cases as not abusive, and correctly found that two-thirds of the other 66 children had suffered abusive head trauma. It did miss the mark in a few places, though. Thirteen cases of abuse were missed, because the child didn't have enough of the symptoms listed in the tool. And 12 cases were mistaken for abuse, because they involved substantial but deceiving injuries — all were actually from a car accident or some other incident.

While more research is still needed to be done, the PredAHT tool is certainly a step in the right direction. It also gives hope to parents who may be wrongly accused of abuse against their child — a heartbreaking reality that unfortunately happens more than we may realize.

More like this
How To Fight For Reproductive Rights, Based On How Much Time You Have
By Courtney Young
5 Ways To Stand In Solidarity With Women In America From The UK
By Sophie McEvoy
The Families Of Grenfell Tower Are Still Waiting For Justice, Five Years On
By Bustle UK
Boris Johnson’s Leadership Is In Question – Again
By Bustle UK
Get Even More From Bustle — Sign Up For The Newsletter