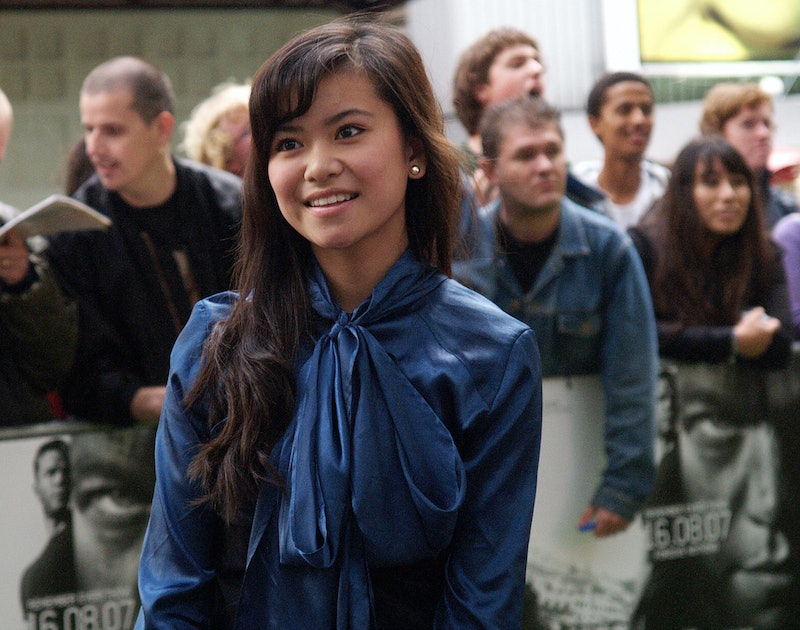 I was always jealous of Cho Chang, both when I was reading the Harry Potter series and when I saw the movies. She was brave, smart as a whip, an excellent Quidditch player for Ravenclaw, and she managed to charm two of the most eligible bachelors at Hogwarts School of Witchcraft and Wizardry: Cedric Diggory (RIP) and Harry Potter himself. The casting for Cho was as good as the casting for the rest of the film. Actress Katie Leung did a great job as the soft-spoken and strong character, but what has the actress who played Cho Chang been up to since the last Harry Potter film wrapped? She's been busy figuring out life, like the rest of us twenty-somethings, and exploring a lot of options. And it seems like, just like Cho, Leung is good at everything she tries.

Leung, who was raised in Scotland, auditioned for the role of Cho Chang on a whim at the age of 16 at an open call even though she didn't have any training in acting. Luckily, she got the part and Cho made made her debut in the fourth HP film, Harry Potter and the Goblet of Fire. But after Harry Potter ended, Leung didn't know what she wanted to do. She was only 20 at the time, and even thought about quitting acting. Thankfully, she stuck with the craft, and now, in 2015, she's one of Britain's most-watched young performers. Here's what the former Ravenclaw has been up to post-Harry Potter:

She Went Back To School

Leung was dangerously close to quitting acting for good after the Harry Potter movies, but enrolling in a drama class thankfully changed her mind. She told the Evening Standard in 2011, "Harry Potter was an amazing experience but I didn't know whether I was chosen on my acting ability or because I fitted the character at the time." She decided to find out more about her acting skills by taking an intensive summer drama course at the prestigious Royal Conservatoire of Scotland, which relit her fire. "Going to drama college reconfirmed my passion for acting," she said.

She Rocked The Stage

The 27-year-old's first venture into stage acting was met with rave reviews. In 2011, she earned the role of Jung Chang in the Young Vic's stage adaptation of Wild Swans, and her performance was heralded. The play was adapted from the best-selling autobiographical book from author Jung Chang about three generations of women in China, and the trials and tribulations that test them within their family and within the country. The Telegraph called the Young Vic's stage adaptation "enormously refreshing and vitally important."

Leung was honored to be part of such an important and telling story of China's history. "I think it's vital for all of us to be aware of China's history in order to grasp its traditions and culture, particularly in today's society with the unstoppable rate at which the economy of the country is growing and changing. It is also important to understand the struggles and sacrifices of the older generation in order for us to be grateful of all the things which we so easily take for granted nowadays," she told the Boston Phoenix in 2012.

And She Rocked The Small Screen, Too

Leung has gone for troubled, complex, interesting characters in her TV projects following Harry Potter, and she's more than risen to the occasions. She starred in the British Channel 4 series Run, playing an illegal immigrant doing whatever she could to survive in Britain. She also starred in Sundance's miniseries One Child, a bleak drama starring Leung as a Chinese woman named Mei living in Britain, who is called back to China due to a harrowing family tragedy. Her work has been political, gritty, dark, and really, really good. She's committed to telling the stories of people we don't often see.

Her Star Is On The Rise

The actress' talent has not gone unnoticed. In the fall of 2014, she was among the honorees of the BAFTA Breakthrough Brit Award, which recognized her many talents and great performances in the past few years. And she was thankful for the honor. "It feels amazing. I’ve known about it for a month, but couldn’t tell anyone — it was a bit like when I got the role of Cho Chang and couldn’t tell anyone. It’s a great honour. I’m really grateful," she told the Daily Record when she was announced as a winner.

She Has Plenty Of Other Talents

When she was trying to decide if acting was for her, Leung was all about creative exploration. She took up photography for four years, and she is also a painter. She's a woman of many passions, but she admits that now she thinks acting is the right choice for her.

Though she's not pursuing photography professionally anymore, Leung still posts a good amount of her photos on Instagram, and she'll never stop being proud of Cho Chang. Here she is on a recent visit to Honeydukes. Even though the roles she's drawn to now are about as far away from Cho as she could get, Leung will always be the Ravenclaw girl to me.

Right now, Leung is busy taking over Europe with her acting skills, but hopefully she'll be back on American screens soon.