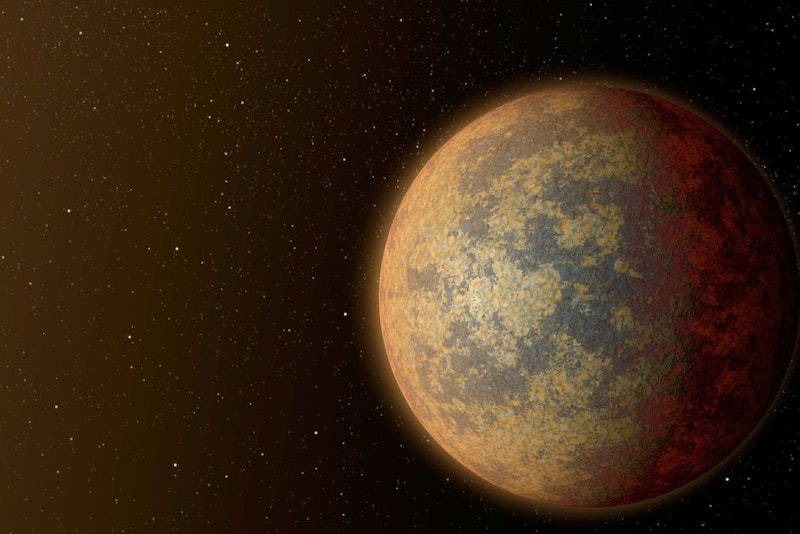 Looking for a new place to live? You're in luck: NASA just announced finding a nearby spot — and it's only 21 light years away. A new study reported in the journal Astronomy & Astrophysics this week pointed to a star system not far from ours that plays host to three "super-Earths" (planets with a mass larger than our home planet, but lighter than gas giants, such as Saturn and Neptune), including one made of molten rock. Although they're technically too far for human exploration, scientific measurements have already allowed us to discover some amazing facts. So, what do we know about the nearby super-Earths?

Researchers from the Roque de los Muchachos Observatory in the Canary Islands this month discovered a K-dwarf star — stars with around half the mass of our own sun — in the constellation Cassiopeia with three planetary bodies orbiting it. A closer examination of the star system revealed that at least one of those planets was a candidate for increased exploration.

"Transiting exoplanets are worth their weight in gold because they can be extensively characterized," said NASA's Michael Werner, lead project scientist for the Jet Propulsion Laboratory's Spitzer Space Telescope mission in Pasadena, Calif., in a statement on Thursday. "This exoplanet will be one of the most studied for decades to come."

The star itself, HD 219134, is of special significance because, as a main sequence K dwarf, its longevity is closer to 15 or 30 billion years — much longer than our sun, which will likely clock out at around 10 billion years. That means that the orbiting planets have even more precious time to evolve.

Study author Ati Motalebi of the Geneva Observatory in Switzerland is eager to use even more advanced technology to "explore" the surrounding super-Earths.

"[The upcoming James Webb Space Telescope] and future large, ground-based observatories are sure to point at it and examine it in detail," Motalebi said in a statement to reporters on Thursday.

The most promising of the three super-Earths has lovingly been dubbed HD 219134b and was discovered as it passed in front of its host star, dimming the observed light and signaling to astronomers that there was something there worth investigating. After measuring its relative distance, Motalebi and her colleagues realized the exciting possibilities before them.

"Most of the known planets are hundreds of light-years away," explained study co-author Lars A. Buchhave of the Harvard-Smithsonian Center for Astrophysics in Cambridge, Mass., in comments to the press this week. "This one is practically a next-door neighbor." He noted that the closest known exoplanet to date, GJ674b, is around 14.8 light years from Earth, although much of its composition and makeup is largely unknown to the scientists who discovered it.

HD 219134b, however, is less of a mystery. So far, using the Spitzer Telescope data, Motalebi and her team have predicted that the planet is covered in jutting land formations, volcanoes, and molten rock — similar to our own Earth some 4.5 billion years ago. If you were planning on traveling there, you might want to reconsider: according to researchers, surface temperatures are blistering.

The exoplanet is about 1.6 times the size of our home planet, confirmed NASA, and has two similar siblings in orbit with it around the host flare-star, which is so bright, it can be seen with the naked eye.

It's been an exciting month for planetary scientists and astronomers seeking life outside our own solar system; just last week, NASA scientists announced the discovery of another exoplanet, Kepler 452b, with the potential for exploration — and possibly even extraterrestrial life.

"What you really want to know is what [fraction] of planets could be habitable," said Seth Shostak, senior astronomer with the SETI Institute, which studies extraterrestrial intelligence, in a statement on Friday. Shostak added that it was possible that one out of every five planets discovered outside our solar system had the potential for life. "There could be tens of billions of such worlds in the galaxy," he said.