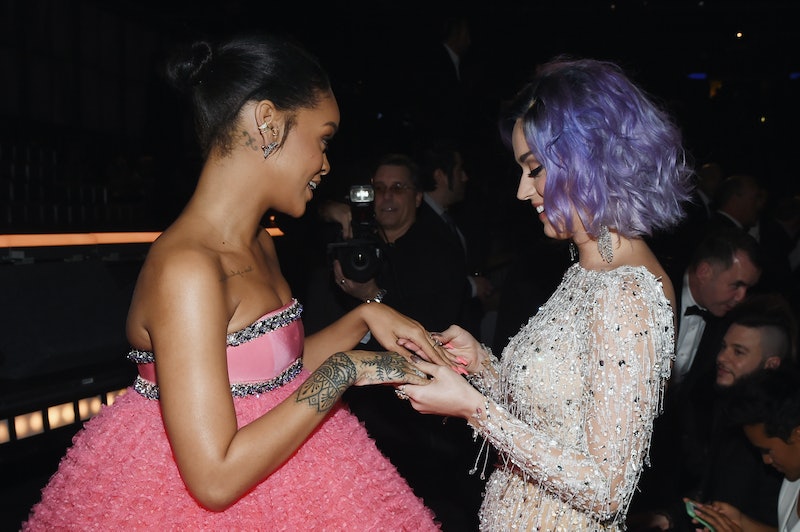 Taylor Swift isn't the only pop star in town with famous besties. Her supposed rival Katy Perry (who allegedly inspired the song "Bad Blood") has her own loyal BFF in superstar Rihanna. But how did Katy Perry and Rihanna meet and become the inseparable duo they are today? According to Elle Magazine, the story of these two besties began with a gorgeous purse and ever since then, the two pop sensations have had each other's back — enough for rumors to be swirling that Rihanna is taking Perry's side in her supposed feud with Swift and writing a diss track about Tay-Tay.

How it all began: Perry told Elle that back in 2009, she complimented Rihanna's studded Valentino bag and the "Bitch Better Have My Money" singer offered to send her one as well. The "Firework" singer thought that was just an empty promise, but then Rihanna stayed true to her word and sent over the bag as a gift. "Valentine’s Day came around, and I got a little Valentino bag in the mail from her," Perry told the magazine. "I thought, ‘Wow this is a woman of her word.'"

Rihanna had equally complimentary words to say about Perry. "I’ll tell you, you do not find people like her in this industry," she told Elle. "She’s gorgeous, charming and so unedited it’s scary. That’s what intrigued me most when I first met her: she said it like she saw it. I trust people like that."

And thus a best-friendship was born. Rihanna threw Perry a bachelorette party before her wedding to Russell Brand. Perry drew RiRi a suggestive drawing for her birthday earlier this year. They're both good pals with Nicki Minaj. They whispered about jewelry (and maybe more) at the Grammys. But even Ri and Katy have had their rough patches — the ladies had a brief falling out in 2013 when Rihanna allegedly returned to ex-boyfriend Chris Brown, of whom Perry is not a fan. "I love her [Rihanna] and every time I see her, I’m reminded of the light that she has. There’s a lot of dark in this business," Perry told Elle U.K. in 2013. "I know a lot of people out there with the most detrimental entourages — they are the root of their demise. It’s really unfortunate but you can’t save these people. My days of celebrity saving are over."

But since then, Perry and Rihanna are back to being besties, and as Perry's recent support for her friend over the VMAs shows, the duo's bond is stronger and better than ever.