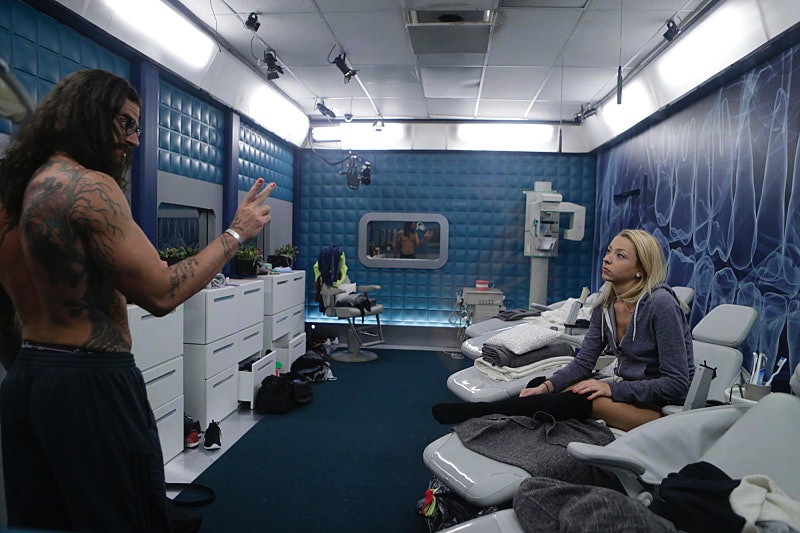 Things got even more complicated among the weird threesome of Julia, Liz, and Austin in the Big Brother 17 house last week. As part of some sort of half-baked "insurance policy" plan, Austin not only revealed to Jason that Liz has a twin named Julia but that he also hopes to not have Julia in the house too long so that he can spend some quality time with Liz. Of course, Jason blabbed, and this info eventually made its way to Julia and Liz, who were not thrilled about Austin's revelation. Now that Julia has officially joined Liz and the other houseguests in the game, her first order of business was confronting Austin about his comments during Sunday night's episode, and watching it go down totally made me feel pretty gross.

That's because Austin totally backtracked on everything he said, as he's been doing with all of his fellow Sixth Sensers since he's been called out for his actions. And I can't blame the guy for doing this. You don't win Big Brother by being honest, after all. This game is all about lie, lie, lie and pin it on someone else so you don't get caught. You do whatever you can to advance your own game, and if you have to go back on your word or make it look like you didn't do something that you actually did, so be it.

So in response to Julia deeming Austin "shady," he admitted that he said too much to Jason and that he immediately regretted telling him her name. Austin said he never insinuated that he wanted to get one or both of the twins out.

But Julia's pretty savvy, so of course she wasn't buying it. Before Austin even came into the room, Julia was already trying to turn Liz against Austin, attempting to convince her twin how untrustworthy and detrimental he will be to their game. It also can't feel too great when the dude has made his ride-or-die feelings for your sister pretty explicit, but he doesn't share the same final two sentiment for you.

So Julia just nodded her head and tried to make Austin feel relieved during their discussion, which totally didn't work because he then went to Shelli and Clay and asked them to talk some sense into Julia. But since they were considering throwing Austin and/or the twins under the bus, they didn't seem so concerned about smoothing this little family drama over.

Oh what a tangled, twinny web we weave.

More like this
What You Need To Know About Applying For ‘Big Brother’ 2023
By Sam Ramsden
This 'Big Brother' Legend Is Tipped To Host The ITV2 Reboot
By El Hunt, Maxine Harrison and Sam Ramsden
Kylie Jenner Was Almost Named After *Another* Iconic American Family
By Grace Wehniainen
Every 'RuPaul's Secret Celebrity Drag Race' Contestant Revealed So Far
By Brad Witter
Get Even More From Bustle — Sign Up For The Newsletter