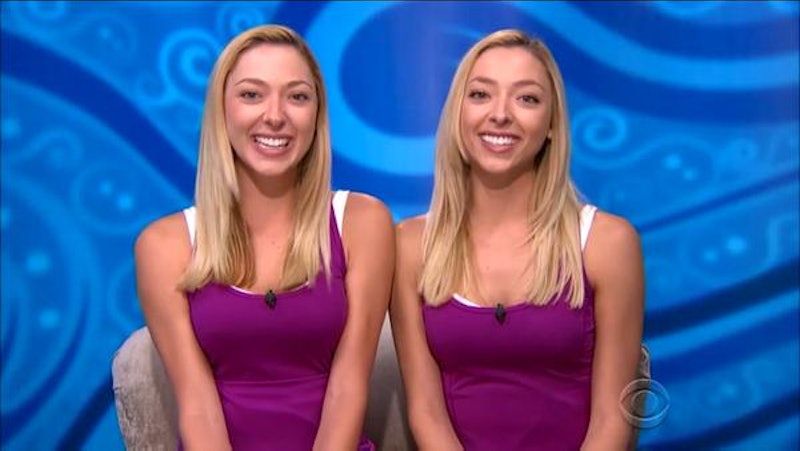 Wow. It was an emotional roller coaster for those of us who are obsessed with Twin Twist on Big Brother 17 during Thursday's live eviction. During the week, Da'Vonne — the second houseguest to be evicted — figured out that Liz was actually Liz and Julia. News traveled fast, and before you knew it, Clay is doing tuck jumps in front of the memory wall as people are freaking out about the twins. But, then, something changes. Liz/Julia's allies Austin and Vanessa both win HOH, and that could be a huge saving grace for the twins for a week. So, Team Twins, celebrate accordingly, because it seems like the the twins are safe for the week.

Things in the Big Brother house change quickly, it's the name of the game. Case and point, Da'Vonne is no longer a houseguest in the game and wasn't even a target last week. So, anything can happen, but it appears that Liz and Julia are on the power side of the house as of now. With Austin and Vanessa in power, the two will (hopefully) keep Liz and Julia safe because if they can help them get to Week 5, they'll have one new alliance member to add to their group.

Vanessa is one of the few people in the house that not only knows the truth about the twins, but Julia has even introduced herself to her. Austin is a close friend of Liz in the house and kept her safe from being nominated this current week as a pawn.

So, the new alliance that stands is: Clay, Shelli, Austin, Vanessa, and Liz/Julia. Clay and Shelli could not have made that alliance at a better time since they were probably headed for the block after their reign during Week 2. The person that needs to watch out is Audrey. Her name has been tossed around a few times since Day was sure to walk out that door, and honestly, her rogue voting is so hard to predict, it might be best for the game. Jeff should also watch out, since Austin is worried Jeff is coming after him. But, this time at least, it looks like the twins are safe.