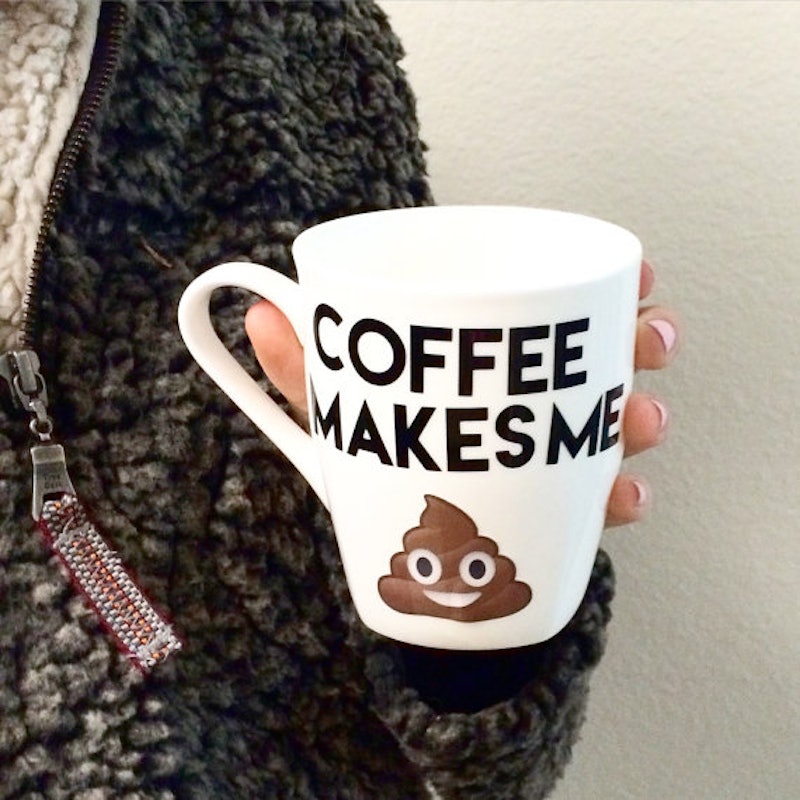 Coffee can do many things for our bodies. Lots of them are pretty amazing, but others are kind of… odd. For example, why does coffee make us poop? Seriously — it's a question that absolutely needs answering. Discovery News is on it, though, with a video that explains exactly what it is about coffee that kicks your poop mechanism into high gear. And you guys? It's actually… kind of adorable.

I know, I know — “adorable” isn't typically a word most of us would use to describe poop, but it's actually pretty apt in this case. Stylistically, the video is part old-fashioned school science video — y'know, the kind of educational film from the '50s scored with a cheerful orchestral soundtrack heavy on the strings — and part “let's all go to the lobby” animation, with an anthropomorphized (and somewhat exhausted-looking) cup of coffee hanging out with a sentient poo that's a heck of a lot cuter than Mr. Hanky. The result is unexpectedly charming, and it's informative to boot. Everyone wins! Or… something!

Is 10 a.m. on a Monday morning too early or soon to be dealing with poop? Maybe — but at the same time, I would also argue that this is all need-to-know information. Here's the general gist of it all in five pictures; scroll down to watch the full video.

1. It All Starts With the Colon

Coffee stimulates movement in the colon, although we don't totally know why. We think it has something to do with the way it interacts with the lining of the stomach and small intestine.

2. Gastrin Also Has Something To Do With It

Gastrin is a hormone that is known to activate the colon, and since the nearest exit to the colon is your butt… well, you do the math.

Apparently coffee's best buddy can show up as soon as four minutes after you drink your first cup of joe of the day. Plan your morning accordingly…

...If you're one of the 23 percent of coffee drinkers for whom this whole thing is true — because although coffee and poop are best friends for some people, it's not the case for all people. Why? It seems to vary depending on things like your sensitivity to caffeine and your daily habits. The coffee-poop relationship is also more likely to happen if you're a woman, so consider yourselves warned, ladies.