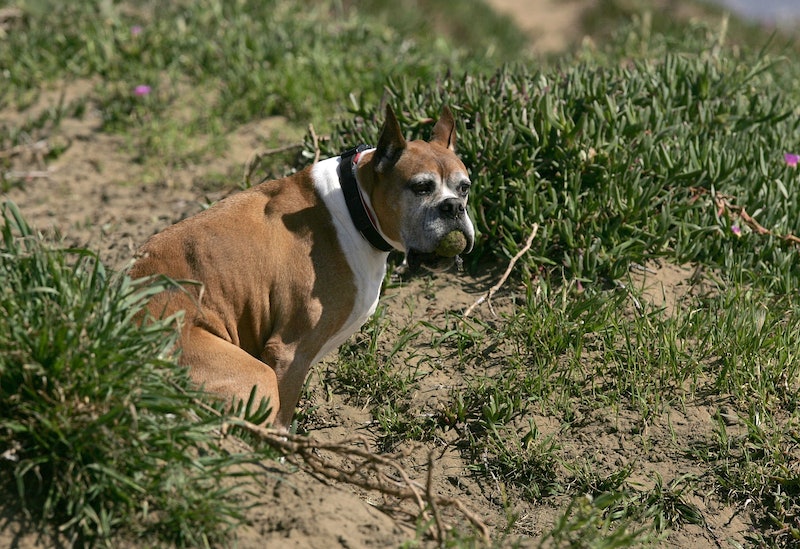 Everybody does it. That part you hopefully already knew. News has gotten fairly poopy as of late: Suddenly, companies are offering dollars in exchange for your actual feces (which, apparently, is something that Justin Timberlake is somehow involved in); Channing Tatum has thoughts and facial expressions on it in regards to fatherhood; There's a push to strip the stigma of going number two at the office. Basically, we're talking about poop a lot lately. Let's keep up the strong start on learning more about defecation. What does it mean as a whole? To you? To po(o)p culture? To science? To your pet?

It's certainly important to know the ins and outs of your own poop. Different colors and consistencies mean different things. Your diet and stress levels impact these variances, among other external factors that go internal. Learn its trends and what it means about both your physical and psychological health. It's always important to be in touch with your body and your poop is no exception. But let's discuss how poop transcends that. It's weird how much poop permeates our daily lives—both literally (sorry) and through its influence. It plays a part in marking new, forward strides in romantic relationships. Sometimes it comes with a hefty price-tag. Here are some surprising fact you never knew you never knew about poop.

We are biologically-wired to be grossed out by it

It's not just immaturity. The smell stems mostly from all bacteria in poop, so it's survival instincts telling you to find it averse.

Your child's poop smells less bad to you than other poop

There's no medical explanation of this phenomenon, but many scientists agree it's a fact that remains true for most parents. Perhaps another biological wiring job?

Listen, I thought we went over the whole everybody does it thing, you guys. Regardless, studies show a majority of women won't even fart in front of their partners until at least 7.5 months into the relationship. Not sure what magic value seven-and-a-half months holds for that, but OK. Also, how could we forget when that dude called out his girlfriend for pooping with a sweet note? Oh, swoon.

One guy in Ireland attempted alchemy with his

It did not work.

As our old friend the guy in Ireland attempting alchemy with his learned firsthand. Homie was charged with arson and endangering other lives when he sustained over $4,000 in damages to his apartment while "experimenting."

There are pills that make your poop gold

Yes, pills exist that allow you to poop golden and glittering poops. Do they work? Do you have a disposable $425? Let us know. (And let Ireland guy know, too.)

Although the original meaning of the popular curse word is still a little foggy, it's definitely been in spoken circulation since the 14th century at least.

There is a candy called "flamingo poop"

Here it is and it is pink. Obviously upsetting, pink flamingo poop doesn't even begin to scratch the surface of poop-themed candies which include: cat poop fudge (DIY recipe here, because hey, I don't know your life), ghost poop, and Cape Cod seagull poop (for the poop candy elitist in your life, maybe).

Traditional Western toilets obviously can't function the same in space, so what do these celestial cowboys do instead when nature calls? They poop in bags. And those bags go into space. Sometimes, the poop bags catch on fire and shoot across the sky and we don't know what's happening but make a wish anyway.

There is astronaut poop on the moon

When Apollo 11 and that whole squad touched down on the majestic lunar surface, they obviously had to make room for souvenirs (namely, moon rocks aplenty). Some speculate about 100 pounds of poop, pee, and vomit is up there.

Dogs eat their own and their friends' poop...kinda a lot

It's called coprophagia and it's super disgusting. Most dogs outgrow this habit as they outgrow puppyhood. When it happens out in nature with other animals, it often reflects a malnutrition the animals seeks to remedy with nutrients found in others' scat.

There are a seemingly endless number of fetishes associated with it

Yep—coprophagia can and sometimes does transcend the puppy phase and enter adult human sexualities. Also called coprophilia, the associated kinks range from defecating on a partner's chest to directly into an orifice including mouths. Hi, hope you weren't eating lunch just now.

Women used to actually shove the stuff up their hoo-has kinda like a horrible, horrible iteration of a diaphragm before sex to prevent pregnancy. Holy UTI, dude.

Petrified poop passes as a gemstone

One that is apparently moderately popular on Etsy. It varies from tawny to reddish in hue and often looks marbleized. BUT WE KNOW THE TRUTH.

Last year, a buyer shelled out major bucks for what was supposed to be a 6 million-year-old poop. The kicker? It possibly wasn't even authentic.

Sloths perform a "poop dance" before their weekly dump

It's true and kinda adorable.

A spoonful helps—well, you know.

In Hawaii, parrotfish are responsible for keeping the beaches all sugar-sanded. Except that is very much not sugar. Nope, it's their poop. The fish eat coral but don't have stomachs so their digestive systems automatically pass all food particles and blast 'em through the backdoor as sand. Cool related fact: Bigger parrotfish pass about 840 pounds of (shit-)sand annually. Surf's up!