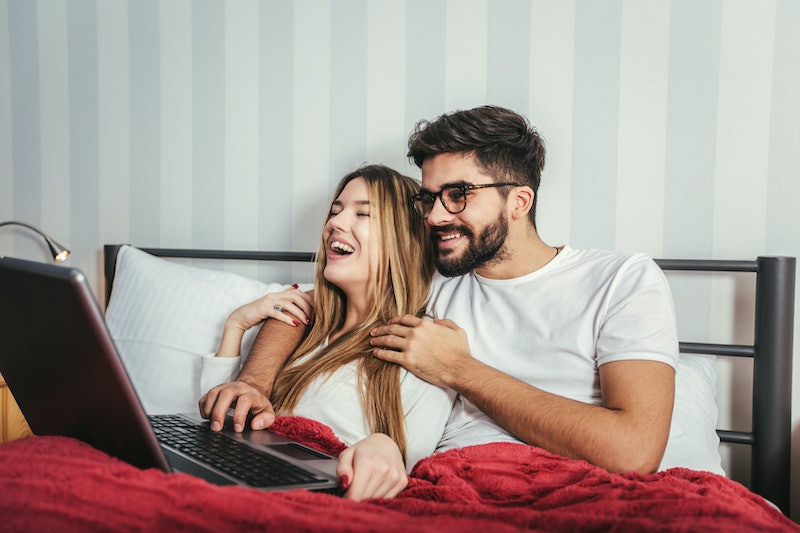 "So... want to go watch Netflix?" Most Millennials know that, in a romantic context, this question is usually code for something more R-rated than Doctor Who. And though I'm unfamiliar with the invitation to "chill" — perhaps because I can't picture myself dating someone who uses that word in the first place — "Netflix" and "chill" are a mischievous combination, according to the hilarious new "Netflix and chill" meme. The GIFs, still images, and social media posts plastered with this phrase spell out what we knew all along: that when we ask a date to watch a movie or television show in the privacy of our rooms, we're looking to take that relationship to the next level, if you know what I mean.

Just to be clear, if someone goes home with someone else for Netflix viewing and chilling and does not want to hook up with them, that's completely acceptable as well; indeed, someone agreeing to a "Netflix and chill" session doesn't by default mean they're up for anything besides literally watching Netflix and chilling out (as is the case with... well, pretty much everything, consent is key). But if there's mutual interest, chances are the two parties will be inching closer and closer to each other on the couch and the show will become an unconventional soundtrack to their rendezvous.

The meme says it better than I could, though, so heed its warning: When someone asks you to watch Netflix and chill, they probably really mean one of these 10 things.

1. They'll give it an episode or two before pulling out this move:

2. They plan to pursue an activity unfit to name in public.

3. They're fantasizing that you're one of the characters on the screen.

4. Their pillow is the true object of their affections.

5. They're ready to start a family.

6. They want to do it like it's done on the Discovery Channel.

7. They don't know what the phrase means and need this 10-year-old to explain it to them.

9. They're sincerely just dying to find out who the last drag queen standing is.

You guys, I think I might have just created the next Netflix-themed innuendo there.

More like this
Nicola Coughlan Shared A Lady Whistledown Excerpt From ‘Bridgerton’ Season 3
By Grace Wehniainen, Alyssa Lapid and Sam Ramsden
10 Stranger Things-Inspired Halloween Costumes For True Fans
By Emma Carey
6 'Game Of Thrones' Halloween Costumes That Aren't Overdone
By Nina Kahn
These 25 International Horror Movies On Netflix Prove Fear Is A Universal Language
By Bustle Editors
Get Even More From Bustle — Sign Up For The Newsletter