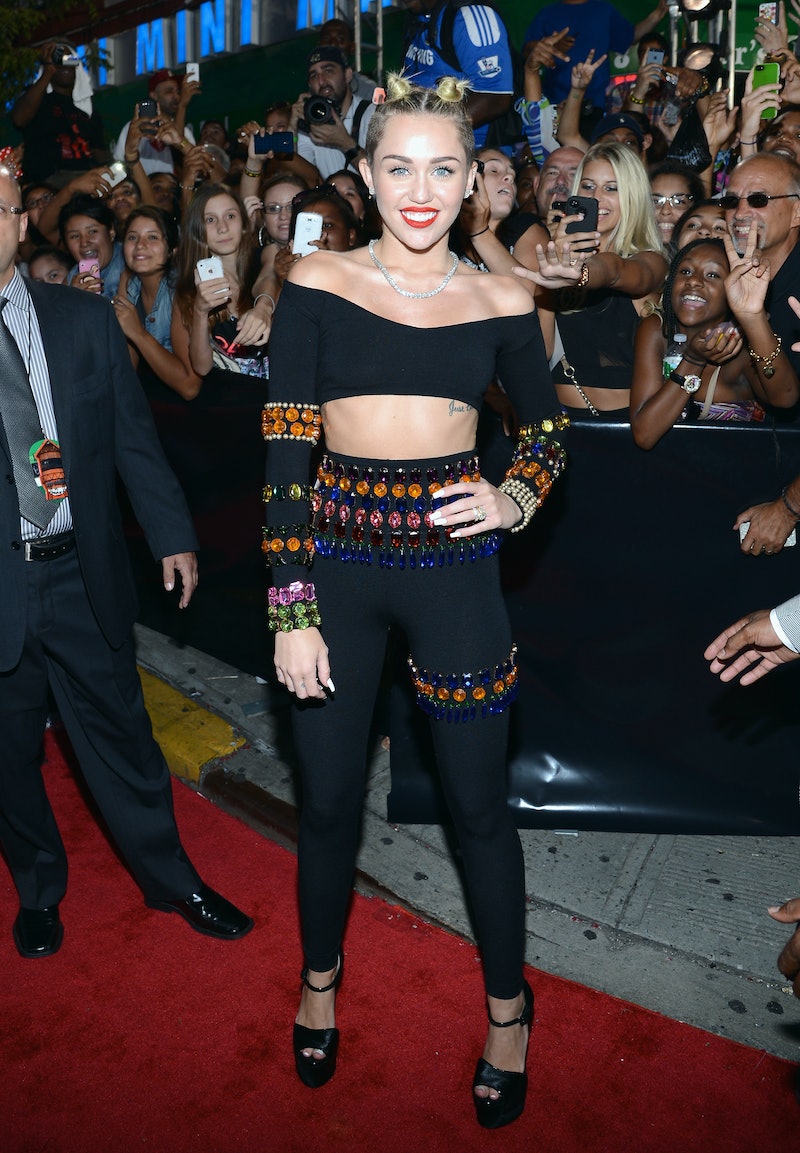 I might be a huge fangirl, but even I can't get down with one Harry Styles hair 'do. Double manbuns are receiving the nod of approval, however, from Miley Cyrus, who loves Styles' space buns. And her public declaration of affection is the greatest thing I've seen all day.

When my favorite One Direction-er started rocking the man bun, I cringed a little, but I let it slide. He's Harry, he can do no wrong. But then some fans doubled the love and photoshopped him rocking two, Zenon-style space buns on top of his head, which is cute and all, but only because it's not real, IMHO. (Phew!)

And I'm not the only one who is none-too-fond of the wack-a-doo 'do. One Direction's hair dresser, Lou Teasdale, tweeted: "The space buns thing. I don't get it." But there's one person who does, and she's been known to rock a double bun herself, every now and again: Miley Cyrus.

Cyrus posted a collage of photoshopped shots of Harry rocking the space buns with the headline "HARRY WITH SPACE BUNS I'M SO IN LOVE", and captioned it "pretty much." And then Harry "liked" the photo, so it's just adorable on every level.

Though Harry's buns aren't real, there are a few celebrities who do rock space buns in real life.

The queen of the space buns.

They even have the Kardashian/Jenner seal of approval.

Her No Doubt space buns were a '90s classic.

More like this
Harry Styles Brought Nipples & Sequins To The Grammys
By El Hunt
5 Wild Theories About Miley Cyrus’ “Flowers” Music Video
By Jake Viswanath
Harry Styles Has Become An Accidental Vinted Model
By El Hunt
Harry Styles Just Split His Pants In Jennifer Aniston’s Face
By Sam Ramsden
Get Even More From Bustle — Sign Up For The Newsletter
From hair trends to relationship advice, our daily newsletter has everything you need to sound like a person who’s on TikTok, even if you aren’t.