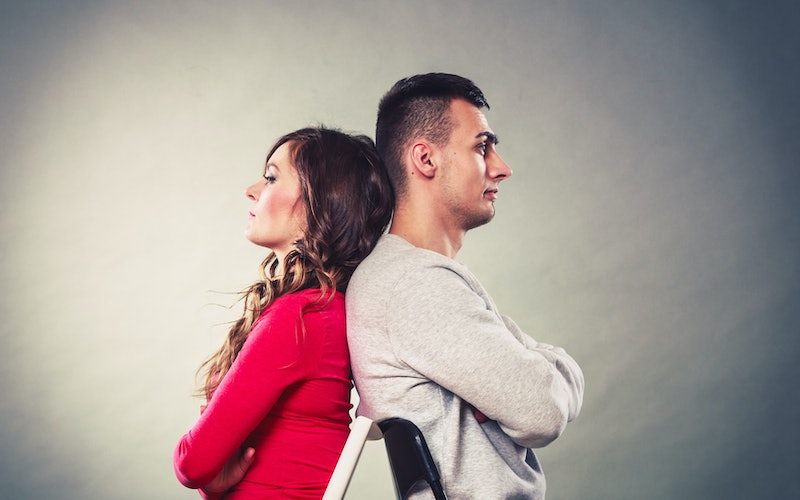 All couples fights. It’s just the way it is. You can’t spend that much time with a person and not fight, and if you can, then it’s probably a sign that something is wrong; very wrong. But arguing is a healthy in relationships. It's a way to express your concerns or issues within the relationship, instead of just letting it all boil up and over. To not fight, from time to time, is a total disservice to your relationship. It’s also unfair to you.

But when things get heated and an argument ensues, it’s hard to remain cool. When you’re pissed off and you feel like your head is going to explode from stress and frustration, your immediate reaction might be to go for the jugular and just lay into your partner with words you didn’t even know you were capable of saying. And to be honest, when you’re that angry, it can feel good to be mean as hell, but you shouldn’t give into it. If you're going to have an adult relationship, it means you need to act like an adult, too.

The first step in having a healthy fight with your partner is to keep things above the belt and as void of hate as possible. Once you can manage that, then you're halfway there.

Here are 11 things you should never speak during an argument.

Well, there's no need to get personal! Insulting someone's inability to make you have an orgasm, whether it's true or not, is just straight up cruelty. If it's true (and I'm sorry to hear that), then it's even worst. An argument is no place to start making your partner feel like they're less than adequate in bed, especially if you're fighting over something completely unrelated.

Once you say this doozy, you're not just bringing a third party's opinion into the mix, but you're going after your partner's character. One of the big ways to keep your fighting civil and productive is to tackle the topic, not each other.

Some things, once they're said, can't be unsaid. The problem with declaring that you want to breakup or get a divorce is that even after the fight is resolved that sentence is out there lingering between you and your partner. You may have felt that way for a split second during your argument, but it should never, ever be uttered.

"Why do you hate me?" is on par with "Are you mad at me?" ― they're both juvenile ways to make a disagreement all about you. Here's an enlightening fact: If someone hated you, they would have been long gone before the fight. People don't stick around and fight, if they hate someone.

According to Dr. Gail Gross, healthy fighting is all about empathy and comparing your current partner to your ex is anything but empathetic. You're not only bringing up your past, but bringing up someone they might already have some insecurities about.

Similarly to telling your partner what someone else thinks of them, accusing them of changing is also attacking their character. People change, people evolve, and depending on how long you've been with your partner and what has gone on in their life, they could be a different person than the one you first met. But even if that's true, an argument over bills or whose turn it is to take out the trash, isn't the ideal time to bring that up.

To say "I don't care" during an argument is like saying "I'm fine," when you're clearly not. You do care or else you wouldn't be arguing in the first place, and saying otherwise shuts down the conversation and doesn't allow for a resolution.

The use of the word "always" implies fault and that your partner can't learn from their mistakes. Even if that may be the case, Dr. Gross advises against keeping score as to who did what this time, last time, and the times to come. You're just setting yourself up to hold grudges longer than you should.

Really? Nope. This one should always, always be avoided at all costs.

As Americans, we overuse the word "whatever" to a degree that is insane. It's also, according to a 2009 survey, the most hated word that we say as a culture. It not only dumbs you down, but shuts down the conversation and relays to your partner that you really have zero interest in fixing the issue. If you want to sleep soundly tonight, then you want to resolve this problem and saying "whatever" will do the exact opposite.

No one likes to be called crazy, so it's never something that should be said. It's also accusatory and attacks your partner. Sure, they get out of line sometimes, but chances are so do you ― and that's why when you're not fighting, you and your partner go together like peanut butter and jelly.

More like this
The Best Time To Date After A Breakup, According To Experts
By Bustle Editors
20 Things You Should Never Tolerate In A Relationship
By Rachel Sanoff and Kathleen Ferraro
12 Ways You're Sabotaging Your Love Life
By Teresa Newsome and Lexi Inks
Your Daily Horoscope For August 16, 2022
By Alexandria Lettman
Get Even More From Bustle — Sign Up For The Newsletter