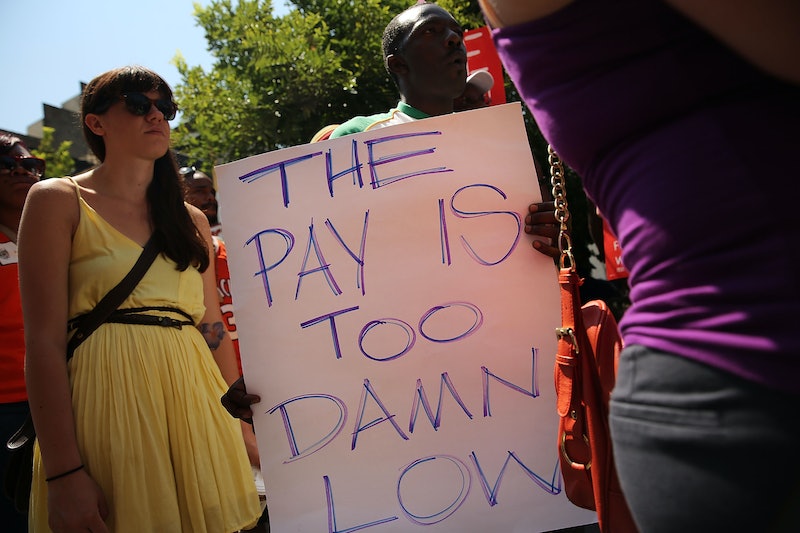 Just in time for holiday road travel, fast-food workers across the United States are striking in an effort to raise the minimum wage raise from $7.25 to $15. The strikes are expected to last for 24 hours, and started as walkouts in Raleigh, Chicago, New York, Washington, D.C., and Pittsburgh. Organizers are hoping the strikes spread to 100 cities across the nation.

The strikes come as President Obama said Wednesday that he'll back a Senate proposal to raise the minimum wage to $10.10. (Obama had previously said in statement in February that it needed to be at least $9.) Even though $10.10 isn't quite what the strikers might have hoped for, pretty much any increase would be better than the $15,000 a full-time minimum wage-paid worker lives on per year.

Fast-food workers have been staging large walkouts since August — to little success. This, despite the fact that McDonald's told its workers to go on food stamps and Medicaid, and even informed employees that cutting their food into many pieces will help them feel fuller.

The big problem with these kinds of pay gaps is that they literally don't help anyone: A CEO can only spend so much, while the workers flipping burgers can't even afford the food they prepare. In the meantime, the CEO's paycheck just sits in the bank collecting interest.

On the bright side, SeaTac, a little town in Washington, just passed the nation's highest minimum-wage law. Workers there will now earn the $15 an hour fast food strikers are demanding. It's America's first "living wage" — a practice widespread in Britain that goes a bit further than a minimum wage. While the minimum wage is legally enforceable, the living wage is the amount an individual needs to genuinely cover the basic costs of life without struggle (but with much careful budgeting).

With a Senate vote on the minimum wage bill expected for by the end of the month, maybe fast food employees will have something to celebrate this holiday season after all.