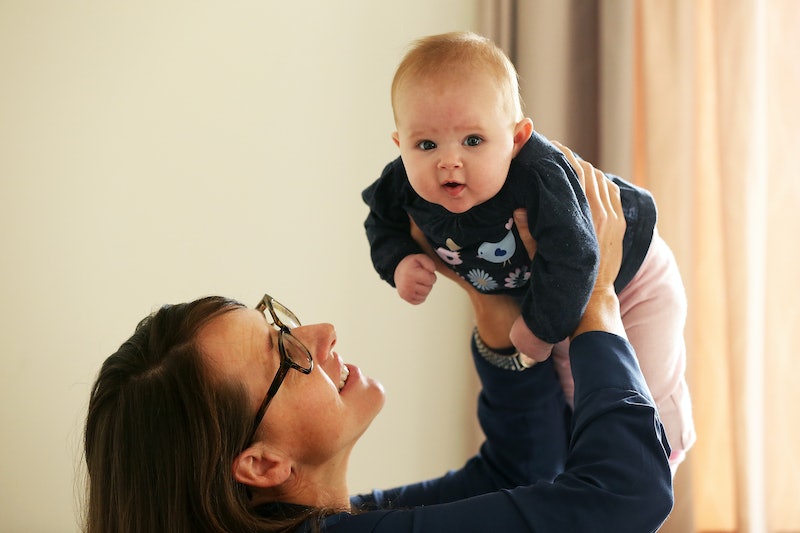 So you’re at a party, and someone says something ignorant. And while you know that they’re in the wrong, and that you could totally engage them and win if you were a bit more prepared, your words escape you. To make sure that doesn’t happen, we’ve compiled a series of handy reference guides with the most common arguments — and your counter-arguments — for all of the hot-button issues of the day. This week's topic: Why The U.S. Should Have Paid Maternity Leave.

Common Argument #1: We already have the Family and Medical Leave Act, why do we need anything else?

Your Response: The FMLA is great in that when workers have to leave for medical or family reasons, they can come back to work without fear of losing their job. The act can provide a buffer of up to 12 weeks and also makes men eligible for paternity leave. But what's not great about the FMLA is that the time off is entirely unpaid, and it only covers up to 59 percent of workers because the requirements for eligibility are so strict. Many women in lower paying jobs don't qualify for it. Not to mention that America is the only industrialized country that has unpaid maternity leave. Along with Swaziland, Lesotho, and Papua New Guinea, we're one of the only countries that allows new mothers to go unpaid.

Common Argument #2: Maternity leave is a huge burden to a woman's employer. Why should the company pay extended absences for workers who aren't contributing?

Your Response: The imposed burden on companies is kind of blown out of proportion. When the U.S. Navy recently began offering 18 weeks of maternity leave for sailors, it recognized that women who have maternity leave are more likely to return to work after their child's birth. Which means companies don't have to waste money and energy finding replacement workers. In addition, in 2011, California's Center For Economic and Policy Research found that 91 percent of businesses with paid leave policies reported positive benefits or no effect. So there's really nothing to lose.

Common Argument #3: Becoming a mother is a choice, so why should others have to pay for your choice?

Your Response: It's true, motherhood is often a choice. But it's a choice that aids in the continuation of society. When you view motherhood as a choice and refuse paid maternity leave as a result, you're directly disenfranchising single mothers or lower income parents who can't afford to take unpaid time off from work in order to have children, which means some women are forced to choose between having children, working full time, or leaving work and putting a financial strain on their family. Many women can't afford to do so, which effectively robs them of their choice. How would you feel if you had to choose between having a job or having a family?

Common Argument #4: But it's really unfair to men who have children, or other women in the workplace who choose not to have kids.

Your Response: Paid maternity leave is unfair to fathers, which is why many countries have "parental leave" and allow both mothers and fathers paid time off from their jobs in order to take care of and bond with their new baby. But the U.S. system is more unfair for fathers who have new children, as they often aren't able to have any time to spend with their family. In addition, if the mother has to go unpaid, that adds additional, unnecessary financial stress to the father or partner, who is now the sole breadwinner. And let's not forget single fathers, who are often ignored in maternity leave conversations. In companies who do offer paternity leave, up to 26 percent of men take advantage of it.

Your Response: At first glance, this might seem like a logical argument; if a woman wants an employer to pay for her maternity leave, she should agree to a lower salary. But it's incorrect on several levels. First off, the 12 to 18 weeks that a woman is gone does not affect her performance and worth. The wage gap effectively says that a woman is not valued as highly as a man is in the workplace because she is not equally compensated for the same work. Pitting a woman's choice to have children against her workplace value isn't right. In addition, the current unpaid maternity leave process already does a lot to widen the wage gap. Currently, experts estimate that with every child a woman has, her wage goes down by 4 percent. On the flip side, fatherhood can cause a man's salary to increase by 6 percent.

Common Argument #6: Why can't you leave this for individual companies or states to work out? Why does it have to be mandated?

Your Response: Some states such as California do have mandated maternity leave laws. Large tech companies housed in California, like Google and Facebook, have wonderful parental leave options, which is probably a big reason why they're often highly rated by their employees. In addition, this is an issue that affects both men and women across the nation. Half of the workforce is female, but, according to the Department of Labor, only 12 percent of women have paid maternity leave. The lack of maternity leave stigmatizes female workers and mothers and makes them less desirable hires, which does nothing but propel our nation backwards, away from progress.

More like this
Black Women's Equal Pay Day Highlights An Upsetting Problem
By Brandi Neal
Women Around The World Are Cutting Their Hair In Solidarity With Mahsa Amini
By Darshita Goyal
Chris Kaba's Family Continue Fight For Justice After Viewing Police Bodycam Footage
By Sophie McEvoy
Where Is Former Bachelor Host Chris Harrison Now & What Is His Net Worth?
By Hugh McIntyre
Get Even More From Bustle — Sign Up For The Newsletter