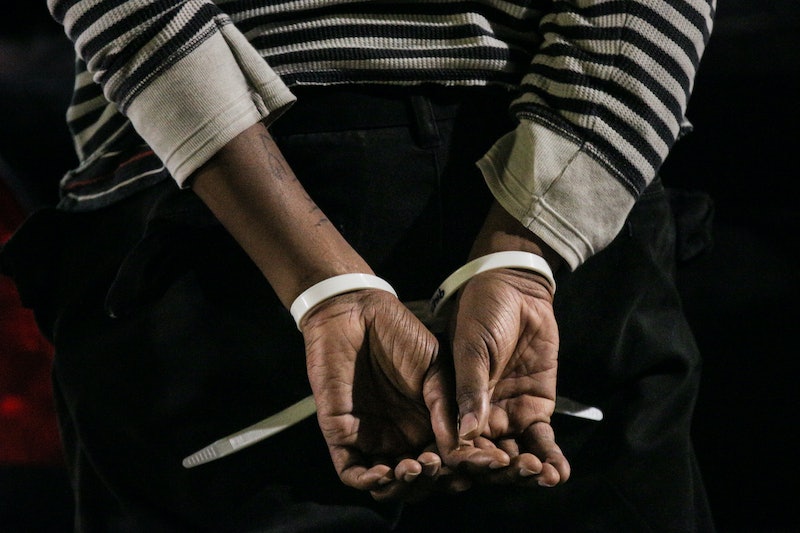 So you’re at a party, and someone says something ignorant . And while you know that they’re in the wrong, and that you could totally engage them and win if you were a bit more prepared, your words escape you. To make sure that doesn’t happen, we’ve compiled a series of handy reference guides with the most common arguments — and your counter-arguments — for all of the hot-button issues of the day. This week’s topic: How to argue that white privilege exists.

Common Argument #1: I grew up poor, and I've had plenty of struggles. I never felt privileged.

Your Response: Sometimes, when a person is confronted with white privilege, they hear it as "you're a privileged white person." This is an easy mistake to make, but it's a crucial misinterpretation. White privilege doesn't entail that you've necessarily lived a life of luxury and serenity — that would more accurately be a conversation about class privilege. White privilege, rather, is about the benefits and boosts, obvious and opaque, that society affords you simply as a function of your whiteness.

Common Argument #2: I have several black friends who're better off than me.

White privilege is about the things that no single person can change about how society views race — not a person of color, nor a well-meaning white person. Look at it this way: your black friend might have their dream job, earn twice your annual income, have a spouse, children, and a lavish home. But that doesn't mean they won't be eyed warily when out walking at night, because those kinds of prejudices aren't about context, they're about color. They're more privileged than you in countless ways, sure, but white privilege is one thing you have that they never will.

Common Argument #3: But I live my life by the principles of equality and non-racism.

Your Response: Good intentions, while appreciated, can't in and of themselves overcome a 200+ year American history of anti-black racism, to say nothing of racism against Asian, Latino, and other populations. Just because I'm a liberal, anti-racist white man doesn't mean I'm not reaping the benefits of white privilege. Both the ones that exist as present, modern-day phenomenons — like a job application being more likely overlooked if it has a "black" name attached — and the ones that are rooted in our nation's history of slavery.

Your Response: But the leg-up persists. Even setting aside the incredible boost early America received from millions of entirely unpaid, uncared for slaves — and those back wages are still unpaid, by the way — consider what decades of enslavement and subsequent racist oppression means for a community. Basically, to use a popular metaphor, you got a head-start in a race, and you've been leading for years, while black Americans are trying to catch up with their shoelaces tied together. That's why programs like affirmative action exist, and moreover, why they're a moral necessity.

Common Argument #5: I tried asking a black friend to explain privilege to me once, and they seemed annoyed. It was a real turn-off.

Your Response: While I definitely can't speak definitively for people of color, I will say this: I've seen many socially conscious black activists and users on social media voice fatigue with how frequently they're viewed as an information desk for curious white people, expected to talk about painful racial inequities whenever called upon.

I'm certainly not denying that it's nice to give somebody a warm reception when they express a desire to learn, but here's the thing: there are plenty of ways to learn about white privilege without asking the person who lacks it to explain it to you. For starters, you can hit up the ol' search engine and see what you turn up. If you looking for a start, Peggy McIntosh's "White Privilege: Unpacking the Invisible Backpack" is an oft-cited and very informative read.

Common Argument #6: Look, we're all on the same side here, so it hurts for you to be calling me racist.

Your Response: First of all, when somebody says you have white privilege, they aren't calling you a racist. Rather, they're saying that you benefit from societal and historical racism. It's why I can get pulled over and escape a ticket with a polite smile and an earnest-sounding apology. It's why I can smoke marijuana, in public even, with little fear of reprisal. It's why I don't have to worry about people assuming, without having truly met me, that I'm angry, lazy, threatening, or a criminal malcontent. That doesn't mean I'm a racist, it just means that I'm awash in the same, centuries-old systems of white supremacy as everyone else. The only way to really get this one wrong is to deny that white privilege exists.

About the hurt feelings, though — you should consider how painful and/or exhausting it is for people of color to be asked to explain privilege, and to so often get defensiveness and bitterness when they make the effort. I've never seen this illustrated more vividly than during a painfully awkward recent interview between Imani Gandy (of RH Reality Check and This Week In Blackness) and left-wing radio host Nicole Sandler — a simple attempt at an adult conversation about white privilege, ostensibly with a progressive ally, that descended into sneering, hurt feelings and willful ignorance in a flash. In short, just because you might feel uncomfortable with your own privilege doesn't mean it doesn't exist.

Common Argument #7: Well, what do you want me to do? I can't change any of this.

Your Response: This is the good part! The answer is simple when you're starting out: just recognize it. Think about white privilege, and how it impacts your life. Think about how easily and freely you move through the world, safe from the same racist suspicions that people of color face, often daily. Maybe look over the demographic breakdowns from New York City's "stop and frisk" policy, and consider what difference a little white privilege can make. When someone asks you to "check your privilege," that's all they're saying — think about how your whiteness impacts your perspective, and consider whether you might be missing something. Listen. Learn.

Nobody expects that you're going to single-handedly demolish the edifice of white privilege in America. That demands an enormous social transformation, and it can't happen in ignorance. If all of us can soberly, calmly recognize and understand our own privilege, we'll creep ever closer to that day.