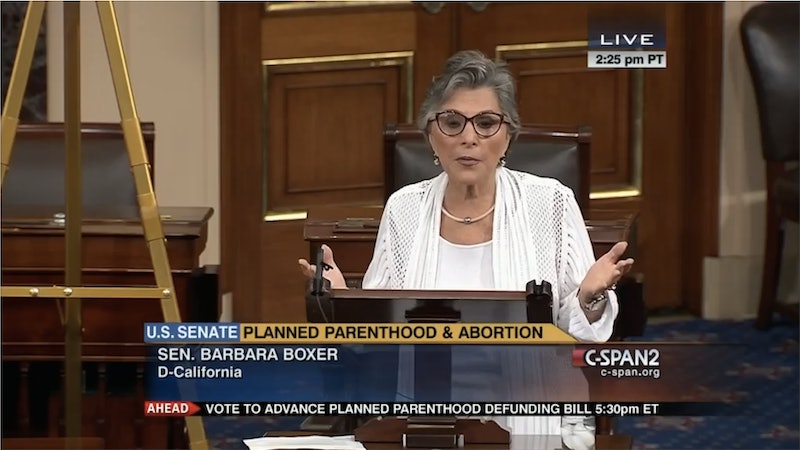 The latest attack on Planned Parenthood failed Monday after the Senate voted 53-46 on a Republican bill that would have defunded the women's health organization, a showdown that left the GOP short of the 60 votes needed to pass the measure. More than three hours of debate between both sides of the aisle preceded the highly scrutinized vote, but the most passionate effort came from California Sen. Barbara Boxer, who owned Planned Parenthood opponents with her brilliant presentation on why federal dollars should continue to support the center. Boxer's time on the Senate floor may have lasted less than three minutes, but her words will definitely carry on as the issue of Planned Parenthood continues to heat up.

During the Senate session, Boxer not only brought up her own personal experience as a woman and a mother, but also touched upon the serious impact a defunded Planned Parenthood would have on millions of women and men in the country. With statistics and a touching story from one of her constituents, the longtime senator showed why she has become a leader for women in politics. As a Californian, I've loved being represented by two strong women in the Senate, but with Boxer and possibly Sen. Dianne Feinstein both retiring in 2016, it's now a question of who else will step up and continue to hold the mantle for women's rights. (For me, next November represents a lot more than just what's happening in the White House.)

Monday wasn't the end of Republicans' misguided assault on Planned Parenthood and the accessibility of women's health care. House Republicans are set to relaunch the bid to defund Planned Parenthood in September. But until then, watch the video of Boxer's speech or read the full transcript below. You can have some solace in knowing there are people on Capitol Hill who aren't afraid of laying it all out to keep women's rights in women's hands.

I want to thank my friend for his generosity here. And I tell you, I'd really rather work with you on transportation. You know I gave birth to two premature kids, and I just don't like lectures by men about what it's like and thank God they made it. I'm pro-choice, and I just have to say, using pregnancy as a political football doesn't sit well with the people I represent and the people of this country. We have to respect one another. I respect your view entirely. I'm asking you to respect mine.

Keep Uncle Sam out of my private life and my children's and my grandkids and yours. Families will make these decisions, with their god, with their doctor. And 97 percent of the work Planned Parenthood does has nothing to do with abortion. It's primary health care.

I'll show you a particular person here. This is Doreen from California. "I went to Planned Parenthood and I talked to the clinician. She gave me a referral to a breast care center where I had a mammogram and a biopsy was ultimately diagnosed breast cancer. I was scheduled for a lumpectomy in about two weeks." That woman could have died. And you say go to community health care centers?

So this is a continuation of the Republican War on Women, and I hope we'll defeat this ill-considered bill that's about to come our way.