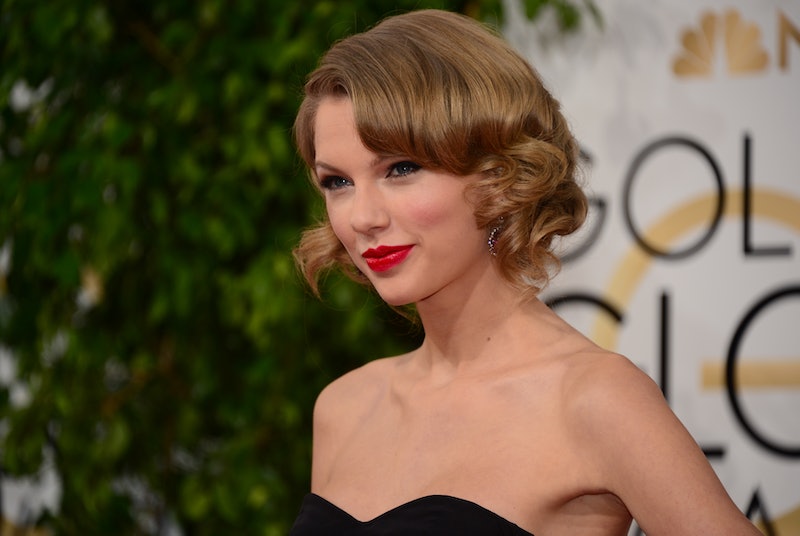 Classic, Old Hollywood glam has always been a crucial part of the Taylor Swift style and beauty playbook. The singer has a fondness for a blood red lip and her curly blonde hair can be easily fashioned into throwback-y, '40s screen siren waves. Taylor Swift covers the September 2015 Vanity Fair issue in full-on Old Hollywood glam.

Boy, did she do it right. She kept her makeup vixen-like, pairing it with chic menswear. The combo was tres sophisto!

Swift opted for a winged, kitten eye, tomato-hued lips, and big, blown back 'n' wavy hair. Notice how her blingy earrings bring out the crystal blue in her eyes.

The singer also donned a black suit, with the blazer tossed over her shoulders. Her crisp and tailored white dress shirt got a boost from her loose tie.

It's a striking, Mario Testino-lensed cover for Swift. Having her seated at a piano gives the cover a jazzy energy, as well. She just looks... comfortable in her own skin.

Are you ready to marvel at T. Swift rocking OHG?

Swift's perfectly painted pout was her signature for so long, but she's stepped away from it a bit on the 1989 album cycle. Swift has done other-than-red lips plenty of times; but for such a high profile cover, she went back to scarlet since that's her comfort zone and it works for her. Remember, she ditched makeup and went unrecognizable for her Wonderland cover.

This is Dietrich, who was undeniably a source of inspo for this cover.

The influence is there, right?

We know T. Swizzle loves her red lip. But what about menswear? She doesn't go that route all the time, but when she does, it's pretty memorable.

Swift wore a fitted, cream pantsuit to the VMAs one year. At the time, I thought it felt a bit mature for her. But as time passed, I've grown to appreciate its classic-ness.

See it from the side. With her model's height, she was totally a girl boss.

Her black pants 'n' blazer at the AMAs was simple and not something we've seen her repeat very often. Yet, it called attention to her tall and thin frame.

Swift was a total classic Hollywood swan at the Golden Globes.

The singer does step out of her comfort zone on the red carpet and for magazine covers here and there. She never goes ham, totally crazy, or outrageous, but she does experiment.

However, for this edition of Vanity Fair, she relied on her old standbys and to fabulous results with which you cannot argue.