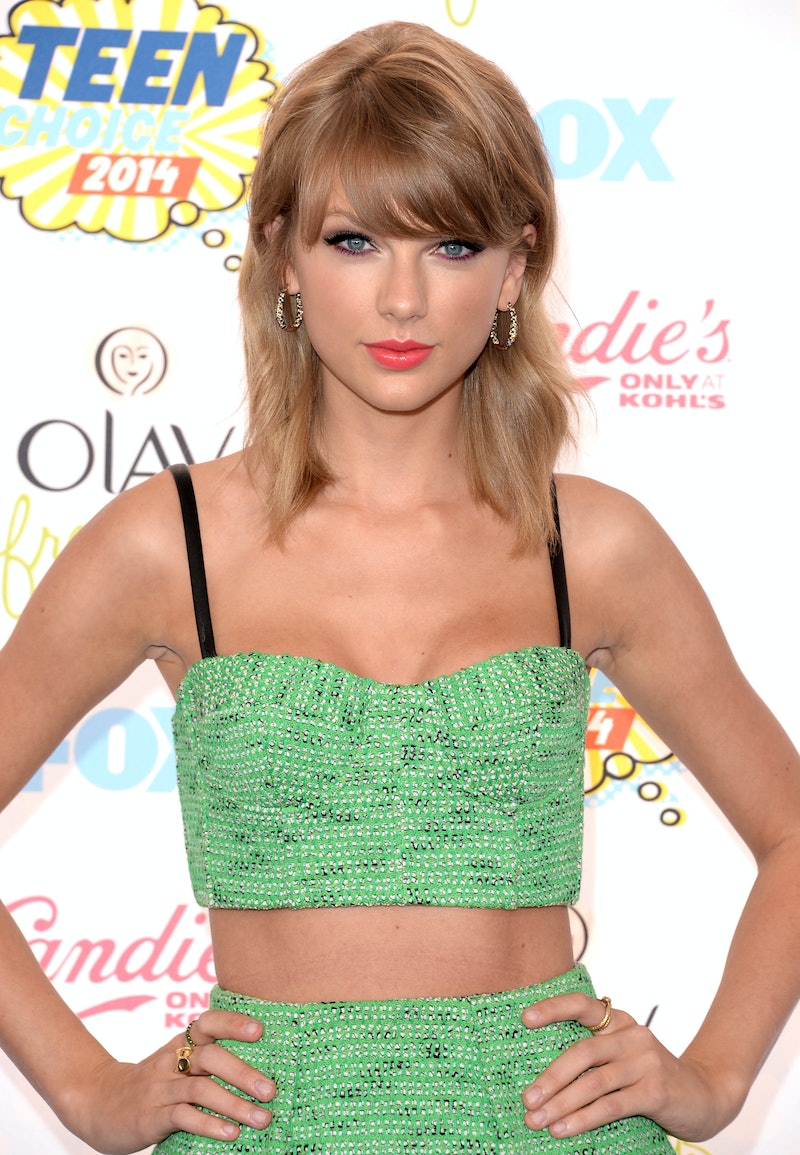 Taylor Swift's relationship with the color red, especially when it come to lipstick, has lasted longer than many of her romantic dalliances — and that's ok. A girl and her lipstick need each other and shouldn't be forced apart.

Swift can rock any shade and texture of red from glossy to matte to bright to deep. She always looks like a modern update of Old Hollywood Glam and never, ever comes across as vampy, campy, or goth. It's as though her lips and her face were designed to host stamped-on red lips since she is so freakin' blessed.

Crimson lips are her signature, her hallmark, and it's why her beauty is so classic. Swift's summer 2014 style has been pretty enviable, too.

But Swift, whose pucker was nominated for Choice Smile at the 2014 Teen Choice Awards but lost out to her pouty-lipped ex Harry Styles of One Direction, has indeed stepped out of her red zone with other lip shades. And guess what? The result was just as amazing.

As someone who would rather go the nude lip route and who simply can't do a red lip, even in these unconventional ways, I personally prefer when T. Swizzle ditches scarlet lips and plays with a lighter, softer, pinker shade. It's not that her beloved red ages her; it's just that a paler shade enhances her youth. She is, after all, just 24, and won't hit the quarter-century mark until December. Here, 10 times that Taylor Swift ditched red lips — and looked totally amazing doing it.

Swift swiped a coral shade on her lips at the 2014 Teen Choice Awards and it was a summery complement to her mint green outfit. Her simple eye makeup, which included major coats of black mascara, allowed her coral lips to be the focus.

Swift's slightly peachy, a little bit rosy, and just a hint of orange lips brought out the peaches and cream tones in her skin. She emitted such a healthy glow here. Her hue is dialed down, but not boring at all.

A whisper-light pink lip was the right choice for her metallic dress at the 2014 Grammys. T. Swizzle struts with confidence, no matter her lip hue.

Her musical bestie Lorde also tends to rock dark and matte lip shades, although the "Team" singer usually prefers a purple stick. The two talented ladies ditched their usual and expected lip looks for softer, sweeter, and equally matte shades and both looked just as gorgeous. They made the big change together! It's more fun to experiment with you looks when you have a wingwoman.

With her shaggy bangs skimming her eyelashes and golden, bronzed smoky eyes, Swift opted to go beautifully matte and nude on her kisser and she still stood out! I totally get that red works for her when she is performing on stage and she wants her fans in the back row of the stadium to be able to see her (on the stage screens, of course), but I am loving her when she is light on the lips!

Stunning, yet again, in a white ensemble with a subdued lip. It totally worked for the singer. Plus, she kept red in the look with her vampy nail polish, mmmkay?

7. Is Pale Pink Her "Other" Signature?

Guys, are you sensing a trend here? Is a soft pink her "other" signature that no one ever talks about? It seems so, as evidenced by this rundown of non-red Swift lips. This shade is a bit mauve in tone and is totally drugstore accessible; that is, Revlon and L'Oreal have several offerings of this shade, so it's easy to copy.

8. See What I Said Above

Her blue eyes are a perfect match for powdery lips, like so. Don't you love how wide-eyed and innocent she was here?

Her eyes were a bit sooty here, so she balanced things out with light lips. Again. See, it's not as uncommon as you'd think. Swift isn't solely a lady in red, as many assume.

This no-lip look let her bun and bangs be the above-the-neck focus. This rundown of Taylor Swift sans red lips proved two things: She isn't always about red and that she is absolutely stunning no matter what look she chooses!