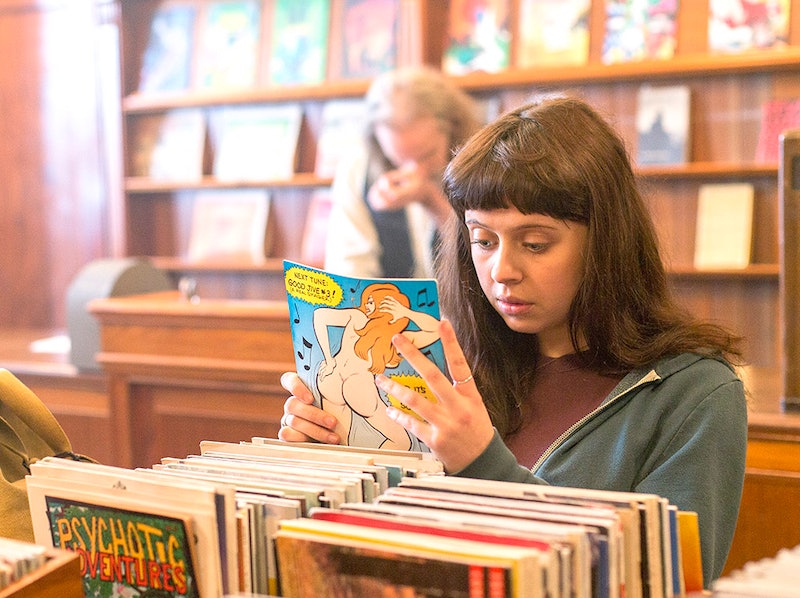 Aspiring comic book illustrator Minnie Goetz, the 15-year-old protagonist of the film Diary of a Teenage Girl, has a hard time keeping her art on paper. It animates her daily life, from the birds and hearts that circle the heads of her various love interests (most notably her mother's boyfriend Monroe) to a fictionalized version of artist Aline Kominsky who advises Minnie and follows her around ’70s San Francisco. The style of these graphic intrusions into Marielle Heller's realistic landscape closely reflects that of Phoebe Gloeckner, the author of the graphic novel the film is based on. But Gloeckner didn't create the animations in Diary of a Teenage Girl — so who did?

Brooklyn-based Icelandic animator Sara Gunnarsdottir hand-drew each animated sequence in the film. Director Heller told IndieWire during a panel that Gunnarsdottir “almost destroyed her arm" over the course of thousands of frames of animation, even necessitating physical therapy at a point. Gunnarsdottir, who had recently graduated from the California Institute of the Arts when Heller recruited her, made her feature-film art debut with Diary; she and Heller worked closely with Gloeckner's text to develop a style that would reflect the source, as well as Minnie's coming-of-age experience. But in addition to illustration, Gunnarsdottir is also a filmmaker, and according to the film's press release, has recently taken up embroidery in order to further explore the possibilities of image-making and storytelling.

"We tried to keep it a little bit in the cruder realm because Minnie's just learning and developing her artistic style," Heller said of the resulting animations in the same release. In contrast, Gloeckner drew much of the graphic novel later in life, giving the art a more sophisticated flair that didn't necessarily suit Heller's idea that the animated segments "be a little clue for us into Minnie's subconscious and her psyche."

The resulting sequences of animation intrude into Minnie's daily life, reminding audiences that this film is a candid exploration from the perspective of a 15-year-old girl. The film honors an oft-overlooked aspect of adolescent development — a teenage girl's budding sexuality — by allowing her imagination to run rampant in her lived world. No one else can see her cartoon renderings trampling the city, but we can. We're living this right alongside Minnie, and it makes the experience all the more vivid.

Said Heller, "We didn't want it to be sort of this stereotypical thing where she's a girl suddenly walking into a cartoon world." For a film based on a graphic novel, excellent animation is a must, and so Gunnarsdottir was one of the first individuals recruited to the film. The artist developed the illustrations in close collaboration with Heller over the course of two years, and the result exudes vintage San Francisco with a muted, Wes Anderson-esque color palette.

The genealogy of The Diary of a Teenage Girl's animation extends back to Aline Kominsky herself, who also makes frequent appearances in person and in Minnie's imagination in the film. Towards the outset of the narrative, Minnie writes a letter to Kominsky, in which she explains that she's an aspiring comic book artist who draws in India ink, and asks what kind of paper the artists uses. This letter bookends the film: Kominsky appears at a comic book store Minnie frequents, signing autographs, and her cartoon likeness gives Minnie advice on art and life throughout. In the film's conclusion, Minnie receives a response from Kominsky that may herald her passage into artistic, if not sexual, maturity. Kominsky, too, illustrates in India ink (though no word on the kind of paper she uses), and she urges Minnie to keep drawing.

Gloeckner's style in The Diary of a Teenage Girl graphic novel was deeply influenced by Kominsky, who she befriended growing up in the same San Francisco illustration scene, according to the Comics Journal. In turn, Gunnarsdottir's style in the film demonstrates a similar honesty that at times, even shocks. Minnie's self portraits that run rampant throughout the city belie her insecurity with their exaggerated hips and thighs, hairy legs and bulge, but they also refuse to glamorize her adolescence. She's a giant in a town of tiny humans — boys she can pick up with one hand and discard, apartment buildings she towers over — with an outsized ego and the self-doubt to match. The bounds of reality and San Francisco aren't enough to contain her. Gunnarsdottir's animations allow her young psyche to expand into a realm of imaginary that becomes its own reality for Minnie and audiences alike.