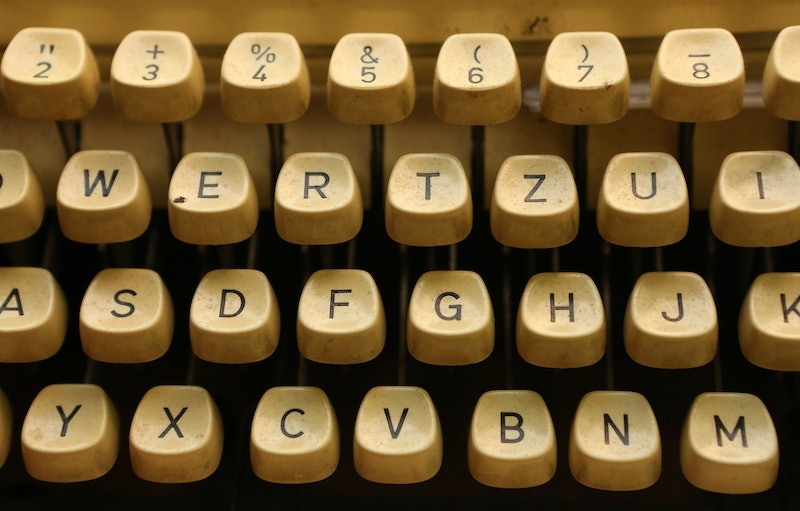 There's an article over at Jezebel getting some attention this Tuesday, and rightly so. Writer Catherine Nichols sent out the first pages of her manuscript under a male pseudonym, and as it turns out, the publishing gatekeepers think "George" is a much better writer. Eight times better, as a matter of fact.

After an extended period of writer's block and ennui — during which she'd sent out 50 queries to lackluster response — Nichols, presenting herself as George, fired off six queries to agents she'd planned to address under her real name. Within minutes, she received a response ... which quickly turned into five. Five responses. Three manuscript requests and two warm, detailed, constructive rejections. On a f*kin' weekend.

Nichols upped the ante, sending out 50 queries under the pseudonym — the same number she'd let fly under her own name. As herself, she received two manuscript requests. George got 17. Nichols grimly observes, "He is eight and a half times better than me at writing the same book. Fully a third of the agents who saw his query wanted to see more, where my numbers never did shift from one in 25."

Not only were the numbers disparate, but the quality of the responses her manuscripts received were also in two different classes. She writes:

"Most of the agents only heard from one or the other of us, but I did overlap a little. One who sent me a form rejection as Catherine not only wanted to read George’s book, but instead of rejecting it asked if he could send it along to a more senior agent. Even George’s rejections were polite and warm on a level that would have meant everything to me, except that they weren’t to the real me. George’s work was 'clever,' it’s 'well-constructed' and 'exciting.' No one mentioned his sentences being lyrical or whether his main characters were feisty. A few of people sent deeply generous and thoughtful critiques, which made me both grateful and queasy for my dishonesty."

We already know that when researchers send out résumés that are identical in every aspect except the gendered names attached to them, responses from potential employers favor the male prospects. Men are rated as better mentorship candidates, more hireable, more competent, and deserving of roughly $4000 more each year. But many studies like these focus on fields with noted gender disparity, such as STEM jobs, sports, and mass media. Given the fact that girls' language skills far surpass boys' (and how many women work in the publishing industry itself), you'd think that the number of those published would have equal gender representation, if not tipping outright toward women.

Unfortunately, Nichols' experience in the industry isn't unique. Women have been writing as men for ages. Middlemarch author George Eliot was Mary Ann Evans in real life, and the Brontë sisters adopted male pseudonyms to publish Jane Eyre, Wuthering Heights, and The Tenant of Wildfell Hall. Although Little Women was published under her own name, Louisa May Alcott wrote as A.M. Barnard to support her family.

Yes, we absolutely should be able to find bylines, garner praise, and build careers under our own names, but the state of the industry — even though it's improving — makes it impossible for us to criticize those women who choose to write as men.

Unfortunately, it seems that a male name still affords more respectability, saving a woman writer from being pigeonholed into the problematic niche of Women's Fiction, which Nichols calls "a dislikable name for a respectable genre." The adoption of masculine pseudonyms also allowed these women to write without fear of abject rejection, as Jo "They're Not Fairy Stories" March experiences in Alcott's novel.

Even today, the tradition continues. Nora Roberts, the prolific romance writer, became J.D. Robb to publish detective mysteries; she's wildly successful under both names. Joanne Rowling has written under two masculine pseudonyms: J.K. Rowling and Robert Galbraith. But why should these modern women take on masculine guises in order to be successful in their craft?

Because, unfortunately, the times haven't changed that much. The public at large labors under the delusion that men will not read books written by women, and women writers are continually snubbed for literary accolades, such as awards, reviews, and publicity. VIDA, the Women in Literary Arts organization, counts women's contributions to literary journals and other publications each year. The 2014 VIDA Count showed promising leaps in women's representation, but many of the numbers remain depressingly low. We've come a long way, baby, but we've still got a long way to go.

For Nichols' part, she doesn't regret her experiment. She admits that sending out her manuscript under a different name was a breach of etiquette, but maintains that it got her further than coloring within the lines. She closes:

"There’s a fundamental change in how I look at my work now, how I look at the novel I already wrote and the one that I’m working on now. I quit sending out queries entirely, and used the critiques that George got to improve the book—a book I would have put away in frustration long ago if I hadn’t tried my experiment. The edited draft went to the agent who now represents me, after she got in touch about a nonfiction piece I had written under my own name. Patience, faith, playing by the rules—the conventional wisdom would never have brought me here."

The women who wrote as men years ago weren't playing by the rules, but they were playing the game. The rules say "Find Your Voice," but the game says "Succeed," and if you can't do both, then you've got to wiggle. Yes, we absolutely should be able to find bylines, garner praise, and build careers under our own names, but the state of the industry — even though it's improving — makes it impossible for us to criticize those women who choose to write as men. It's the only option some of us have.