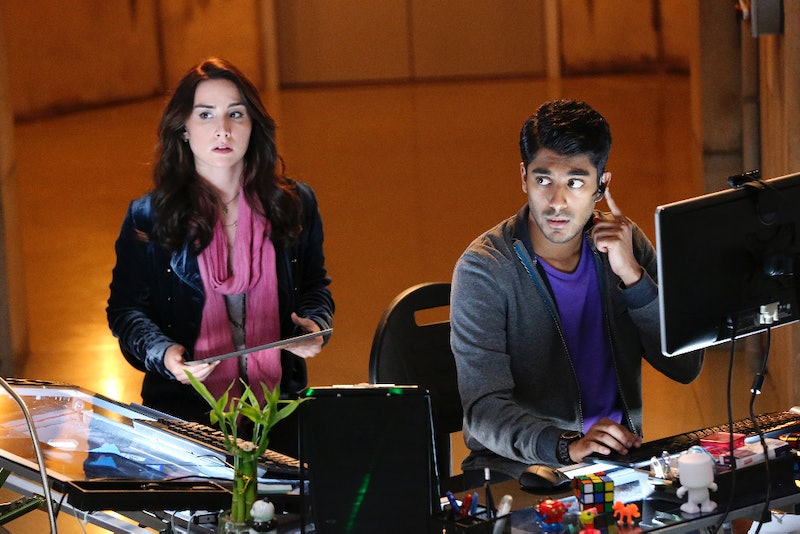 Good news, Stitchers fans! You don't have to worry about unsolved mysteries and shipping needs after Tuesday's season finale. Stitchers was renewed for a Season 2 on ABC Family. We haven't seen the last of Kirsten, Camile, and the whole Stitchers program gang. The summer science fiction series is a huge success! [Update: Season 2 will be back March 22.]

The show is about a woman who hacks into the brains of murder victims to assist in their unsolved mysteries. However, like most dubious scientific programs, there is a conspiracy afoot. The woman, Kirsten, is definitely more involved in the Stitchersprogram than she ever realized. To make matters even more complicated, Kirsten has a condition which renders her unable to perceive time, which helps add to the mystery in terms of her own memories.

However, time is important because Stitchers is coming back! I would guess that ABC has renewed it for another 11 episodes in the summer rather than the fall season, though it's possible the series could get a timeslot bump and a higher episode order. Let's just celebrate the fact that it was renewed for now. Until the show returns, here are a few things you could watch or binge to pass the time while you wait for Season 2.

This science fiction series from Joss Whedon had a controversial subject matter. In the Dollhouse, volunteers (or so we believe) are wiped and implanted with new personalities and memories before being bought for a variety of tasks. The show only had two seasons, so it's a light commitment.

Another "canceled too soon" series, this plays on the similar concept of asking murder victims who killed them. Ned, played by Lee Pace, is able to revive the dead for 60 seconds without consequences. That's just enough time to ask a few questions. However, as the Stitchers also discover, it's not always that easy.

Not only should you see the 2002 Tom Cruise movie about a world in which three children with precognition powers are able to stop crime before it happens, but the above spinoff television series premieres this fall and looks fantastic.

While this is also a movie, it also deals with the fascinating concept of brain hacking. If you haven't seen this romantic comedy that questions what would happen if we could erase a failed relationship from our brains, you've gotta sit down and watch it.

While Stitchersis on ABC Family, there's also this series on The CW. Liv is a zombie who inherits personalities when she eats brains, and uses that to help solve crimes.

Finally, the last science fiction crime series that you could binge on while waiting for Stitchersto return is Fringe — which is streaming on Netflix and focuses on FBI agents who experiment with the paranormal.