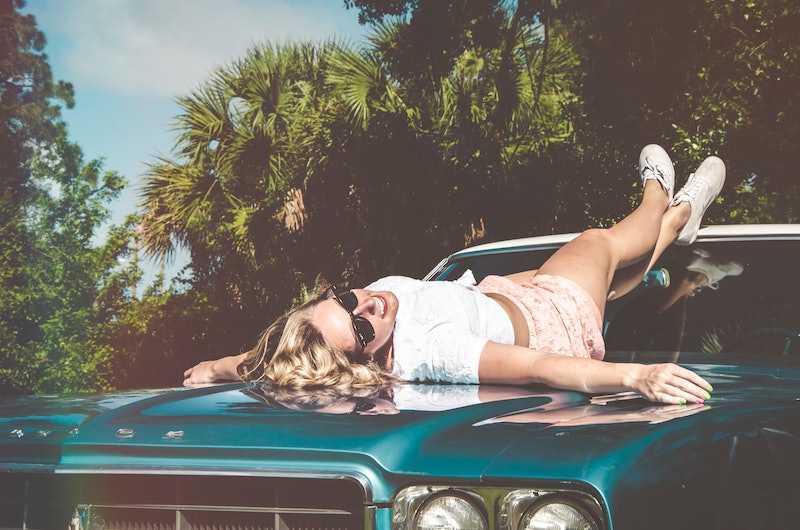 I'm a major proponent of all things body positivity and I think it's super important for feminine people — and any oppressed group for that matter — to reclaim power over the parts of their identities that are stigmatized. That includes camel toe. It may not be as much of a source of pushback put on women as, say, shaving or having conventionally attractive breasts and butts, but camel toe shaming seriously deserves some contemplation.

In June 2015, Leandra Medine of Man Repeller wrote about this concept on her blog, posing the question: "Can We Take Back The Camel Toe?" "Why is it that when a man experiences bulge he is canonized as Hero among his lifting class, but when we, givers of life and takers of nothing, fall victim to the inevitability of vintage denim-fostered camel toe, we’re gross?" she asked. After careful consideration (and the use of common sense), we all may come to the same answer regarding whether or not we can reclaim the CT: Why not?

When I was younger, I heard the term "camel toe" thrown around by those describing a woman who was apparently making some kind of fashion faux pas, but I didn't realize (or care) what the term actually meant. It wasn't until a few years ago that I realized it was referring to being able to make out the general shape of someone's vulva through their tight-fitting bottoms. In more extreme cases (and according to the Wikipedia definition of the term) it means the pants are tight enough (combined possibly with a commando situation underneath) that they accentuate and ride up the groin area, exposing the outline of a person's labia. But... what's so gross about that?

From my experience, it seems that as soon as a woman or feminine-presenting person is seen sporting hot pants or any kind of spandex-heavy fabric, she is made to feel self-conscious about the way her pants might be riding up. Times that are meant to act as "me time," and activities that are supposed to be fun, healthy, and relaxing (be it going out dancing or working out or chilling in some leggings) are immediately tainted by feelings of shame, self doubt, and discouragement. If you ask me, though, concerning ourselves with properly hiding any semblance of a vagina in tight clothes is counterproductive when it comes to self love and care.

There's a huge gender divide at play here, as Medine pointed out in her blog post. People with vaginas simply cannot swagger along proudly with their junk on full display. That would be entirely unacceptable. There are articles upon articles about how to hide camel toe out there, and the technology needed to avoid the possibility of the phenomenon altogether. But why do we have to be so ashamed of our feminine genitals? Why does the sheer outline of them equate to a fashion faux pas, not to mention a source of social embarrassment when caught in public with camel toe?

Personally, my camel toe doesn't embarrass me. I love wearing black leggings as pants during the fall and winter months, which gives me considerable amounts of camel toe. Unless someone rudely points it out to me, I don't feel self conscious. It may be considered a bit of a revealing or sexy choice to wear something that accentuates your labia, but it's most certainly not gross. When I wear tighter shirts, you can see the curve of my breasts pretty obviously through my shirt. So why is that kind of display totally OK and even deemed "attractive" when wearing clothes that hint at the presence of a labia isn't?

I'm usually more comfortable in my skin when sporting a skintight silhouette from the waist down, and will don my camel toe at work and family parties in the same way I wouldn't think twice about wearing a tighter top. My body — and all feminine bodies — needs to stop being sexualized so highly. I mean, at the end of the day our fear of camel toe and the taboo we place on it must tie in to sexualization. Feminine bodies are under such scrutiny that they often feel perceived as purely sexual, and even vulgar when you can see too much of them.

So let's please stop getting grossed out by one another's bodies or making fun of celebrities with camel toe along the way. Our bods are beautiful and worthy of celebration. We shouldn't have to worry about whether or not those leggings or yoga pants are showing off "too much." If you want to feel sexy and comfortable, and the way you feel sexy and comfortable is by showing off your body, then rock the hell out of that camel toe. If Queen Bey can do it (and look damn sexy while doing it), then so can we.