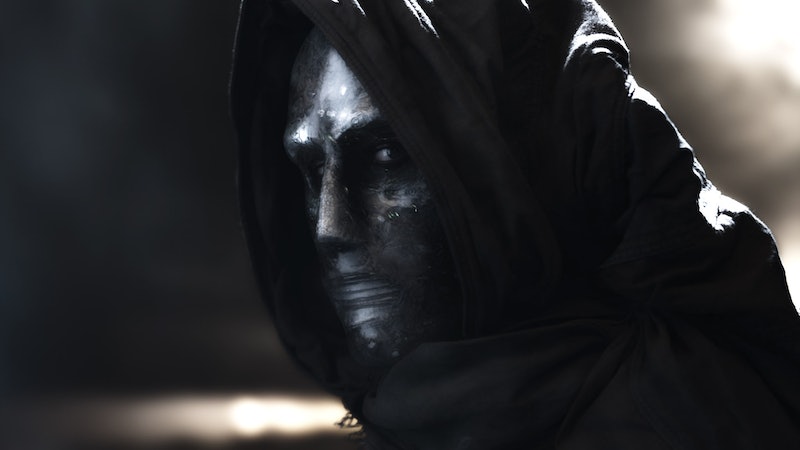 Fox's new Fantastic Four reboot recasts all the lead roles from the Marvel Comics heroes' original movie franchise, which bowed in 2005. Miles Teller takes over the role of team leader Reed Richards/Mister Fantastic, Kate Mara plays Richards' love interest, Sue Storm/Invisible Woman, Michael B. Jordan has dealt with unnecessary controversy as Sue's brother Johnny Storm/Human Torch, and Jamie Bell rounds out the team as Ben Grimm/The Thing. But no depiction of the Fantastic Four would be complete without their nemesis: Doctor Doom. So, who plays Doom in Fantastic Four ?

In the new film, Doom is portrayed by actor Toby Kebbell. Kebbell has a pretty fantastic sci-fi villain resume under his belt already, having played bad ape Koba via motion-capture in last year's Dawn of the Planet of the Apes. Doctor Doom, though, is a different animal entirely (figuratively and literally). That's because out of all of the villains in Marvel's impressive stable, which includes guys like Magneto, Loki, and Green Goblin, Doctor Doom is probably the most iconic master of evil to ever come out of the House of Ideas. And Kebbell really has a chance to make his portrayal of Doom the definitive one, despite conflicting reports regarding the film's depiction of him.

So now that you know that Doom is going to be a major character, I should probably explain why he's so important to the franchise. Here's a little background from the comics on Marvel's greatest villain, Doctor Doom.

Let's face it, if your last name is "von Doom," you're predisposed to being a bad guy.

His Parents Were Gypsies

Although the use of Romani people in pop culture often results in stereotypes and discrimination, Doom's parents weren't evil like many Hollywood imaginations of Gypsies. And even though his mother was *technically* a witch, she was still a loving mother, and her death (and Doom's father's) early in Doom's life are what lead him to the dark side.

He's Into Magic And Technology

Unlike the Fantastic Four, Doom doesn't actually have any superpowers of his own. Instead, he uses a mastery of sorcery and his own brilliant intellect to mold himself into one of the most powerful people in the world. In other words, greatness was not thrust upon him, he sought it out himself.

He Has A Reason For Hating The Fantastic Four

Doom studied in the U.S. as a young man, and he met Reed Richards and Ben Grimm in college. While there, Doom was working on a machine that would allow him to communicate with the dead (he missed his parents, OK?) when Richards warned him that it wouldn't work. Doom ignored Richards' warnings and used the machine anyway, which then literally blew up in his face, giving him the scars and the reason to wear his iconic mask. He blames Richards for the result, and has hated him and the Fantastic Four ever since. I admit, it's not much of an excuse, but he had to blame somebody for his failure!

He Rules An Entire Country

In the comics, Doom rules over his native country of Latveria, a fictional (but totally real-sounding) Eastern European nation. He lives in an actual Medieval-style castle on top of a mountain that's protected by Doombots — robot soldiers that look like Doctor Doom. Can you think of a better evil lair?

Unlike most villains who are all talk, Doom actually gets sh*t done. He stole the powers of one of the universe's essential beings in the first Secret Wars event, and rules the entire world in Marvel Comics' current continuity. So apologies to Dr. Evil, but I think we all know who the baddest doctor around is.