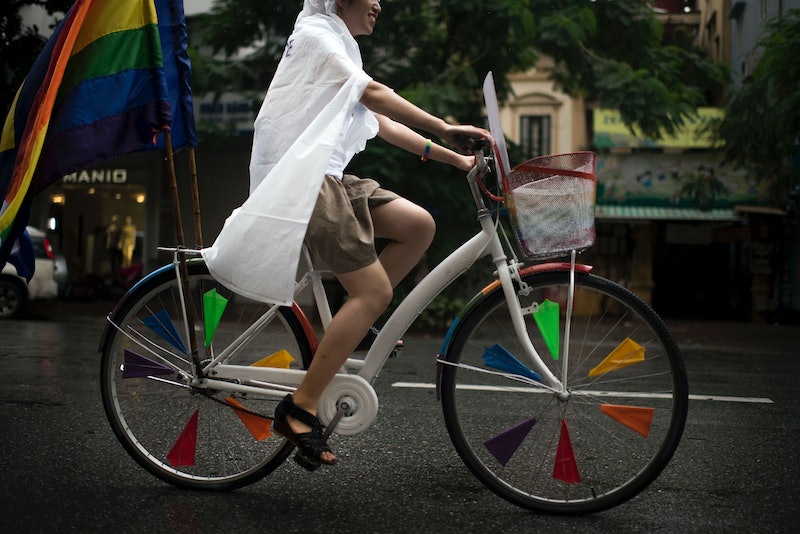 If you've ever gotten into an argument with someone about sexual orientation, chances are that one of you eventually brought up the Kinsey Scale. If the mention caught you off-guard (and led you to sneakily google it when you thought your opponent wasn't looking), consider this your guide. The Kinsey Scale — an early method of describing the spectrum of human sexuality, created by pioneering sexuality researcher Alfred Kinsey — may not be the most accurate tool we have to define our sexuality, but it's certainly been one of the most historically influential. You could even call it one of the most significant ideas in the history of human sexuality. Not shabby for something you can sketch out on the back of a bar napkin.

First things first: The Kinsey Scale is not an actual test. Rather, Kinsey positioned people on the seven-point scale — where a rating of 0 meant that you were "exclusively heterosexual" and a rating of 6 meant that you were "exclusively homosexual" — based on hours of interviews. But the main thrust of it is that humans don't really fit into categories like "straight" or "gay" — which you wouldn't think we'd need to have explained at this point. But many of us still do — and the Kinsey is a neat way to outline it simply.

You aren't meant to come away from this guide thinking that the Kinsey is the only option for self-definition; if anything, questioning it is a pretty valid way of determining how you feel about sexual identity, fluidity, attraction, and experience. But it's been one of the basics of queer identity since the '50s. So if nothing else, consider this an important history lesson.

The Kinsey Scale was invented by Alfred Kinsey — a researcher into human sexual behavior and emotions — and his research partners in 1948. (Liam Neeson played Kinsey as a charismatic sort of dude in the 2004 film Kinsey.) Kinsey's revolutionary twist on the study of sexual behavior was to actually ask people about their own sex lives. Kinsey asked many, many people. He and his colleagues discovered that, when you looked through the deepest fantasies and admissions of sexual adults, human attraction rarely ran along the straight lines (pun intended) of homosexual or heterosexual. He famously said in his 1948 book The Sexual Behavior of the Human Male, which debuted the Kinsey Scale theory, that "the world is not to be divided into sheep and goats."

2. It Conceives Of Sexuality As A Spectrum

The Kinsey Scale isn't so much a scale as a spectrum. Kinsey and his partners came up with the idea that, contrary to the popular idea of a two-point scale of human sexuality — containing only gay and straight identities as options — there were considerable shades of gray in between, and that most humans could be attracted to both sexes to different degrees. For 1948, when sodomy was still largely illegal across the USA, this was the sort of notion that could land you in jail.

3. You Use It To Classify Yourself As A Number From 0 to 6

The Kinsey Institute, which aims to continue Kinsey's research into human sexuality, has the entire spectrum in full on its website. Here are the categories of Kinsey's scale, in the official terminology:

0- Exclusively heterosexual with no homosexual

Note that there's a lot of wiggle room here. How do you define "predominantly," "incidentally," and "more than incidentally"? Importantly, Kinsey took into account both behavior and feelings of attraction to determine your "Kinsey number," so being attracted to members of the same sex still counted, even if you were in a monogamous straight relationship and never acted on the flirtation.

4. The Scale's Treatment Of Bisexuality And Asexuality Has Come Under Fire

The Kinsey Scale is, fundamentally, based on how many times in your life you feel or act in a sexual way towards one gender or another. This is a problem for some people, particularly some sexual theorists who say that the "technical definition" of bisexuality on the Kinsey Scale — a 3, equally attracted both ways — doesn't encompass the complexity of bisexual experience and invalidates people who feel more like 2s or 5s but still identify as bi.

It's also, as Patrick Richards Fink pointed out in the Huffington Post, a bit alienating: It depicts bisexuality as half-and-half, not a discrete identity on its own. And are feelings of sexual attraction to a particular person necessary to determine an identity? If a gay person never meets a person of the same gender to lust over, are they still gay? (This is the "if a tree falls in the woods and nobody on the Kinsey Scale hears it" argument.) And asexuality? On Kinsey's scale it simply doesn't exist, which is definitely problematic.

5. There Are Other, More Complex Sexuality Scales

The Kinsey Institute itself points out two other possible scales about human sexual identity that take into account other factors. One is the Klein Sexual Orientation Grid, developed by Fritz Klein, which is a more complex continuum. It takes into account emotional preference, social preference and lifestyle, rates sexual attraction as separate from fantasies or sex itself, and includes how you define yourself and how you've felt about your orientation over time — in the past, right now, and how you may feel in the future.

The other is Michael Storms' axis, developed in 1980, which does something different: it graphs sexuality on two axes, Y and X. Instead of using behavior or feeling, it uses homoeroticism and hetero-eroticism as its main categories. This is a more accurate depiction of human sexuality because it actually includes asexuals, who sit at the base of X without any attraction to anybody.

6. Your Number On The Scale Can Change

Kinsey was entirely on board with the idea that your position on the scale could shift; it was an integral part of his thesis that your "number" could change as your sexuality developed, and that you could move up and down the board like a checker piece over your life. To him, a number didn't stick for life: it was a temporary measure of your current feelings, designed to clarify things.

As we've begun to understand more about the possible fluidity of sexual identity, we've uncovered more evidence that a number doesn't define you permanently. In Sexual Fluidity by Lisa Diamond, she explores the studies that asked 50 different bisexual men and women in San Francisco about their orientation in the 1980s — twice, five years apart. Their Kinsey numbers usually differed by the second interview, sometimes radically.

So if you want to impress a sexuality major on a date, give them your Kinsey number — but be prepared to get into an argument about grids, fluidity, and whether sexual labels are outdated. Kinsey may be over half a century old, but it's still got the potential to cause some very sexy uproar.