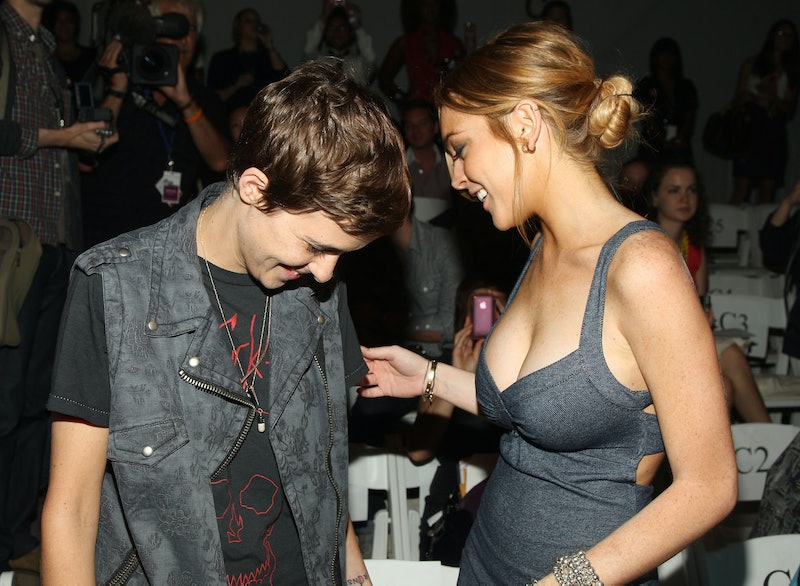 Bisexuality isn't exactly a modern concept. It's been around for a long time in many cultures — from the ancient Greeks and Japanese to Native Americans. But that hasn't stopped bisexuality from being sidelined or negated as imaginary, from people as illustrious as Sigmund Freud, who once declared, "A man's heterosexuality will not put up with any homosexuality, and vice versa."

On Bisexuality Awareness Day, it's important to remember that our modern ideas of sexual orientation and codified sexual identity haven't been present throughout history. Many cultures had no concept of "identifying" as bisexual, and many of them had problematic attitudes towards homosexuality in general. It took Alfred Kinsey's spectrum of sexuality in 1948, rating attraction to the same or different genders along a scale of 0 to 6, for the modern idea of bisexuality to fully emerge, but, despite its long history, we still have a long way to go.

However, there are some aspects of bisexual history that can be verified, through examining texts, records and art of various periods. The main problem? It's all (predominantly) about dudes. Why do they get all the fun?! (Also, so much for the stereotype that male sexuality is more fixed.)

Here is a brief history of bisexuality, throughout the cultures and ages.

The concept of a definitely heterosexual/homosexual divide didn't really exist for much of the heyday of Ancient Greece — at least for men. Young men were expected — indeed, in some cases encouraged — to enter into relationships with older men. It was meant to give them experience and wisdom, and it certainly didn't impact their later chances for marriage.

Some of Greece's most famous heroes in myth were bisexual: In Homer's Iliad, it's implied that Achilles has relationships with both women and his friend and sparring partner Patroclus, and this isn't depicted as anything unusual. Macedonian conquerer Alexander The Great and Roman emperor Hadrian openly maintained both wives and male lovers in public; and when Hadrian's beloved boyfriend Antinous killed himself, a heartbroken Hadrian built him a city, Antipolis, in Egypt.

Even Zeus, the epitome of a he-man god, took time out from seducing ladies while disguised as a swan to have a male lover, the famously beautiful Ganymede. Clearly, this wasn't regarded as much of a problem. But the lines were clear: Bisexual relations had to be between a younger and an older man, both of whom were free-born.

Bisexuality was a part of ancient Japanese society in several contexts. It was allegedly common among the famous samurai, or warrior class: Young boys would be trained by older male samurai in the complicated codes of honor and battle, and it was apparently expected that the two would become lovers. This was called shudo, and was supposed to result in a lifelong bond of friendship, even though the sexual component was expected to end once the young man came of age and sought a wife (a very similar model to ancient Greece). The same idea was prevalent in Buddhist monasteries, with older religious figures such as monks maintaining sexual relationships with younger acolytes.

In certain eras of ancient Japan, there were believed to be three genders: woman, man, and attractive young man. Adult men weren't expected to be attracted to one another, but sexual relationships with both women and younger men were acceptable. Indeed, the "ideal" situation, a few poems suggest, was to have partners who were both young women (joro) and attractive young boys (wakashu). Bisexuality was viewed as much more acceptable than homosexuality.

Native Americans are frequently left out of histories of bisexuality, but the mythos of "Two Spirit" people — members of a tribe who were born with both the male and female spirit — indicates that the idea was present, in its own way.

"Two Spirit" people were considered sacred in their androgyny, although Spanish onlookers condemned them as sodomites. They were leaders, took on both male and female roles in society, and were treated with great respect by a majority of tribes. However, the line between gender identity and sexual identity is muddied here: Two Spirit people could have both same-sex and heterosexual relationships, but the concept of the Two Spirit is most often used today to discuss transgender and androgyny history, rather than bisexuality.

The word bisexuality, as we currently use it, was coined by Charles Gilbert Chaddock in his translation of Kraft-Ebing's Psychopathia Sexualis (pictured) in 1892 — but don't let that fool you into thinking that the world before 1900 was open to bisexuality. England had an anti-sodomy law, known as The Buggery Act, which made sodomy illegal. It stayed on the books in various forms until 1861 —and consensual homosexual acts weren't made legal in the UK until 1967.

Despite a few bisexual appearances in the media — the 1914 film A Florida Enchantment featured a bisexual character, the first in American film — America was hardly a paradise for bisexual people either. Thomas Jefferson drafted a law that threatened men guilty of sodomy with castration in 1779, but he was actually trying to be liberal: the penalty at the time was death. His law didn't pass.

Indeed, up until homosexuality was declassified as a "disorder" in 1973, bisexuality was also viewed as a mental disorder, to be treated by castration, medication, electric shock therapy, hypnosis, and whatever else you had to hand. An entire industry thrived on machines that could 'convert' bisexuals and homosexuals to "normalcy."

Sigmund Freud, the father of psychoanalysis, put forward a controversial theory about bisexuality in a book in the 1920s: the idea of innate bisexuality. Based on the knowledge that in the womb, human babies are hemaphroditic, Freud argued that attraction to both sexes had its root in that developmental period where, floating in ectoplasm, we weren't one gender or another. Freud thought that homosexuality of any kind came from trauma that prevented people from developing "normally," and famously attempted hypnosis as a "cure."

The first understanding of bisexuality as part of a spectrum of human sexual orientation came with pioneering behavioural scientist Alfred Kinsey. Kinsey's famous Kinsey Reports, based on thousands of interviews in 1947 and 1953, were groundbreaking in a number of ways, but one of Kinsey's largest contributions was the Kinsey Scale.

The Kinsey Scale depicted human sexual behavior as a spectrum from 0 to 6, with 0 being complete heterosexual and 6 being complete homosexual. Not only did bisexuality now have a name, it now had a way of self-defining. Kinsey himself was possibly bisexual, and his research — though it was done very differently to similar studies conducted today — showed a much higher prevalence of bisexual behavior and attraction by the average person than anybody had really imagined. There was, obviously, a massive scandal.

With the increasing voice of LGBT activists in the 1960s, from the Stonewall riots to the first Gay Pride march, bisexual activists came to the fore, and became prominent parts of the movement in the U.S. — even if they still occupied a slightly controversial space among gays. Bisexual activist Donny The Punk formed the first on-campus LGBT group in 1966, and bisexual Brenda Howard held a huge role in creating the first Gay Pride march, in 1969.

By 1974 bisexuality was considered "in": Time magazine and Newsweek ran stories on "bisexual chic," talking about androgynous celebs such as David Bowie and Elton John and the popularity of the Rocky Horror Picture Show , and in 1976 the San Francisco Bisexual Center was founded. Fritz Klein attempted to refine the Kinsey Scale's definition of bisexuality by publishing his Klein Grid in 1978, which has 21 parameters — but it was never fully adopted.

It wasn't until the '90s and 2000s — with bisexual starlets like Lindsay Lohan, Anna Paquin, and Evan Rachel Wood coming out in greater numbers — that bisexuality became as accepted (at least among women) as it is in pop culture today.

This kind of appreciation for sexual fluidity without labels appears to be on the upswing, while the term "bisexual" may not be. As the Advocate reports,

Reliable data has only emerged in recent years, but there are now several studies that have found that 10 to 14 percent of American women describe themselves as mostly, but not completely heterosexual, and 6 to 9 percent of American men who self-identify the same way ... And the term bisexuality “doesn’t quite capture a lot of what the young people were feeling,” [one researcher] says. For instance, he encountered young men who might say, “I’m really attracted to women, but I wouldn’t rule out the possibility of a guy,” he notes.

Whether the term bisexual will one day be replaced by more en vogue labels like "queer" and "fluid" remains to be seen. But one thing's for sure — we who are attracted to both genders have always existed, and we're here to stay.